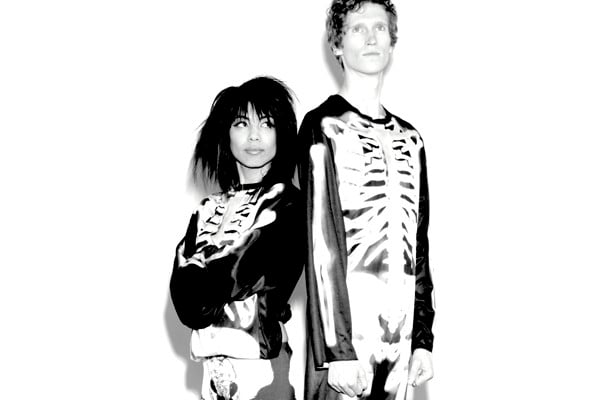 Louis Cole and Genevieve Artadi have been making quirky, ultra-syncopated music together since 2010 and posting attention-grabbing videos on YouTube for almost as long. After being convinced by Louis’ friend Jack Conte (of Pomplamoose) to start making videos for the internet, the duo posted a cover of Justin Bieber’s “Baby” complete with Viking hats and slingshot guitars. Since that first effort, the band’s video production skills have come a long way, winning them opportunities to perform in Switzerland and at Bonnaroo, as well as a lot of new fans.

Recently, KNOWER has posted a spate of new videos on their YouTube channel featuring original songs and re-imagined versions of pop songs. The video for their cover of Daft Punk’s “Get Lucky” (above) showcases the band’s ability to create dynamic, projected animations, which they also use in their live performances. “It was Genevieve’s idea to experiment visually and I was hooked right away,” explains Louis. “Growing up I really liked the movie Tron and the computer animation that was happening in the mid-’90s, so those have been really big influences. We use Final Cut Pro and Cinema 4D for visual effects, or we’ll use whatever we have laying around like interesting lights or a weird camera.”

KNOWER’s most recent release, Let Go (March 2013), is an atomic collision of Jazz and Electronic Dance Music. The album was born from Louis’ growing interest in production and “electronic sounds” and was at first planned as a solo album. Luckily, Louis asked Genevieve to collaborate on the project by writing lyrics and melodies, and lending her punchy, soprano vocals to the tracks. Some of her influences are Nat King Cole, Ella Fitzgerald, and James Brown, who she describes as, “Singers who could make the most music in the simplest way.”