Lovers – “A Friend in the World” album review

The first thing that jumped into my mind when I heard this album by Lovers is the ’90s era. A few of the songs seem like they should have been featured on The Perks of Being a Wallflower soundtrack, or that they should be the music featured in a scene of a My So-Called Life.

Lovers is a band that continues to feed the ‘successful band’ mentality that people associate with the Pacific Northwest, and they sound as if they have been influenced by other bands in the region, such as Postal Service or Death Cab for Cutie.

A Friend In the World has a somewhat electronic, psychedelic feel that is beautifully fused with gorgeous vocals and a touch of acoustic instrumentation. These themes are threaded throughout the entire album, and it’s easy to fall in love with all of the songs instantly. The group seems to strike the ideal balance of technology and nature with their latest record. 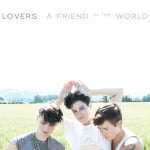