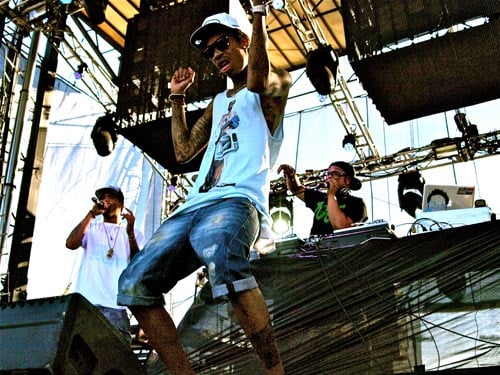 Wiz Khalifa, as underground as he was, doesn’t have much more time before the spotlight gets the best of him. His rhymes and his messages are not a joke. He aims to make bangers, catchy dance tunes with superficial lyrics – easy to access, but there’s not really much to hear. This kind of rap music has its place in hip-hop culture, sure, but then again anybody with a little sense and style can get on the mic about money, drugs, and sex and garner people’s attention. Yeah, the beats were dope. Sure, Khalifa was an excellent entertainer, articulating well and dancing on stage. Maybe it was the bumping bass or the lack of hip-hop at music festivals, in general, that swayed me to (at least) appreciate the set for what it was – that is until his entourage rolled by me on my way to the other stages. Leaning out the window, asking who’s got milk, and puckering their lips at all of the ladies passing by, my heart sank. Fooling around on stage is one thing, misogyny is more easily ignored and justified in that realm, but direct objectification outside of the context of live performance leaves little room for redemption. Hip-hop can have class, you know, and class can be fly if you’re willing to use a little creativity.