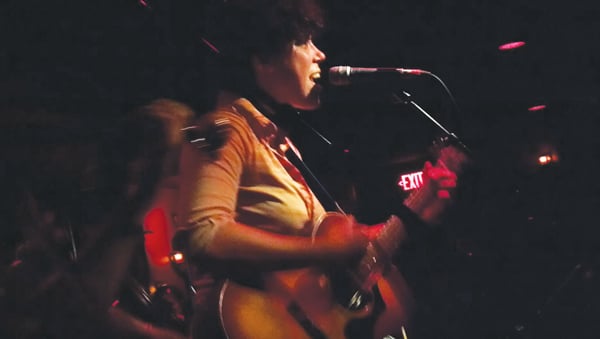 Dark and intimate, the Lizard Lounge was packed to capacity. The red lighting and spattering of rugs on the floor gave the place a cozy feeling as couples sat around small tables. Despite being a small venue, the bands used the space well and put on terrific performances well worth the $10 cover charge.

The show started off with Coyote Kolb, a local Boston band. Featuring an impressive slide guitar with rich sound, this five-piece group opened the night with a chill and bluesy feeling. Next up was Abbie Barrett, a folk rock band from Somerville, whose songs ranged from dating to alcoholism. Fun and engaging, Abbie Barrett drew a large and supportive crowd. With vocals reminiscent of Ingrid Michaelson, Barrett provided an entertaining and enjoyable set filled with surprises – the drummer actually used a tambourine instead of sticks during one song to create an inventive and new sound.

The real show-stealer of the night was the Kristen Ford Band (pictured above). Made up of a cello, violin, stand up bass, back up electric guitar and Kristen Ford on a Telecaster, this local band really delivered musically and lyrically. Her vocals were pleasantly husky and clear followed by crisp upstrokes as the songs took on a reggae vibe. There was a great rhythm and pace to the lyrics as harmonies from the fiddle and cello players blended nicely. The stand-out song of the evening was “Fairweather,” a sad yet beautiful number about lost love, featuring a nice use of finger picking and meaningful lyrics. The band clearly has a passion for music and the crowd responded in kind with a resounding request for an encore. It was a great night for local music, especially for the Kristen Ford Band.