The 2013 incarnation of Cincinnati’s Ironfest, a Rock and Roll honorarium for Cincinnati ‘s  “Iron” Mike Davidson, took off at the Southgate House Revival on the weekend of November 1 & 2.  The fourth annual event, sponsored by friends and supporters from the local music community, was held in celebration of his memory as well as to raise funds for his family.  Over 30 bands performed on the venue’s three stages during this year’s blowout. Keith Jones and the Makeshifts

Because it was held the weekend after Halloween, there was a smattering of attendees in full costume.  A spangled white suited “Elvis” was in the building, as well as two “Miley Cyrus” clones, complete with huge teddybear backpacks and twin-topknotted hair.  There were assorted other “punks,” “sock-hoppers” and “zombies” rounding out the colorful crowd.

Friday night began with Red Beast, featuring a long blond-haired lead singer called Adolf Christ, so it was no mystery at all what this bunch was about.  Aggressive and heavier than Hell itself, spitting out menacing lyrics, they were perfectly suited for the “iron” mood of the evening. Switching gears into a lighter mood, Keith Jones and the Makeshifts provided a playful throwback rockabilly sound that had their audience hopping on the dance floor during their set.  Things were going great until the stand-up bass player decided to balance atop his instrument while playing, toppled over, and popped the bridge off of it in the process.  Undaunted, he continued to thump away for the remainder of the act with hardly a hitch, much to everyone’s delight. 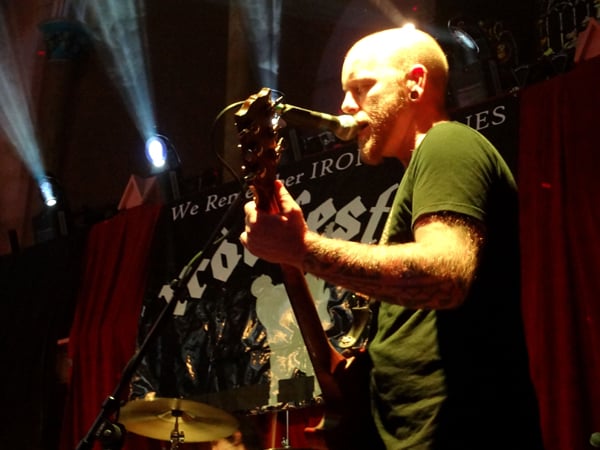 Valley of the Sun

Saturday night’s lineup attracted more people, and an early entry was Mala In Se, a genre-bending mashup of angst-ridden yelps and wails and discordant, sometimes woozy guitar riffs running blindly over a seemingly chaotic rhythm section – yet the whole of it somehow remarkably always ending on a dime when the songs were finished.  The cacophony this three-piece created was mesmerizing in its crash-and-burn precision.

Detroit’s Joe Hertler and his accompanying band the Rainbow Seekers performed later in the smaller Lounge.   Their soft folk pop, enhanced by Joe’s sweet, melodic tenor, was a brief break from the more sonic lineups of the night.

Valley of the Sun, a powerful, heavy, guitar-driven rock trio, took over the Sanctuary stage and attracted a large crowd during their show.   The new song that they premiered at Ironfest was a scorcher; these guys showcased some great presence and energy. Whether Ironfest will survive to rise again next year seemed to be in the cards, judging from this year’s enthusiastic response.