The Kin live in Cambridge, MA New York City based trio The Kin made an early show at TT The Bear’s place  before the weekly “Heroes” dance – the night had the energy of a sold out show at 11pm. Coming off a 20-date opening slot for P!nk, Australian born brothers Isaac (keys/vocals) and Thorald Koren (guitar/vocals) make up 2/3rds of the band. The third player is Shakerleg, whose taped-up fingers aid in his stick-less drumming style, along with a large djembe standing in for a kick drum. 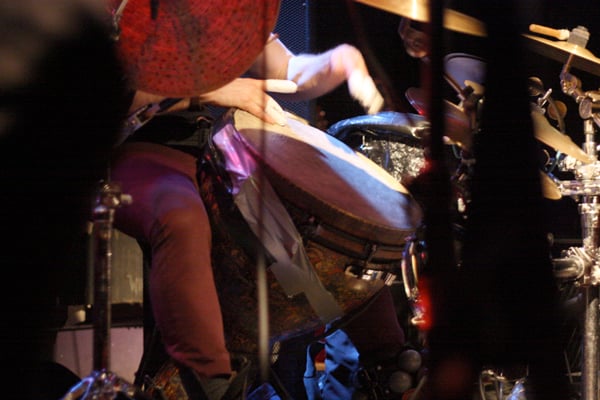 The crowd was captivated as the trio embarked on a musical journey, both brothers’ voices harmonized well together and the hand drumming added solid percussive sounds.  They mix all the right elements of pop, rock and folk, not too heavy and not too light. To keep things interesting, in the middle of the set the band got off the stage and relocated to the middle of the dance floor to play a few songs a capella.  As the disco ball came down from the ceiling, Thorald spun it around a bit as they played their tunes. The attentive and enthusiastic crowd surrounded them and the band was having a great time. During that bit they performed “Mary,” a song from their new EP, Get On It, and a song dedicated to Isaac officially becoming a US citizen. Towards the end, Isaac performed some beat boxing with a didgeridoo. After their set people were lined up inside around the merch table for a meet and greet. As the club was turning over for dance night, many of the fans waited outside in the cold for roughly 45mins for a chat and picture with the band. Pick up Get On It, released on Interscope , and look for a full-length album in 2014; they are a band to keep an eye on. The guys are known to do what they coined “musical robberies,” where they perform flash mob style performances in public places.