The past few years have been pretty big for Washington, D.C. trio RDGLDGRN (pronounced Red Gold Green.) After forming in 2011 the band quit their jobs, released a music video that reached over 100,000 hits in a matter of days, then wrote an album that had them working with the likes of Dave Grohl and Pharrell Williams and released it in 2013. They were also included on the whole 2013 Warped Tour.

Friday, January 31st  brought the band to Boston for the first night of Aer’s Word of Mouth Tour at the House of Blues. The band, led by Boston born Green, appropriately wore the colors of their name. The colorful trio along with their drummer Snaxx, held the attention of the sold out crowd mostly filled with Generation Z. Their style is self-described as indie go-go, a brand of funk that started in the ’60s in Washington D.C. – the mix of modern sounding hip-hop and rock was well received. All of their songs were upbeat and catchy and the band was into it. Highlights included “I Love Lamp,” and “Lootin’ in London,” where Green preceded it with a “Wu Tang Clan ain’t nuttin’ to fuck with” chant then replaced Wu Tang Clan with RDGLDGRN. Other notable songs in the set were “Doing the Most” and “Hey O,” which can all be found on their debut full-length.

It is entirely worth it to show up early on this tour to see these guys do their thing. Or if you can’t make this tour make sure to catch the band next time they’re around your city.

Check out more photos of the performance here and below. 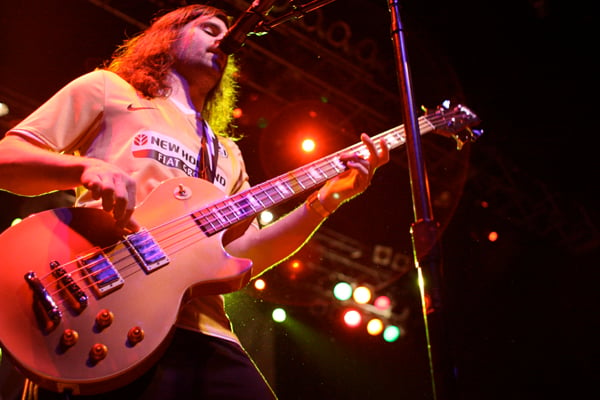