Catching Up With The Darkness Live in Boston THE DARKNESS
Where: House of Blues—Boston, MA
When: November 1, 2015 “Give me a D!” singer and lead guitarist Justin Hawkins demanded, the wildly enthusiastic crowd responding in kind. Then, “Give me an ‘arkness!”

What does that spell? A rollicking good time. A hard-rocking mix of hilarity, high-pitched vocals, and incredibly sexy riffs. A vibrant—and vital—brand of bombastic rock n’ roll pumped direct from the lads from Lowestoft, England into the hearts and guts of a nearly-sold out House of Blues crowd. It spells, in the words of Hawkins, The Motherfucking Darkness. As one of the most under-appreciated rock bands of our time, The Darkness has the unique ability to rock big, as if they’re playing a stadium or headlining a festival, while still maintaining the intimacy of a smaller room like the House of Blues. And on this, the final North American show on the “Blast of a Kind” tour for 2015, Hawkins and his guitarist brother Dan, the inimitable bassist Frankie Poullain, and hard-hitting drummer Rufus Taylor tore through an 18-song setlist peppered with old hits, comedic interludes, and tracks from their latest release, Last of Our Kind, like the veteran rock stars they are. Modern-day classics from the 2003 debut Permission to Land were represented heavily, including, of course, the main set closer of “I Believe In a Thing Called Love,” and the final encore, “Love On the Rocks with No Ice,” the latter of which saw Justin soloing wildly on his Les Paul while riding through the crowd on the shoulders of a local firefighter. 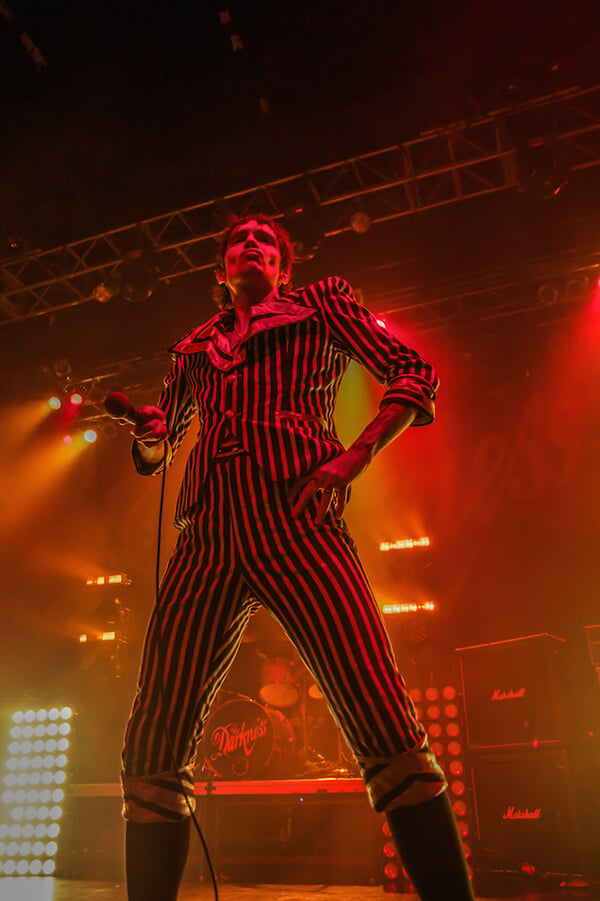 But The Darkness is far from a nostalgia act. Older tracks were given new energy, thanks in large part to the addition of Taylor (son of Queen skinsman Roger Taylor) to the fold. And new tracks, including the as-yet-unreleased “Rack of Glam,” which Hawkins introduced as “the first of many” written with the drummer, rocked as hard—and fit in as well—as anything the band has done to date.