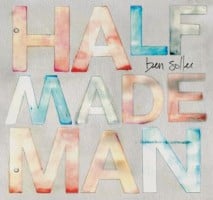 When reviewing an album there is always a tendency – as a writer – to draw comparison to some other artist’s recording. You want to paint a clear picture in the reader’s mind of what he or she can expect before buying the album. On Sollee’s fourth studio endeavor, that’s a tough task to do. Ben Sollee sounds exactly like…himself, which is to say that Sollee, in an otherwise endlessly diverse indie music-sphere, has truly pioneered his own alt-Americana style of music.

Most memorable is the heartfelt prowess of “Unfinished” and the candid assertions from “Get Off Your Knees.” The album peaks on “The Pursuit of Happiness,” a vocally arousing, storytelling, rock-n-roll rhythmic monster of a song.

Even though this album is called Half Made Man, Sollee proves yet again that his self-defined and Kentucky-bred musical mystique is wholly made.