The Whiskey Gentry on Making Music Your Day Job The Whiskey Gentry learn to let go of musical competition on their latest album, Dead Ringer.

The phone rang twice before Lauren Staley picked up. She answered with a twangy “Hey there,” and before long, I could hear the clang of pots and pans as she went about making dinner, the click-clacking of her dog’s paws on the floor, and the soft lull of whatever tunes she had playing – an orchestra of household sounds that is her daily soundtrack when she’s back in Atlanta.

“It’s good to be home,” Staley tells me.

As the frontwoman for the country/Americana sextet The Whiskey Gentry, Staley and her partner in music and life, Jason Morrow, have been leading their band around the country on tour. Most recently, they spent a few days at South By Southwest (SXSW), performing and enjoying the sights and sounds of creativity.

“It was super fun. It’s always super fun. But, also super exhausting. We joke about how it’s like cross-training for the Olympics.”

An event like that requires a lot of the participating acts, Staley says. Getting themselves, their gear, and their band to the right city on the right days is one thing, but once they get there, hauling all those things from the van, to off-stage, to the stage, back to the van each day takes a toll on their bodies. And that’s all not factoring in the actual performance. “South by is also like, hazing. ‘Come out to Texas, make no money, do all of the things,’” she jokes.

No matter how hard it seems, Staley is still able to put it all in perspective.

“It’s still a job. I mean it’s my full-time job now. And I’m super grateful that I’m able to do this as my job. I wake up, I go into my office, and I immediately start working on the band – emails, whatever has to be done comes to me. It’s the most fun job.”

She, and her band, have worked extremely hard to be able to call their passion project their career. Not too long ago, Staley was working full-time for Georgia’s Department of Labor, burning the candle at both ends, trying to make the music and her day job work.

“We’d leave on a Thursday, say at 4 o’clock,” she recalls. “Then I’d take the Friday off and go until Sunday night, when we’d get home from somewhere and then I’d wake up and have to be at work at 8 a.m. That was my life for a good two out of three years that I worked there. It’s a lot. It’s really so taxing.”

When she thinks about it now, she sounds bewildered that she was able to make that lifestyle last as long as she did. “I recognized too – because I cared so much for my boss at the time – that I wasn’t giving him 100 percent. And I think that that is really the lesson that I learned, because like I said, I am so practical and pragmatic. And there’s half of myself that’s like, “What are you doing? You’re not going to be prepared for retirement.’ I just realized, one thing’s going to suffer – you’re either not going to be giving yourself fully to your boss and that job, and you’re certainly not giving yourself fully to your passion and your creative energy and outlet.”

With the encouragement of her husband and creative partner, Staley decided to give music a full-time try. Now, she lives off the idea that ‘you get out what you put in,’ saying “you have to live it every day.” She’s committed, and it shows.

The band’s latest release, Dead Ringer (2017), is a departure from what might be familiar to fans of The Whiskey Gentry. Their previous albums, Please Make Welcome (2011) and Holly Grove (2013) sound like a young band just gearing up and testing the waters in comparison. Honestly, that very well may be the case. According to Staley, the making of and touring around Holly Grove really caused her to reflect on her life as a musician, and question whether this was right for her.

“When we got done touring for that record, I was just tired. I was like, ‘I can’t write anything. I’m over it.’ I didn’t even know if that’s really what I wanted to do,” she says. “And Jason, having him around, he found this way to motivate me. Which he has always done, ever since we met. But he was like, ‘Here’s the deal. I’m going to keep playing. So, if you think you’re gonna quit, that’s fine. That’s your decision. But I am not going to quit. And I will play with you in whatever capacity…’ He knows that I am a jealous person.” 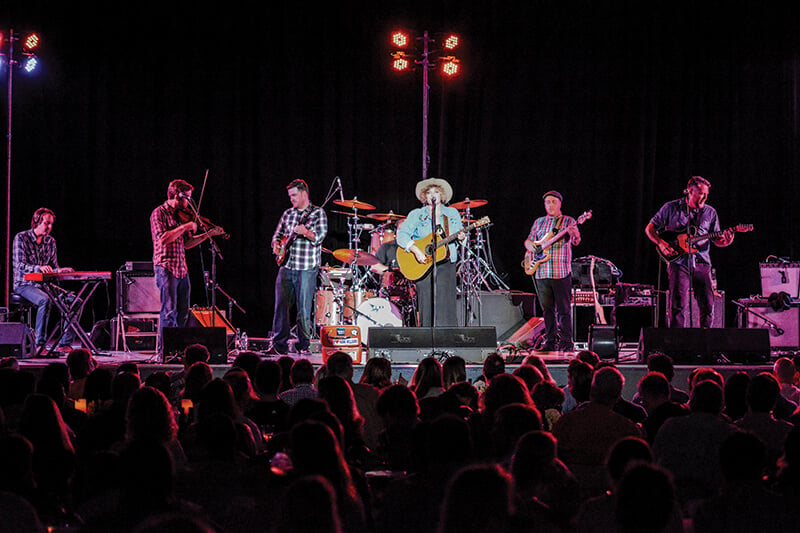 That reverse psychology maneuver ultimately worked, and Staley got back to work. With Jason’s help, and the collaboration of their band – bassist Sam Griffin, drummer Nico Lembo, fiddle player Rurik Nunan, mandolin player Michael Smith, Chesley Lowe on banjo, and keys player Les Hall – they created a record that is deeply personal, less polished, and more reflective of who they are as a group and who she is as a musician.

To make something that comprehensive and all-encompassing is no small task. But Staley says that this time, the songwriting came a little easier.

“I used to be really competitive with [Jason],” Staley admits. “So, if he wrote something good, I’d have to try and one-up him on it. For this record, it became so much more collaborative. When you kind of just surrender to it and go, ‘I need your help. I clearly cannot do this on my own anymore.’ His mark is on every single song on this new record in some capacity.”

That shift from competition to collaboration allowed the vibe of the whole writing and recording process to change. It helped Staley to come out of her shell as a songwriter and lean on others in a more meaningful way, creatively.

“[The album] feels like more of an accurate representation of who we are at this point in time,” she says.

From the lyrics on songs like the title track, “Dead Ringer,” and the recording techniques on tracks like “If You Were an Astronaut,” there’s a transparency that just wasn’t there on the previous two LPs. When asked about the album, those are the two songs Staley stops to comment on.

“‘Dead Ringer’ is the story of…me. If I had to sum up that feeling, [it’s like] I’m out there, bustin’ my ass, playing shows where people are like, ‘Do you know who you sound like? You sound just like whoever. You should go on The Voice.’ Even down to the last song on it [“If You Were an Astronaut”], that is the rawest form of any emotion that I would feel for Jason. And Jason wrote the music to that song, but the lyrics are so deeply personal about us and where we are. And there’s other parts on the record that sort of came out of my brain or Jason’s brain. But a lot of it’s autobiographical about our lives.”

You can hear that vulnerability on the record. Staley says she hears it too, and that most of that rawness came naturally. They recorded at Echo Mountain Recording in Asheville, NC, which is notorious for its big studio room known simply as “The Church.” For the first time ever, they recorded with a producer – Les Hall – who pushed them to test their creative boundaries. Staley says she won’t go back to recording alone.

“He caught our vision, but also added in so many nuggets of wisdom that we would have never thought of before,” she laughs. “Drum-fills, little parts that made us go, ‘Holy shit. That’s what people have producers for.’”

The record was tracked on 2-inch tape, which was also a new technique for the group. And finally, they let this album have a live-band feel by miking the band all together in the same room and letting the musical magic just happen.

“I don’t know. It’s just a cool thing to be – in the moment. When I listen to it, I can feel those moments. When Jason and I got our test press for our vinyl, we put it on in the living room, and we both got oddly emotional,” Staley says. “Just crying and weird. Because it just feels different…It definitely was not thought out. It definitely wasn’t anything other than an evolution of something that happened between the years.”

The creative growth of the band, and Staley’s own personal shift has allowed The Whiskey Gentry to truly come into their own on this album. It’s raw and refined without being polished. It has flaws and imperfections, but ultimately documents a moment in time that’s real and honest for the group.

In life, and music, Staley says “It’s just being a human. I’m just this human. So, [this album has] things about being a human – being hurt, or happy, or being confused, or whatever. Those are all my favorite records. They’re all the band’s favorite records. It’s why we listen to music – for that connection. It hits you and you go, ‘Oh, I’m like that too!’”