Home / New Music and Video / Interviews and Features / Typhoon: How the 11-Member Group Used its Numbers to Create Their Own Scene

Typhoon: How the 11-Member Group Used its Numbers to Create Their Own Scene

Typhoon has moved away from the vernacular music traditions of their early recordings, which had song titles like “Sea Shanty,” “Sea Shanty 2” and “Gypsy Song,” to a relatively more pop sound. My friend in Portland described the local band, who are originally from Salem, OR., as “Justin (Ringle) from Horse Feathers fronting and producing Arcade Fire,” which hits the mark pretty well.  Their breakthrough EP A New Kind Of House and full-length follow-up Hunger and Thirst show off an ability to expand an acoustic folk-pop song into music that is both cinematic and communal.

Of the things Typhoon does best, one of those has to be the way they get their 11 (current) members into a song without overwhelming the production or becoming bombastic. All of the parts are carefully arranged to complement the songs instead of egos.  The group’s main songwriter is Kyle Morton, who writes songs that are alternatingly personal then universal, sometimes in the same verse. He connects his life-threatening bout with Lyme Disease as a child to the drive we all share to live in the face of mortality.

In addition to the horns, drummers and strings, every member sings as part of a chorus that is present throughout their work. This gives their music that sense of community and shared experience, which is a large part of what makes them so interesting. It’s not a choir of trained vocalists; this chorus is inclusionary. The size of the band creates several practical issues the group has had to work out as it evolved. Performing live was much easier when they were playing house parties in their hometown. Touring, recording and playing live are now more complicated for them than for other bands of a more manageable size.

The following is a transcript of an email interview with Devin Gallagher, the band’s ukulele player/percussionist/vocalist.

How does the band work out arrangements?

There’s a lot of group jamming and dividing into sections. It’s a very democratic process: when a song is still taking shape, ideas are freely expressed by all. Songs may change many times before they are finished, and this can take months. Or years.

How does the band operate? Is it egalitarian or more like a benevolent dictatorship?

Kyle [Morton] is the songwriter, and often his vision rightly guides what we do musically. Beyond that, Typhoon is wholeheartedly a team effort. We often talk about this band as family. Each member has skills and energy to offer, but it is our strength as a group that is our greatest asset.

How do you go on the road/get around/afford it? Are there some cost-cutting ideas you guys would like to share?

We have toured for almost a decade in a fifteen-passenger 1985 Dodge Ram van. Whenever possible, we stay with friends or family or friends of friends. We’ve even asked for places to stay from the stage (this usually works but you might have to party with them). We’ve slept on floors, in the van, on the van, under the van. We stayed at an apartment once where we literally took up more floor space than was available. I’ve slept in plenty of kitchens. In the rare instances we do stay in a motel, we put four to six people to a room and often have to sneak most of our members in to [avoid] paying for twelve people. How long does a typical soundcheck take?

How is recording done? Live? Overdubs? Basic tracks then overdubs?

We usually record one at a time. Sometimes the drummers record together, sometimes the guitars. Group vocals are always recorded en masse. Paul Laxer engineers and produces everything we do, so each one of us spends a lot of time with him developing our contribution to each song. The songs for White Lighter had hundreds of tracks by the time they were done.

Do you still play any house parties? Do you get paid for these (i.e. passing a hat)?

Typhoon’s last house show was a couple years ago, though most members play music solo or with other groups, so it’s not uncommon for one of us to be seen rocking out in a living room.

House shows in Portland are almost always free and pro bono, the exception being for touring bands, who everyone understands need to make some cash.

How do you tour east of the Rockies and west of Chicago, that kind of no-man’s-land of the USA?

There’s a lot of driving there. Though we’ve had great shows in Montana, Wyoming, New Mexico, Texas…

Many of your songs are written in first person but end up developing into communal sing-alongs. How do you feel this affects the way your songs are experienced by the listener?

Singing someone else’s words can be strange. Fortunately, pretty much everything Kyle has asked me to sing is something I believe in. I think the group singing has a huge effect. No amount of overdubbing or reverb-ing can compete with the power of eleven people singing together. Furthermore, there’s a lot that happens on a neurological level when people sing together. It’s not dissimilar from having sex, in terms of what happens in your brain. Singing together makes us stronger. 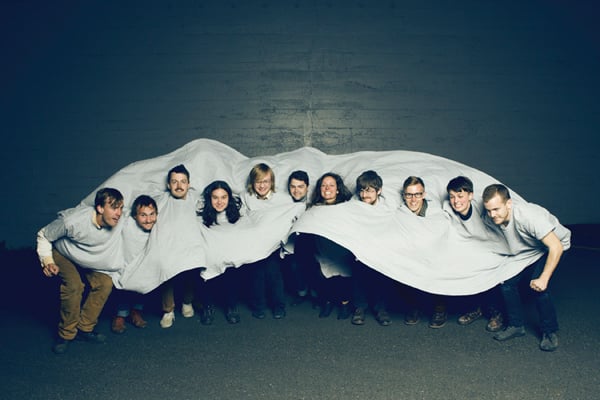 Was it hard for you to get established in a crowded music scene like Portland’s?

Yes and no. A few of us had already learned through experience with [other bands] that the scene was saturated and hard to penetrate. A few of us realized this and decided to start our own scene instead. We started a little record label to put out our album and booked our own shows and tours and encouraged our friends to start bands and release music; some of these pals now play in Wild Ones. I was amazed at how fast Portland took note of what we were all doing.