Catching up with The Suffers at Forecastle Festival It was hot. Very hot, but the funky thud of each bass string kept my hair from sticking to my neck. I couldn’t not move.  And then that pop. Oh those pops! Firing off one after another, picking up where the last smack of the drum stick left off. Each musical layer revealed itself, adding a unique hint of flavor to an already boiling pot. And then, just like that, BOOM! My senses had been mercilessly exposed to the robust sound, home to The Suffers.

So how does a band this immense in sound and charisma get started? Just like a lot of you.

“I don’t know if there was a specific moment but I started playing or I guess got the bug around 11 or 12. And my dad played guitar. There’s definitely a lot of music in my family,” said drummer, Nick Zamora.

“I wanted to play an instrument and I remember seeing the video for “Smells Like Teen Spirit,” he said. “I was a little kid but I remember watching it and thinking this is next level! I definitely want to be doing this,” he continued.

Hailing from Houston, TX, the Suffers helped launch a stellar final day for Forecastle Music, Art and Activism festival this July. As mentioned early in their set, vocalist, Kam Franklin, declared their music as, “gulf coast soul.” It’s easy to assume the 10-piece band’s greatest asset is their culturally-diverse collection of musicians, but it’s not. It’s actually much more than that. The Suffers’ ability to blend each contrasting sound and culture into something so different, so beyond wonderful that they had to create a new genre is what sets this group a head above the rest.

Bass player Adam Castaneda discovered his niche for bass after his hopes of playing another instrument were quickly turned down in school.

“Then they told me they didn’t have a bass for me to play so I said alright, I guess that’s that,” he said.

With a smirk on his face, Castaneda continued, “So I had the friends that were punks and they said they’d let me have their bass and start a band.”

Much of the band’s success comes from their honest persistency. The band has been together for over 5 years but hasn’t seemed to fall out of touch with who they are or where they come from. The same is to be said for the Castaneda. He’s a great example for new-comer musicians because he’s remained unwavering and humble throughout his career. 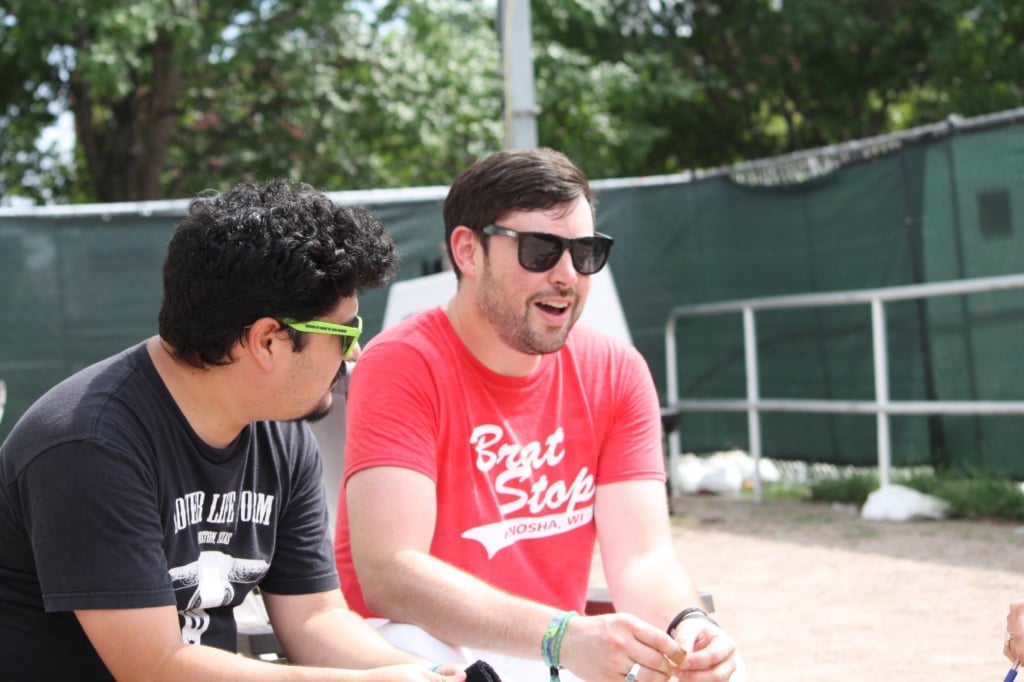 The Suffers at Forecastle Festival

“My parents listened to a lot of old seventies stuff like Queen and Pink Floyd and stuff like that. And I appreciate it now that I’m older but like back then, [I thought] I could never play a Brian May lead solo. That’s not gonna happen, ” he said.

The bass and drums keep this band’s rich aura in perfect rhythm. For a group of musicians with such strong undertones of classic funk and Cajun soul, Castaneda and Zamora’s musical roles contributes to the heartbeat of the band

Eventually, he contributes one of his earliest memories and greatest musical inspiration to a late-eighties punk band.

“But the with punk rock, I guess Operation Ivy’s first record first record was the first one where I turned it over on the back and it looked like me and friends. And the album sounded terrible! It was like I can do this!,” said Castaneda.

While we all don’t create music like The Suffers, or share in the same inspiration for our goals, we can all relate to this band’s willingness to stay true to their desire to break genres and remain hopeful as choosing the path less traveled.

“Yeah! I can do this,” Castaneda beamed as if he just had this realization for the first time and wasn’t recounting a happy memory. “This is something I can relate to and I can do that. That inclusiveness of you don’t have to look pretty, you’ve just got to want it. Ya know? That was like, this is me.”

What do you think of this feature on The Suffers? Let us know in the comments below or drop a line on the Performer Magazine Facebook page or on Twitter @Performermag. And be sure to check out all of our Forecastle Coverage on Instagram.