When Juliana Hatfield was younger, she took private tennis lessons. She remembers vividly the day her instructor asked her to try a different grip on her racket. “He said, ‘Turn your serving hand a little to the left and keep it there,’” she recounts. “It felt so uncomfortable for so long, and then at some point it kicked in and I realized: my serve was better. But it took someone else to show me that I could actually change, that I could move in a different direction and it could improve me.”

This anecdote that Hatfield floats by in passing seems as apt an analogy as one is likely to land on to characterize her diverse, mutating presence in the music industry. In addition to a solo career during which she has released more than ten records, she’s also been a contributing member of bands like Blake Babies, The Lemonheads, Some Girls, and, most recently, Minor Alps, a collaboration with Matthew Caws, lead singer of Nada Surf. But it’s Become What You Are, the Scott Litt-produced 1993 project released as the Juliana Hatfield Three – with Todd Philips on drums and Dean Fisher on bass – that truly landed Hatfield in the public consciousness, with songs like “Spin the Bottle” and “My Sister” receiving regular radio airplay and becoming MTV staples. [“My Sister” remains Hatfield’s biggest hit, a song storied enough to receive its own oral tradition in a recent SPIN feature.]

The trio never released another record, and showed no signs of doing so, so it came as something of a surprise, in 2014, when plans for a reunion tour and a new record, Whatever, My Love, were announced through Hatfield’s website. “I tend to get bored and restless if I’m on my own,” Hatfield says. “There’s a danger of repeating myself and repeating the same habits in terms of recording techniques, playing, and writing. It becomes too comfortable.” She can’t quite remember whose idea the reunion was, only that it came about quickly. “I knew the songs were good, but I didn’t know if we would have any musical chemistry still. I just booked the studio and said, ‘We’re gonna go in there and do it, and if it’s a total disaster we can still pat ourselves on the back for giving it a try.’”

A total disaster it is not. Whatever, My Love finds the trio evolved in many ways – it being twenty-three years since Become What You Are was released in a musical climate wholly unrecognizable from today’s – and yet the sound and the songs are unmistakably theirs: incisive, gritty, melodious, vulnerable. Hatfield’s voice is as distinctive as it ever was, her songwriting as surprising and smart. The songs themselves are served tremendously by the bold and arresting backgrounds Phillips and Fisher create for them, strung together with contagious melody. “Push Pin,” the album’s most infectious song, was written by Hatfield for a possible Lemonheads reunion album a few years prior, to be produced by Ryan Adams (a project that never came to fruition). The song ended up appearing on Hatfield’s acoustic Wild Animals, but is reinvigorated here by the trio, who elevate the track to the upper echelon of Hatfield’s catalog. “I hear your voice and I’m a born-again whore,” Hatfield sings, and it’s difficult not to join her. Never has pop-punk been more exciting, imbued and stylized with the rigor and rancor for which Hatfield is known and loved. 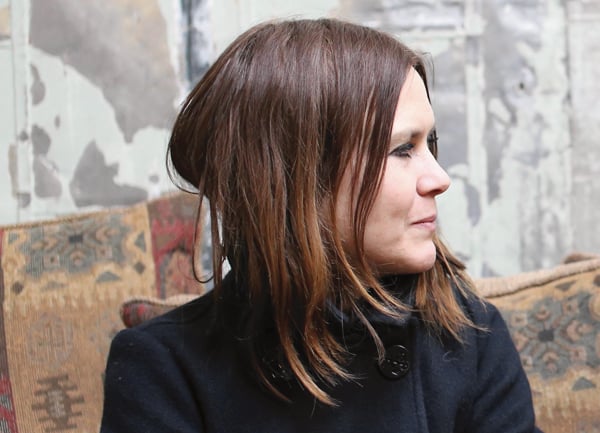 Beginning this month, the trio will play the entirety of Become What You Are, in addition to songs from the newest record, in venues throughout the country. This at a time during which so many venerated bands – like The Breeders, Veruca Salt, and Sleater-Kinney, to name a few – have reemerged on the scene. This prevalence of nostalgia-fueled reunions seems to signify a renewed interest among contemporary audiences in the left-of-center, alternative sound that came to characterize much of the music from the ’90s, but Hatfield can’t place her finger on why. “I’m still trying to figure it out,” she says. “I’m just now starting to think about what it means, what we did back then. We’re finally able to look back with distance. I was too close to it before. And up until recently, I said I’d never do one of those play-the-whole-album tours. I wasn’t into nostalgia. But then at some point in the last year, I realized [Become What You Are] actually holds up. It doesn’t sound retro to me. And I think we could actually have fun playing it.”

She continues: “I know for other people it’s a nostalgic thing, but for me the ’90s doesn’t stand for much. It just happens to be when I started to make this music people were starting to hear.” Hatfield has seen the times and the industry change drastically; many of her more recent albums – including Whatever, My Love – have been made possible only by way of crowdfunding, which didn’t exist when she first came on the scene. “You have to be more down-to-earth about everything when you’re in the position of being crowdfunded,” Hatfield says. “You have to watch the numbers. You’re in charge of the budgets, which we never used to be. So, in a way, that’s kind of a drag, because I’m not accountant, but at the same time I’m not wasting money like I’m sure the record companies did. We can be more realistic about it and use money where it needs to be spent. Crowdfunding really saved my ass.”

Pledgers and non-pledgers alike will have the chance to see and hear the product of their investment on the trio’s upcoming tour, which will make stops in cities like Cambridge, Seattle, San Francisco, and Los Angeles. After the tour is over, Hatfield says she’ll continue writing and recording, despite describing the whole process as challenging. “People who say ‘I love writing, I just love it’—they’re not real writers.” She relays an adage from the great Dorothy Parker: “I hate writing, I love having written.”

“If you’re a real writer,” Hatfield argues, “it’s torture.” And yet one need only listen to Whatever, My Love to see how productive and generative that torture is for Hatfield, who consistently surprises, haunts, and delights, reinforcing over and over and over again, in any number of variations, the vitality she’s been demonstrating for more than a quarter of a century.