For OFF!’s Keith Morris, DIY is a way of life. His credits include Black Flag and Circle Jerks, bands whose signature sounds were built on Morris’ powerful vocals and legendary stage presence. Although decades have passed since Morris helped found these projects, their relevance has hardly diminished. The DIY ethos that these groups embodied continues to inspire countless musicians, and music fans, as evidenced by the fact that last year, not one, but two rival groups of Black Flag members were packing venues around the nation.

With his newest project OFF!, Morris is using DIY methods to create hardcore music for a new century. OFF! is a bona fide supergroup consisting of Morris, Dimitri Coats (Burning Brides), Steven Shane McDonald (Redd Kross) and Mario Rubalcaba (Rocket From The Crypt). These seasoned veterans are creating some of the most vicious new music around, and after returning from a South American tour, Morris and Coats wrote the band’s latest release, Wasted Years, in just two weeks. They took the music straight to their practice space and recorded the album live, to eight-track tape, capturing the music in single, uncut takes.

From his home in Los Angeles, Morris shared tips for analog practice studio recordings and talked about writing an album in such a short timeframe.

Why did you choose to record Wasted Years in your practice space instead of a professional studio?

So we recorded in this church, and I believe it took more time to unload our equipment, place it in the studio, and put it back in the van than it took to do the actual session. But the recording was so great! That’s the way that rock and roll should be recorded: you just set up, you place the mics in front of the equipment, and you go. You don’t take two weeks to get a kick drum sound. You don’t do the Metallica thing. You don’t do the Beatles thing where you live in the studio. You just set up, turn the volume up, look at each other, and then you go.

That recording for us was so fresh, it was almost effortless. So, for Wasted Years we thought, “Lets strip it down.” Basically, we wanted to record a glorified demo. 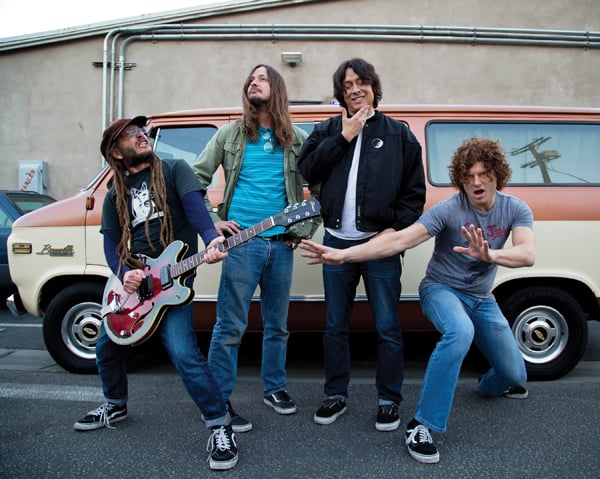 You recorded the whole album on an eight-track tape machine. Most bands these days will use eight tracks or more just on the drums! How did you use your eight tracks?

I believe we had four tracks for the drums. In a small room you get a lot of bleed from guitar and bass. We were really fortunate that the mics that we were using didn’t pick up a lot of that stuff.

Tracks five and six were for guitar and bass. I would do a vocal run and then there was one track left over that was going to be used for a second guitar. When you’re recording like that, it’s very important to keep notes.

What kind of notes were you keeping?

The notes about the vocal tracks were the most important. After the first six instrument tracks were recorded, there were two tracks remaining: seven and eight. Track seven was set aside for vocals. The majority of the vocals were taken straight from track number seven, but occasionally I would do an overdub on track eight. Then the second guitar would have to be recorded on track seven. So, the second guitar would switch back and forth between tracks seven and eight. That’s why taking notes was so important: so we wouldn’t record over the vocal track we wanted to keep.

Some of it was “learn as you go.” We had some stuff erased, which was frustrating, but it was all part of the learning process. Now we know what we’re going to do the next time we use Whiskey Kitchen Studio. That’s what Steven McDonald calls the studio: Whiskey Kitchen.

What was it like writing this album with Dimitri Coats?

So we got back two weeks before we were supposed to record and I had developed a lung infection on the tour so I was running a fever and couldn’t sleep. I was getting more and more run down. We always place ourselves in the situation where we have two weeks to write 20 songs. We always wait until the last minute.

What advice do you have for young hardcore musicians?

I believe that it’s about the spirit and the soul of the music. There’s a lot of plastic, phony stuff out there. The best advice that I can give would be don’t do it. Just kidding.