I had the good fortune to sit down a couple of weeks ago and have a lengthy discussion with Steve Voss from Tetherball to get inside the mind of musical genius, and to find out how he puts his own unique creative stamp on his recordings and live performances.  While the 1963 Gibson amp with its 10-inch speaker was very helpful in creating most of the driving riffs behind his poppy intellectual tracks, there are many other factors that contribute to his band’s unique branding.  Following is a condensed version of our transcript; any one of the nuggets from these paragraphs when properly implemented at your studio may be just what the proverbial doctor ordered to elevate your current project to the next level:

Did you used to sing backups with your last project, The Rogue?

Yeah, and I never focused on my vocal tone. Listening back to a lot of stuff it’s like, ‘Oh God, what happened?’ That was [me] just trying to blend so much with Josh Vaught…I tried a little bit, but when you’re not singing and you’re not ‘THE VOICE’ then you’re just like, ‘Well, I’ll hit the note and that’s it,’ that’s all you have to do!

But then when it’s you – you’re the singing front man and it’s a whole different thing. Now I totally understand all these complaints from singers with trying to get people to sing backup with me. It’s like, ‘Yeah, but you know. Make it softer and try to do this.’ and I was just yelling at myself from years ago ‘cause that was exactly [how I was]. Now I understand! 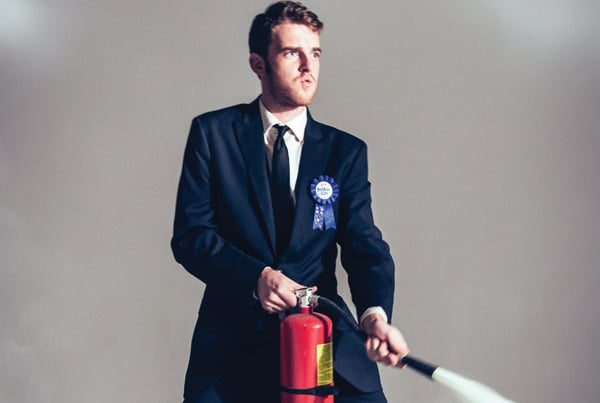 Everything makes perfect sense now!  Did you do all the harmonies yourself on the album?

Probably a little over half, but I really wanted to have collaborators, I really wanted to get a lot of friends [on these tracks].  So on the CD I credit all of them for the different background vocal parts.  But I love harmonies and layering stuff, so I would call a friend like in Puzzles, my friend Rachel, who has a great voice and who I knew could sing the parts I wanted – that’s why I just had her come in and sing it.  I think there’s like 13 total voices on the album but [most] of the harmonies are mine.

What was the tipping point for you where said, ‘Yeah man, I’m the singer now’?  The point where you said, ‘I’ve got this shit’?

It was a slow process to figure out.  I had all these songs that I had written and I said, ‘Let’s start with the easy ones first.’  So I started with the lower register, quieter stuff because that’s what I was kind of comfy – because I can be kind of submissive and less ‘out there.’  The louder stuff like “Absinthe” and “Vegetarian” I saved for last because of higher register and I just hated how my voice sounded.

But I just kept working through different things. I sat down a couple times with…a vocal coach, got some tips, and just worked through a lot of it.  But I think the first time I realized, ‘I think I could do this,’ was in the beginning of the year. And then slowly I just built from there and figured out that I can do it.  I still don’t feel like a singer, I just feel like…

It’s crazy because you say you don’t feel like a singer but until we had this discussion I never would have known. You tricked me, man! I mean, you tricked a lot of people (and I mean that tongue in cheek).

Have you performed a lot of the stuff on the album live successfully?  Could you sing and play everything that you’ve written on stage?

Yeah, and that’s kind of a downfall of mine. I really enjoy it – challenging myself and then seeing if I can do it. It’s kind of like a brotherly quarrel. ‘I bet you can’t do this.’ And I’m like, ‘Oh yeah…Watch!’

I have this internal monologue – you know, it’s always in the back of my mind. I guess it’s like, ‘Hey, I bet you can’t record and finish a whole album and produce it by yourself.’  And again, I’m like, ‘Oh yeah, watch!!!!’

It’s same thing with learning how to shoot video and make music videos for all the songs – well, two songs so far anyway.  So that’s fun, challenging myself.  Then at the end of the day I have a couple of videos where I did everything from recording, the mixing, production, the writing, all the playing, and thinking of the ideas, getting the shots, coloring it, editing all the video…And now this project is so ‘me’ that it’s really fun to watch and see the [results of my] creative outlet.

Do you feel like it’s no longer enough that you can pick up the guitar and write a riff, if you’re going to be successful in the business you have to edit a video, know a thing or two about mixing and recording?

I think so…If I’m working on a video then I learn a lot of stuff that I can use for Tetherball or vice versa – something that I’m doing for myself, a trick or a new sound that I can find or then I can use when producing somebody else’s album.  That’s really fun, I love doing that.

If you’re hands on about everything, which I’m a super fan of, then it will speak the most about your character to the public and to yourself.  I’ve learned so much about myself and my case and what I think about stuff just by…creating it all. Once you realize there’s no limit to what you can do, what will you do to challenge yourself?

But yeah, in the future I don’t know, I just love the whole process of what I just went through this year.  Doing it all again sounds like a blast, but challenging myself to make it better and then exploring more [will be rewarding, too].

We could have talked all night Steve and I, but I let him get back to his trade. Just when I thought I had seen and heard all of what Steve and his genius was about, he sent me links to videos of him performing his songs from Whimsy featuring the Hot Club Time Machine (http://youtu.be/gds9gAKXeFc), which further reinforced my respect for his craftsmanship and creative stamp.

My favorite song on Tetherball’s Whimsy you ask?  Without hesitation, “Hometown,” which brought me right back to one of my favorite acts, Fountains of Wayne, very reminiscent of their song “Prom Theme.”  Grab the new album out now by Tetherball, and be prepared for the genius of Steve Voss, you will not be disappointed!