“I don’t read or write music.  So when I write songs, I’m ‘woahing’ them out in my head during the day at work.  I scrawl them down during lunch sometimes.  So the melody part, it’s always just like ‘woah’ until I figure it out.” This is how Adam Kaz, who provides lead vocals and banjo-ukulele instrumentation to Tigerman WOAH!, describes both his songwriting process and the inspiration for the band’s exclamatory surname [editor’s note: with or without the exclamation point, it’s all good].  Along with guitarist Jon Feinberg, the two formed the band in Lynn, Massachusetts, reunited as adults after meeting in high school in Atlanta.

The two would both find themselves in the Boston area years later for different reasons.  Neither had many connections in the city, and they “just started playing together, drinking and talking about politics and stuff,” Kaz says.  “It was our hobby for a year or two until we met a couple of people who helped us make a band.”  Feinberg echoes the band’s genesis, noting that the two went to “two open mics in that two-year period.  And it was awful, and we were both really uncomfortable.”  But the two met the band’s original drummer, Jon Morse, at one of those open mics.  Morse eventually left the band, but not before he introduced them to Kevin Landry, who plays upright bass and Adam Lentine, the group’s current drummer.

Kaz says he plays the banjo-ukulele instead of the banjo because “the banjo‘s hard.  And I’m dumb.”  But he has customized his uke to add an SM57 microphone attached with Velcro to the back “which is cool because then I can sing into what (on another instrument) would be a pick up.”  Feinberg has been playing the same Gibson SG since he was 13 years old. According to Feinberg, the group is “rock and roll with a taste of punk,” but they display a variety of influences, including blues, hip-hop and Appalachian folk music.  “It’s all just mashing together the entire history of American music into something you can play,” says Feinberg.

History has had a great impact on their music, starting with the Civil War.  Kaz says that “the South has an extremely important history and a huge impact on this country that people don’t talk about a lot.  And that’s that there was a war over slavery – a war in this country – and this has a huge way of how we look at this country.”  This has influenced a variety of music, he says, from rock and roll to blues, and “it’s all connected to a very similar source.”  Feinberg agrees, noting that “rock and roll in particular is made up of this history of American music, a lot of it based in struggle, a lot of it based in hardship.”

The band writes a lot of songs about struggle and hardship, as Feinberg states that their music is “really about fighting against the capitalist class that controls so much of everything that happens in this world, be it as a cultural enterprise or business enterprise.”  Continuing, he says “at a very basic level, we think that music is inherently human, it’s something that we all share, and it should be something that has no barriers of entry and nothing to keep you from doing it or participating in it.”

The barriers as Feinberg describes them are due largely to the current mainstream recording structure.  “Part of the problem is that music is seen as a commodity.  And that means that there’s money being put into it, and money that’s coming out of it.  And that’s not being distributed very equitably.  When you look at the record company system, you have a very few people at the very top making a ton of money while some of the artists struggle.” The men from Tigerman WOAH! understand the artist’s struggle, as Feinberg says, “None of us can afford to [quit our day jobs].  It’s very far from possible right now.  It’s a dream.  I don’t think any of us have a delusion that that’s something that’s going to happen in the immediate future.  If it’s something that does happen, that’s luck, and that’s a beautiful thing, and we gotta jump on it.”

Despite the relative lack of remuneration, the band enjoys making music and sharing it with people through their own unique ways.  They have released two EPs – Up South Vol. I and Up South Vol. II, the first recorded in a friend’s spare bedroom converted to a studio, and the second recorded when he “upgraded to a shed in a new house he moved into.”  The third and final installment in the Up South series will hopefully be released next year, according to Feinberg, and then they plan on recording a full-length album. The group also hopes to eventually do a vinyl pressing for their work.  “I think vinyl has a lot more to offer than a CD does, or going and downloading it online,” Feinberg says.

Feinberg goes on to say that part of the band’s popularity has been due to the fact that they did not start off playing gigs in bigger cities.  “We live in Lynn, so if we just started off playing in Boston, there’s so much musical competition that it would have been significantly harder to get noticed.”  But they did eventually get noticed and from word of mouth, their fan base has grown.  Feinberg also credits the Internet with the band’s dissemination of music.  “You can look for things that are recorded halfway around the world – the whole way around the world – without having to go there, without having to ship things from there.” 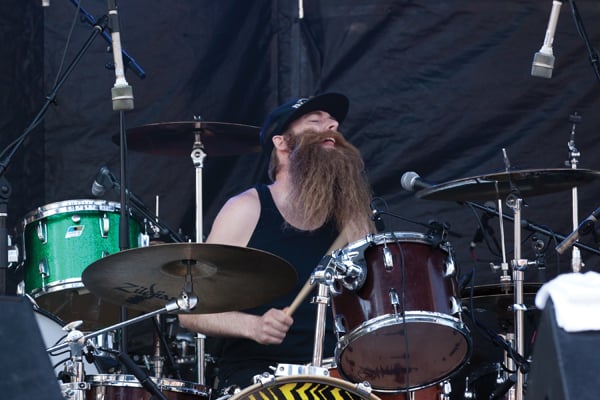 The group will continue their grassroots efforts to grow a fan base and expand their touring.  But regardless of their monetary success, the band enjoys engaging in their passion and sharing it with others.  In the end, Feinberg says, “If you really want to [make music], you can find a way to do it.  But that doesn’t mean you’re going to quit your day job to do it.”