Fresh from his honeymoon in Fiji, Kyle Andrews sat down with Performer and answered a few questions about his style, his motivations, and his historic band idols.

It all began with an old acoustic guitar with a hole in the side and a Band-Aid to patch it up, but over the years, he moved to Nashville, gained a record deal and established his name. Throughout these changes, Andrews managed to keep his light, fun and friendly vibes. After hearing one of his albums, you may begin to question what his motto is, but he simply wants to tell people what he wants to hear himself.

You may find his music described as “bringing Sun to the people.” This is probably closest to the truth, because he emphasizes a little more than just a silver lining. From his bedroom, to Nashville, to tours around the country, he’s spreading the good vibes and he’s put out an album just in time for the summer. His newest record,  Brighter Than the Sun, tastefully describes what he wants to deliver to his listeners, and he achieves it completely.

When did you start making music and what made you decide to make it a career?

It started in 6th or 7th grade when I became interested in playing guitar. It caught me right at the beginning of ’90s grunge, Nirvana and Pearl Jam and those sorts of bands. That’s when I started paying attention to bands, really. So the big thing then was to save up for a four-track cassette recorder. I didn’t know what it was but I had an inkling that I needed it to get started. As soon as I got one, I started recording and laying down guitar parts.  That was all through high school, from four-track to a computer, and now that’s all I’ve done for the past 20 years.

From there, everything just steadily progressed. I moved to Nashville about 10 years ago; I had a friend playing in a band at the time so I came out here to see him and what he was up to. It was cool to be among people who were passionate about the music scene like I was. From there, it’s just become all I do. If I wasn’t doing this for work, it’d be my main passion. I highly recommended making your hobbies your jobs. [laughs]

Tell me a bit about your approach to writing.

In general, I start to record and make music first. Whether that’s laying down drums or keyboards, I just try to find some sound that is inspiring. The tone of it hopefully inspires some lyrics or direction. After that, it becomes kind of intuitive. Occasionally it’s the other way around, you have an idea then add sounds. But for me, music is easiest. The newest record sort of worked that way and the main challenge was to add lyrics.

How do you feel like your music has evolved? Do you think it’s related to you changing, or are you influenced by the music world?

I think there are two sides: the music and projection side of that is really the story of me evolving as a musician and a producer. The other side is the recording side, and the varying techniques I use or am beginning to use. It is very much the personal side of growing up. For example, I moved to Nashville when I was 19, which was young. So my original stuff seemed to be much younger, and it changes as I grow. But honestly, I still write in a very idealized way. Even though it’s personal and honest, I still try to project my best-case scenario on things; all the lyrics are things that I want to hear people say. In real life, you won’t necessarily walk outside and have a purple sky and rainbows everywhere, but in my music, I ask myself, why not? That’s my perspective on life and how I want to be. 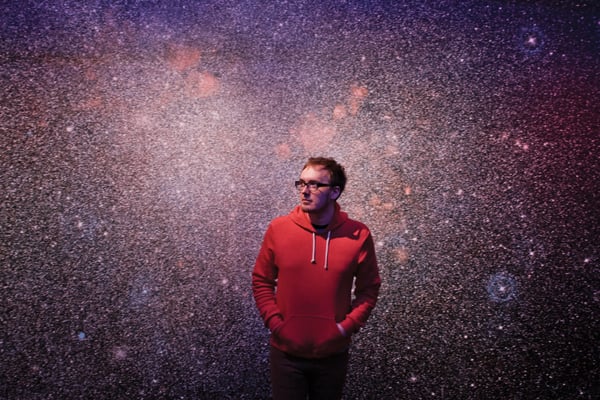 As you underwent these changes, do you think your fans have evolved with you?

It’s interesting to see who responds to what. There are certain songs that are sort of classic acoustic, almost like Elliott Smith things and there are people who respond to those songs, but there are also people who respond to the sunnier side of things. I don’t think I have a sense of who’s following from beginning to end. I just trust that if you like one thing I’m doing, then you’ll like other stuff because there’s sort of a thread.

Primarily, I’ve recorded at home in my bedroom. I’ve always used Pro Tools; I use a lot of different software. Pretty much anything to get keyboard and drum sounds. Those are the main kinds of gear I would say I use the most.

My parents still have the first acoustic guitar I ever had, and it has a big hole on the side with a Band-Aid over it. In high school we had a band sleepover where we were recording and I woke up and there was a hole in the side. I don’t know what happened, I just woke up and it was there. But my favorite instrument is my computer because it gives me access to everything. I would say I’m more of a producer than a musician; the part I take pride in is putting it all together.

How much of your sound are you playing vs. producing?

I play all of it, but if it was just running live on tape, it’d be pretty different, so I’d say its 50/50. I think about it in terms of if I made a movie, there are different producers who make documentaries. I’m more interested in [being] like J. J. Abrams, where I want to put the world into something cool – not necessarily what it is. It’s like the Beatles making music in the studio.

If you could collaborate with any artist, who would it be and what song?

We have these artists who have made these amazing records but maybe later in their career aren’t doing the same thing. I wish I could have worked on every David Bowie record in the last 15 years and made it the way I wish it was. It’d be fun – I love his voice, it’s so versatile, and it sounds like five different people in one song.

What’s one piece of advice you’d want to tell our readers?

For me, it’s taken a lot of dedication. You have to love what you’re working on so much that even if nothing happens with it and you don’t get paid and even if someone boos you offstage, you love it so much that you’re still going to do it. For all I know that may happen the next time I try something. You just don’t know, so it takes dedication. And you can’t give up. It’s something you want to put time into because you can.

photos by Amanda Rogers & Will Holland