Kendl Winter can exist in many worlds at once. In the last decade, the Olympia-based banjoist has served as one of the main songwriters behind the celebrated bluegrass outfit The Blackberry Bushes String Band, the chaotic folk punk band The Pasties, and the alt-country band Southern Skies. Along the way, she’s wailed in party punk bands, MC’d in humorous hip-hop groups, and played second guitar in a surf band. While recording her latest solo album, she was training for an ultra-marathon.

When we talked, she was on her way to South by Southwest (SXSW) and serving as the nightly entertainment for a pants company’s traveling road show. “Britches, Booze, and Banjos,” is the slogan of Tour de Pants, a road show put together by Red Ants Pants, a Montana-based company that makes work pants for women. Touring around the U.S. in an Airstream trailer, Tour de Pants’ shows take place mostly in living rooms full of women with outdoor and manual labor jobs. The tour is, “like out of a Tom Robbins novel,” Winter says. Though she’s not new to life on the road, being on the road as a solo musician is new and a bit of a fresh start for Winter, after years of playing in bands. 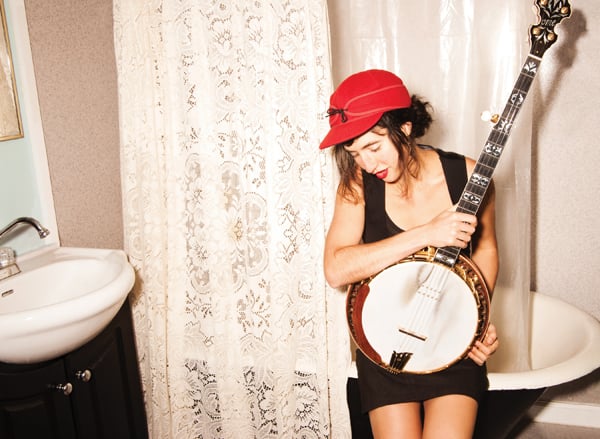 This past fall, after eight years of playing and touring with The Blackberry Bushes, she left the group to put more energy into her solo music. While she’s never stopped recording solo music, she’s never focused on it until now. Her upcoming K Records release, It Can Be Done!, is the result of that focus. “It was really deliberate. It was the first time I’ve got to work on a solo album as my primary project,” Winter says. It Can Be Done! is her third outing on the legendary indie label, which is most well-known for spawning a very particular brand of lo-fi indie rock in the 1980s and ’90s. Winter’s new album, a more fleshed-out and higher-energy affair than her previous two K releases, works as an interesting crossover piece between two worlds that rarely interact – namely, indie rock and bluegrass. This is what makes her music so unique and also what makes her an oddball in both indie rock and bluegrass circles.

At SXSW, she says she probably stands out not for her music, but as “the dirty girl over there.” At SXSW, “Everyone just looks really good,” Winter says, “and sounds really good and everyone is really polished in a way that I, um… well, I don’t pretend to be polished.” And perhaps it’s, in part, that lack of sheen that makes her music a natural part of the K Records family. While there aren’t many albums in their catalog that have bluegrass or country leanings, the majority of their releases value the heartfelt and powerful over the produced and polished.

In a catalog that has included a huge range of music – from Beat Happening and Mirah to Modest Mouse and Beck, punk and folk to funk and hip-hop – Kendl Winter’s love for creating music of all genres also makes her right at home at K. The label, famed for their unique DIY attitude, set almost no restrictions on the kind of album Winter could make and didn’t try to pigeonhole her or make her country into kitsch. “They’re really open to just really helping me seek out what I’m looking for,” Winter says. In 2009, The Blackberry Bushes took second place at the world famous Telluride Bluegrass Festival and for years the band has been a staple of the bluegrass festival circuit. Now that Winter’s on her own, though, and stretching the bounds of the genre, she’s finding some of those doors closed to her. “I definitely have been told that I can’t really play at some of the festivals I used to play at [with The Blackberry Bushes]. It’s not bluegrass enough,” Winter says. She takes this in stride, though, quickly adding, “Which is okay, you know, people have their likings. And there are people who are just trying to hold true to a tradition and I think that’s also very valuable and important.”

For anyone else, this split between worlds might be seen as a hurdle, but for a perpetual optimist like Winter it is a way of building musical bridges. “I see it as a way of connecting with a lot of different generations…having something familiar to share and then just kinda branching from that.” And despite the fact that her current music might not be welcome at all the bluegrass festivals, she’s not planning on losing her connection with bluegrass and old time music communities. “I’d like to keep my chops up for that because I think it’s so great to show up in the middle of a bunch of strangers and be able to play the same song. That’s amazing,” Winter says. Immediately adding, “But it is really fun to be able to be like, ‘I feel weird, I’m just going to go into a rap.’ Or, ‘I’m just gonna play this melodic line I found that really makes me think of this’… It isn’t necessarily bluegrass.” 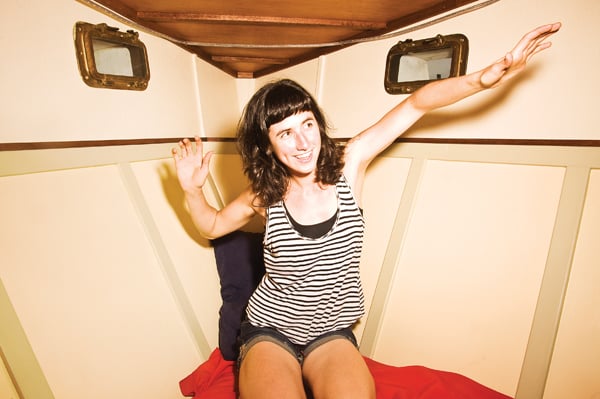 While playing solo isn’t completely comfortable for her yet, she’s getting more used to it. “It’s very vulnerable, and I feel very exposed, and my mistakes are a lot more obvious. But I also feel like I can kinda also control the energy in a way that I like and be flexible in a way I like,” Winter says. She has no shortage of opportunities to get more comfortable with it, with weekly solo shows around the Pacific Northwest in the coming months, a small tour of the Midwest, plus a handful of shows with her backing band, The Summer Gold. The summer months are going to find her traveling around to a number of festivals, ones that don’t mind her taking bluegrass to new places.

In August, she’ll be celebrating the release of It Can Be Done!, with release parties and tours to follow. Along the way, she’s planning on creating a potentially unlimited variety of creations as part of her Pantyhose Popscreen project. The name, taken from the common DIY home recording technique of using a pair of pantyhose as a pop screen on a microphone, basically serves as a catchall name for all things Kendl Winter. So far the name is mainly being used for her YouTube video series, but in the future will be used for 4-track home recordings, artwork, writings, ’zines, and anything else that becomes an outlet for her unstoppable creative energy. While she’s been touring for a decade and has participated in the recording of over 15 albums with a variety of groups, it’s clear that Kendl Winter is only just beginning.