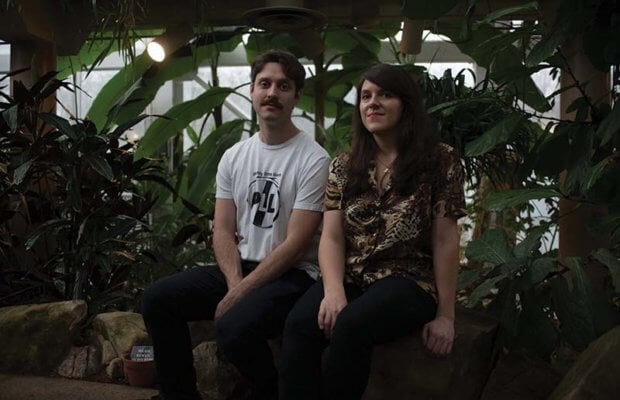 With a long road ahead and a decade-long one behind, Georgia-based duo Eureka California released their fourth album, Roadrunners, this May. Now available both digitally and pressed on vinyl, Roadrunners is the latest checkpoint on Jake Ward and Marie Uhler’s voyage through hardship, friendship, and creating music that is molded not into poetry, nor rock and roll, nor punk, but instead, the form of whatever shape fits best at the moment the song is written.

Ward’s rough, energetic, and short-breathed vocals on tracks like “Gila Monster” or “Time After Time After Time After Time,” mixed with a fast stop-and-go tempo, will more likely than not remind listeners of the ’80s folk/punk scene. In fact, if one were to listen to “Telephone Tone” after a Violent Femmes album, the resemblance might appear uncanny. Despite this, Ward cannot pinpoint a direct influence or direction in Eureka California’s unique style. The way they play now, Ward says, evolved naturally.

“I don’t know if there’s any direct influence. We both listen to a lot of different kinds of music, and the music on Roadrunners just seems to have come about organically over the course of the records we’ve released […] when creating it, I don’t think that either of us has a set thing in our mind,” Ward says.

Ward also defines the band’s songwriting process as organic, given that most of their songs, he says, either sprout naturally from a jam session, or, at most, from a simple base.

“Sometimes, I’ll come up with the skeleton of a song and show it to Marie, and then we’ll take it from there. One track on the record, ‘SWDs’, that just came from us jamming,” Ward says.

“In the cases of the ones that don’t come around spontaneously, it really isn’t until we both play it together that I think the songs start to really take shape or come to life. The two of us playing together is really the jumping off point of the song,” he says.

For Uhler, each one of Eureka California’s albums evokes memories of past hardships. Roadrunners, she says, came after a bumpy ride with a dreadful work situation, health problems, and, overall, a troubled mind.

“In each album, we’re going through long-term difficult situations. In this album, for me, it was this job that I had that was really bad. I had health problems because of it. Thinking about the songs on this record and the practices we had leading up to the recording session, sometimes it was really hard to feel creative, or even to feel like playing. We couldn’t tour too much because I wasn’t able to physically be in a car,” Uhler says. While each Eureka California record takes the band to a different place in their pasts, the ages of songs on Roadrunner, Uhler says, span anywhere from the duo’s birth almost ten years ago, to the very date they were recorded. From “Perfect Grammar,” which is a developed version of a song Ward had written back when the band first arose, to “JJT,” a piece Uhler wrote about hard times in Athens.

“Except for maybe our first one [‘MKUltra’], all the songs keep coming from different time periods in our band. The oldest one, [‘Old Grammar’], is ten years old almost, and our newest one we finished up while we were in the studio,” Uhler says.

“[JJT] that was about this horrible job I had, and about how we lived in the poorest county in Georgia, one of the poorest in America, with one of the greatest income discrepancies, and everyone here, all the artists here, are struggling because there aren’t secure jobs that pay fair wages […] even when I worked full time, it wasn’t really full time, and there was no security. I feel like I’ve been dealing with problems like that my whole life,” she says.

While both Ward and Uhler work to make ends meet, there is little time nor energy left to squander on creating an identity for their music to follow. Instead, they prefer to allow an identity to follow their music. Be it their style as a band, their lyrics, or the instrumentation of their songs, the pair is committed above all else to a sense of authenticity in their work. The goal, Ward says, is not to write the perfect song, but rather, the one that is most true to who they are.

“Honesty in our songs is the biggest thing. Who we are on stage is the same thing as who we are off stage. We both work all the time and have jobs to support ourselves, and then do the band when we can, so our songs are always grounded in reality,” Ward says. Having no two albums alike, no two songs alike, and no two years alike, Eureka California writes, performs, and records only what comes to them naturally. In anything from basement shows in New Jersey, to touring England, it can be said that the duo appreciates the integrity of their sound more than the size of the stage from which it is created.

Looking forward, neither Ward nor Uhler has a specific vision of where they would like to see the band go. Discussing future aspirations, the duo held and shared only one clear intention: to continue to be Eureka California – nothing more, nothing less.

“I just want to grow as a musician, naturally. Just by continuing to play, and playing shows, and listening to more music. I think that the whole nature of this band is to just keep saying: This is what it sounds like when we play music together,” Uhler says.