Get to Know Retro Stefson 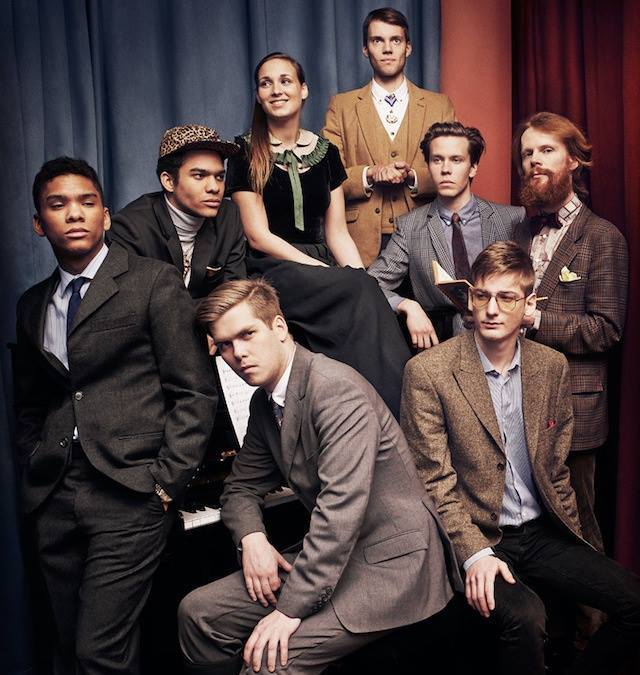 Have you heard that joke about when Han Solo walks into a bar? Well, Icelandic octet—and avid Star Wars fans—Retro Stefson embodies the scene where Han Solo strolls into the Cantina on Tatooine. Walking into one of their shows has an altogether foreign appeal, while retaining something familiar at the same time. Yes, there are plenty of sights you will see at any show: the dimmed lights, drums, the hum of musicians warming up to play. But the fact is that Retro Stefson takes this familiarity and introduces their Icelandic culture to shake up the norm from what you’d expect to see in the States. The senses are indulged, both visually and through audio ingestion. It’s this unique sound that’s made them one of their country’s most famous musical acts. And now they’re trying to spread that popularity to America.

Their music is simply organic. According to lead singer and primary songwriter Uni Stefánsson, the band makes music that sounds good and the words come afterward. When asked whether he has any specific messages in his music, Stefánsson responds, “No, definitely not, it’s more spiritual relation if anything.” Retro Stefson’s sound blends electronic dance with catchy beats, and sometimes even unique African undertones. The process itself is about making music out of love, the same way mothers bake delicious chocolate chip cookies from scratch. Retro Stefson can rely on writing appealing music on pure talent. There are no convoluted messages to detract from their sound. There is no white noise when it is about the music.

The band itself has been together for years; this allows them to understand each other on a level that some achieve only through the Vulcan mind meld. It requires great coordination to get eight people together to produce top hits in their country, all while balancing personal lives, friends, and school. Their third full-length (self-album released in 2012) reached Gold status in a year and lead to their breakthroughs at the Iceland Music Awards, in addition to a Nordic Music Prize nomination. The track “Glow” (watch above) received acknowledgement as both Song of the Year and Video of the Year. “Glow” is a siren song that enchants the listeners, which when combined with the visuals of Retro Stefson’s hometown in their video adaptation, adds a fantastic sense of charm.

Retro Stefson takes up the entire panorama of the stage with its eight members. Certainly it sets them apart from more typical bands, as if they needed any help. Their cast is: Unnsteinn Manuel Stefánsson, or Uni for short (lead vocals and guitar), Þórður Jörundsson (guitar), Logi Pedro Stefánsson (bass guitar), Jon Ingvi Seljeseth (keyboards), Þorbjörg Roach Gunnarsdóttir (synthesizer—what’s a dance band without a synthesizer?), Haraldur Ari Stefánsson (backing vocals and percussions), Gylfi Sigurðsson (drums), and Sveinbjörn Thorarensen (also synthesizer—because, well, more synth). (Writer’s note: Please don’t ask me to pronounce them all just yet, my horizons have not yet extended that far).