Exclusive Interview with Phil Anselmo and Jimmy Bower of Down If a mystical experience through heavy metal perfection and musical genius is what you seek, then you have found it in its purest form with New Orleans’ very own metal gods Down. With such a natural flow to their sound, from this creation of highly skilled, talented and intricately versatile band members, it’s impossible to not find it magical. And luckily for us metal worshipping hounds of Hell, a new offering of the gods has been bestowed upon us in the form of their new EP, Down IV Part II. Down’s influences are derived from an array of genres including hardcore punk, blues, southern rock and country. Being a die-hard metal head in 1995 with a very strong addiction to bands like Pantera, Corrosion of Conformity, Eyehategod and Crowbar, I was the first kid on the block to score their classic debut album NOLA, which actually hasn’t left my CD player since.

Nearly 20 years later and they are still just as real, innovative, iconic, influential and amazing as well as a symbol of brotherhood and friendship within the metal community. I was able to touch base with drummer Jimmy Bower and lead vocalist Phil Anselmo to learn more of the secrets to their musical brilliance, the influences that helped infuse their sound, as well as the new album. Jimmy Bower needs no introduction – both as a guitar player and a drummer, his involvement with bands like Eyehategod, Clearlight, and Superjoint Ritual clearly speak for themselves.  He is perhaps most iconic for being one of the pioneers of Sludge Metal.

When asked about what he was listening to lately, the southern gentleman replies, “I’ve had my same ‘playlist’ forever man; a lot of David Allan Coe, Willie Nelson, Hank Jr., Hank Williams. That’s my whole take on punk rock…it’s that whole outlaw thing from the late ’70s and early ’80s. I’ve found a lot of heaviness in that sound, also a lot of inspiration from it.” When asked if punk rock played a role in terms of influence with the origin and immortalization of their amazing flow of sounds, he responds, “ I definitely think that Down has that punk rock heritage, we have that energy, and we just let our true emotions take over. I mean not to sound cheesy about it, but…if you’re getting pissed off, get pissed off with your instrument…It’s better to pick up a guitar and scream from that or pound on the drums and scream from that than it is to actually physically cause harm. I think what’s cool about metal is deep down in most, if not all metal heads, is a pissed off punk.”

I was curious as a fan what a band like Down does in the studio that makes it such a magical experience for the listener, to which Bower states, “It’s an hour and a half drive, so we all just get in one car and go over there and we just jam. I think once we’re all in that room it’s all about focus and I everyone’s really good at bringing out the best in each other. Because that’s what friends do man, that’s what friends do.”

Throughout the duration of the conversation with Jimmy, I was able to get insight behind the recording of their debut album NOLA and the commercial success that it brought; he recalls with fond memories, “That was a beautiful time, man. Collectively we were all in the same mind-set at all times. If you sit in a room full of friends and listen to a Saint Vitus record, burn some weed and have a few beers that’s a good feeling and you can’t pick up on a music vibe any better than that. So I think we were able to take from that and write some great songs with it. As fun as it is for fans to enjoy hearing our records and hearing us play live, it’s just as much fun for me to be playing it, you know? I just feel blessed to be in a band that can relate to so many people.”

He continues, “We’re not Metallica, but I could understand the impact we’ve had on the present-day metal scene. I mean, even in Eyehategod and my other bands, we aren’t doing anything that any other band hasn’t done. Like the Melvins, or even simple blues bands. I can’t emphasize enough the importance of blues. We just take what we love from the music, add a little shit here and there and let what inspires us take over.” 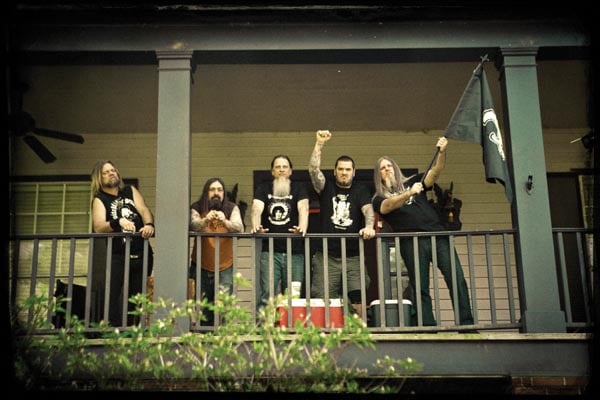 He was more than happy to let me in on some background history as the guitarist of Eyehategod, and he wound up touching in on the tragic loss of his dear friend and the band’s former drummer Joey LaCaze, and how Jimmy was able to use his triumphant will to help inspire him on the new Down EP: “About two weeks after losing Joey, we went in the studio to record the new Down EP, and that record became more than just a record for me. It was a way of mourning. But you know when bad shit happens, it’s best to create something out of it and look forward to the future, man. I even played Joey’s drums on the record. It means a lot to me.”

To say Philip H. Anselmo is one of the central figures behind both the heavy metal and hardcore revolutions is an under-statement at the very least. He is not only one of the most inspiring, original and influential vocalists in music history, with one of the most charismatically charged stage presences, but his expansion of musical creativity is something of a force to be reckoned with. Aside from being the legendary front man of Pantera, he’s been involved with countless other bands such as Christ Inversion, Philip H. Anselmo and the Illegals and Superjoint Ritual, to name a few.

In addition to his musical endeavors, Anselmo is also the owner of Housecore Records. “We are a ‘band’ label, and what I mean by that is I purposely started this record label for a band-friendly environment; I know what it’s like to be tied down with major record deals that eat up your entire career.”

Phil has all of the elements of the ideal front man: well spoken, intelligent, poignant, honest, relatable, and philosophical. “I love words,” he elaborates on his lyrical content, “so much so I consider myself a bit of a wordsmith. I love throwing the listener a curve ball once in a while, because in my mind there are cryptic phrases that may not make sense when they’re put together, but phonetically they can capture attitude…My intention is for the listener to grab something out of the old lyrics and make something about them that I never even considered when writing them, and that’s I guess what you would call the magic of it all.”

He goes on to discuss his early exposure to music, saying, “I guess the starting point for all this would be something I probably got as a young man from watching and discovering hardcore bands. When I was 15, I was a big metal head and I was kind of aware of the contingency of hardcore, but really I was still a metal kid at heart and then I went to a show where Motörhead played in New Orleans and the opening bands were Hallow’s Eve and surprisingly enough Agnostic Front; I came away from that show with a whole different understanding of what a real, gut-level, stripped down, close-to-their-audience type of band Agnostic Front was, and that’s something that I really wanted to emulate and I didn’t see much of in heavy metal.”

When I ask which singers motivated him the most, he’s quick to respond: “I think I take from a lot of different genres. The Beatles were a great influence vocally – Lemmy, Robert Plant, David Lee Roth, absolutely Paul Di’Anno, obviously Rob Halford was a huge influence and then honestly later, because I swear I’m the type of guy that never quits getting influenced and I’m not afraid to use or do my take of what the influence may be: Joe Caper from The Righteous Pigs, Paul Bearer from Sheer Terror, heck even Peter Steele back when he was in Carnivore, Rodger from Agnostic Front, Henry Rollins, Layne Staley, Frank Mullen from Suffocation…Seth Putnam from Anal Cunt, Mike Williams from Eyehategod, his attitude and tonality totally influenced me!” I ask Phil if we could expect the same kind of atmosphere from the first EP to be reprised on the second. He proudly declares, “The second EP to me is superior, and maybe that’s coming from the fact that the material’s real fresh. On this recording it was our bass player Pat’s second time around with us and he was a great contributor to the sound on the new EP. And our new guitar player Bobby came in as a guy who’s been watching us for almost a decade! Whether he’s been stage manager or guitar tech, we’ve always known that he’s a great guitar player and he fits the bill for the band, and he was always our first choice. The infusion of those two guys and what they brought to the table was like a breath of fresh air, an injection of new blood, and it felt excellent to have that.”

He goes on to say, “I can’t wait for the people who actually give a fuck to give some feedback and come out to some shows and feel it. We definitely wrote songs on this fucking record that are going to be played live, and meant to be played live. Today’s new songs are tomorrow’s classics, so I feel that way very much about this new EP. I can honestly say that in the studio, anything contributed comes very naturally, organically and we waste very little…As long as a band can talk things out and communicate with each other and still stay productive, that is a mark of great health. I can’t think of a better word for it than ‘healthy.’”

On the topic of touring, I listen in admiration as he explains, “Once I get my hand wrapped around that microphone, and the stage is there and the crowd is there, that’s when I’m most comfortable in life. When I’m on that fucking stage everything that could be considered a negative becomes a positive. Playing live is the most honest and comfortable I could ever fucking feel. I love meeting the fans, meeting new bands, I love all that fucking stuff, man!”

Being that I spent my entire impressionable youth wanting to be just like Phil Anselmo, I simply had to ask what he would say to an aspiring musician in today’s scene, and he methodically responded, “I would say practice constantly. Whether on your own or with your band, take 20 influences and make them your own and then eventually out of those 20 you’ll make something fucking original, and if you’re in a band, the main focus would be originality, innovation; no matter who you’re influenced by you got to come out with something that has not been heard before.  And I would say that if you are in a band that does well, then communication is the key. You have got to be able to talk to each other, no matter how awkward or tough it may be. You’ve got to be able to talk.”