It’s more than likely a school night. A light glows from a room in Sacramento. A microphone plugged into a karaoke machine hangs from the rafters of a teenage bedroom.  Toiling below the mic, two pre-teen punk rock hopefuls sit in front of their instruments and begin picking through notes, forming what will be the first song of their catalogue. It’s 2007, and the members of Dog Party are 11 and 9 years old.

Sisters Gwen and Lucy formed the band out of a love for ’70s and ’80s punk music. Encouraged by their parents, they quickly blazed a trail most independent musicians would envy. Since 2007, the group has released two full-length records and is preparing to release their third (Lost Control) with the help of Mike Park and Asian Man Records. The girls have merch, a record deal, and they’ve just completed yet another national tour. Side note: they still tour with their parents. And yes at 17, Gwendolyn has just gotten her driver’s license, but points out she wont be able to legally drive her bandmate/sister until she is 18, due to California state law.

The interesting thing about Dog Party is that they’re incredibly well behaved. Although it’s interesting on paper, the 17-year-old with the guitar and the record deal is surprisingly normal. Dog Party likes playing shows, but goes so far as in our interview to point out that, “During the school year we try not to play too many shows during the week. We just played a show last night (Thursday) and it was really tough! I had an essay that I had to work on the entire time, and even missed our friend’s band, who I really wanted to see. We just have to really manage our time.” Their latest effort, Lost Control, is incredibly accomplished. Their sound lies somewhere between The Runaways and Best Coast (emphasis lying arguably on the latter, somewhat unintentionally). Their new record was recorded on tape, a process the girls prefer over digital, as recording to tape is, as they put it, “more genuine, more raw and full of energy.” This begs the question: What garage band do you know that’s made it through three records? Better question, what 15-year-old has an opinion on tape vs. digital that they can actually back up via a catalogue?

This isn’t meant to be patronizing, either. A quick jog around the Internet exposes interview after interview of the same question regarding school, boys, age, parents etc. Dog Party basically answers the same ‘Top 5’ questions worldwide. No wonder they have a publicist. I imagine at this point answers can simply be copied and pasted. Their story begs another question: How important is age in music these days? Was Dog Party arguably too young at its inception? Do they often feel patronized due to it? They’re also both female and in the punk scene, and although we’d like to think that was all cleared up by Ms. Hanna (Kathleen) back in the ’90s, is still mostly a major issue.

The girls address the topic with ease. “We choose not to really look at age or gender in relation to the bands we listen to or the shows we play, but I guess it could affect some people before they actually get to know us.” Age or gender apparently does not factor into Dog Party’s universe. They are without interest and can’t be bothered by either supposed hardship. The only downside they care to mention is, “It limits the venues we can play and we occasionally miss out on [performing live] with some really cool bands because of it.”

We’re at a stalemate. Dog Party is either so incredibly positive that they float above any and all conflict, or they are the most media-savvy teenagers in public school. They are normal, happy kids. They live normal lives and probably eat dinner every night with their family. But they have a publicist, which is what makes this feel different. They aren’t prodigies or musical masterminds. Their worth is built upon their relationship as a team. Their value is as a band; Dog Party is indie-rock’s most successful (literal) garage band. 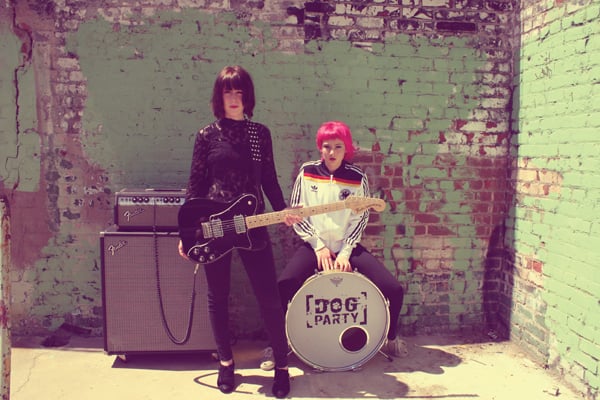 They don’t hang out with people their age. They go on tour with musicians like Kepi Ghoulie (a punk scene staple for 20 years). Their first show was opening for Agent Orange. Dog Party goes home and does their homework, but the bands they open up for are the same age as their parents, and maybe that’s the real lynchpin here; Dog Party is two young ladies with incredibly supportive parents. Maybe at the end of the day this isn’t about talent or luck, but about a support system built around the creativity of two young people.

As their label owner Mike Park points out, “You don’t see many parents who are at every show helping sell merch and just being there to support instead of trying to show the world their kid is the next superstar.  Everyone is humble and understands the punk ethics involved in this DIY endeavor.” Maybe what we really need are for the parents of these two bright young musicians to write a book on how to help kids blossom artistically. There aren’t a lot of kids out their who have three records under their belt, but there also aren’t many parents who would let their kid hop in a tour van at 17 and haul ass around the planet. This is a “chicken or the egg” scenario that should really be given some thought. Gwen and Lucy are positive about their musical future. When asked about their upcoming plans, their only goal is “to have as much fun as possible! Make good records!” In some ways talking to Dog Party feels like talking to the incredibly positive sheltered kid in your math class. Except Dog Party isn’t sheltered by a social construct or an overly protective patriarch. They are held boldly in the arms of a music scene and network of people who’ve chosen to foster and encourage two kids with big ideas (and killer punk songs, to boot).  Does Dog Party have more records than the average garage band because they are exceptional? Or is this a shining example of what two kids are capable of when we empower them to blaze their own trail?

Feel free to think about that one…