DIRTY STREETS open up about new LP ‘Rough and Tumble’ Dirty Streets are a down n dirty (no pun intended) 3-piece rock outfit from Memphis. What can we say? These guys totally rip, and we loved them so much we featured them as our Elixir Strings artist of the month recently  — so if you haven’t checked out our YouTube channel in a minute, head there now to see some killer clips of the band, and click here for the exclusive premiere of their new single “Walk a Mile in My Shoes,” taken from their latest LP, our now on Alive Naturalsound.

We recently caught up with guitarist/vocalist Justin Toland to learn more about the band, the recording of the new album, and the laziest way to find new drummers imaginable. For the complete interview, give a listen to our new podcast, Apple Podcasts Episode 2.

What can you let us know about the new record?

It was postponed a little bit due to everything that’s going on, but I’m happy it’s coming out. It’s got a lot of songs on it that we had recorded previously but in more of a studio setting. This was recorded in a totally different way — it was recorded live…in Memphis. And it has two covers on it, as well, which is something we don’t usually do.

We premiered one of those, what was the other cover?

Maybe you can take us back and tell us how the band got started, and what led you up to the new record.

We started originally back in 2008, with the original lineup. Previous to that, Thomas the bass player and I, had met each other at a party at my house sometime around 2007. And I remember Thomas had said, ‘Hey, I’m looking to start a band with someone looking to do something a little blues/rock oriented.’ And at the time, I was really trying to find someone to do that, but it was proving impossible.

I had all these demos I was working on, and I hadn’t showed them to anybody, so I said, ‘Maybe you should listen to them.’ We listened to the demos, and that just started the friendship between me and Thomas, and the concept of the band. Really, we had nothing going on, we didn’t have a drummer. It’s kind of impossible without a drummer (laughs). So, we spent the next year or so playing with different drummers…we played with maybe five drummers total in the span of a year.

We were just at the end of our ropes because the last drummer we had ended up getting arrested…and had a bunch of legal trouble. And we were like, ‘What are we gonna do?’

And [Thomas] said, ‘There’s this guy down the street who I hear playing drums every day when I’m at my mom’s house…He sounds like he’s really good.’ And in my mind, I’m like, ‘What are the chances this guy a) actually being a good drummer, and b) interested in the music?’ I thought it was a longshot, but…it kept happening. We’d go by and hear him playing drums out the window. So finally, Thomas got up enough courage to knock on the door and say, ‘Hey, I hear drums coming out the window, can you tell me who’s playing?’

And Drew came down the stairs…and we got lucky — he wasn’t in a band yet because he just moved here. 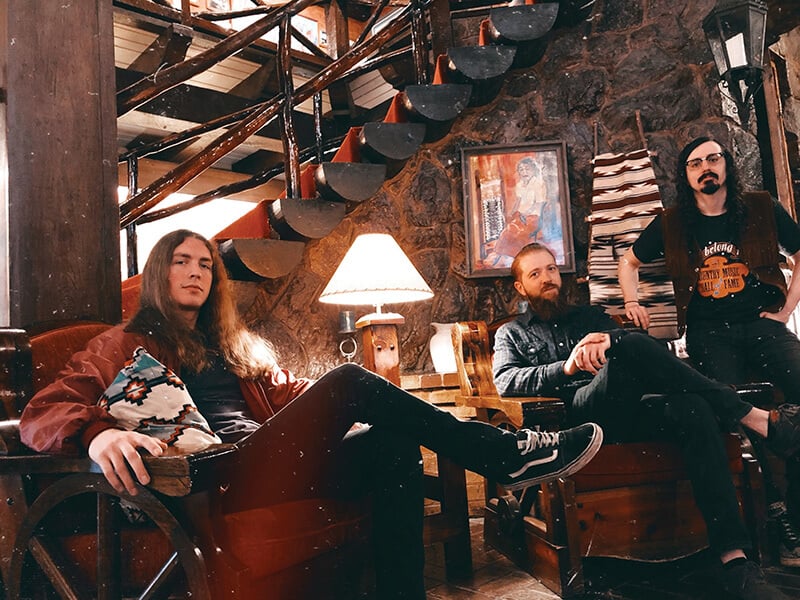 That’s one way to get a drummer. You just walk around town and keep your ears open, I guess…

Yeah, just knock on doors and hope they can play (laughs). He’s been in the band ever since.

How long did it take for you to get signed and do the first record?

It took another year and a half or so to even find our sound, you know? And build a chemistry enough to make a record. That [first] record was released around the end of 2009, which we did independently. This will be record number…six, I think? The one that’s coming out [now].

And you guys are on Alive Naturalsound, which is a really great label. They put out a lot of rootsy rock n roll, I know Buffalo Killers are on the label, and Radio Moscow. Can you tell us how you got on there?

I’ve been a fan of the label for years, when we first started the band, we had both mutually found the label around the same time. There were bands like Radio Moscow and Buffalo Killers, Black Keys put out their first record on Alive, so we were just blown away by the quality of the music on the roster.

It was all just American blues/rock or American rock n roll music. I loved it, I thought it felt real and sincere to me. That seemed to be the undercurrent of the label: sincerity. So, years went by and around 2011/12, we had played with Lee Bains and the Glory Fires and the second time, he said ‘You should really talk to [Alive] about being on the label.’

That was just a passing conversation, but about a year later we toured with Radio Moscow and after that tour I got a call from Patrick at the label. We struck up a conversation and it was really striking to me how deep the tastes of the label went and how much he cared about it music. It’s been a great relationship from there on out, this’ll be the third record we’ve done with them.

Let’s talk about the band’s creative process, and how you approached the studio differently this time.

Usually, it’s been the same. I have demos, and I share them, and that’s usually the beginning of the song, me coming up with ideas and putting them down in a super raw form. As a band, we digest whatever I have and turn it into a song. It’s a real band effort…the biggest thing is getting the feel to it, you might have the parts there, but it takes all three of us to get in there and get the feel on it, which is something we’ve always had as a band. But for this new one, you recorded live.

It’s kind of funny, it was sort of opportunistic. We were going in to do a live video concert, and once we did it, they start the recording, they start the cameras, and you go from beginning to end. You do your set. And once we recorded it, I heard it back, and it was just great. It was finally just the raw version of us playing, and it was all feeling. Nothing to sort of mask what it is, there’s no sheen on it…it was just a mix, and it’s done. Hence the name Rough & Tumble. I liked the raw element of it.

So, we just decided maybe we should put this out. I went to Alive, and they really dug it, which was great. All in all, we just happened to get really lucky, we captured a magical moment in time, you know?