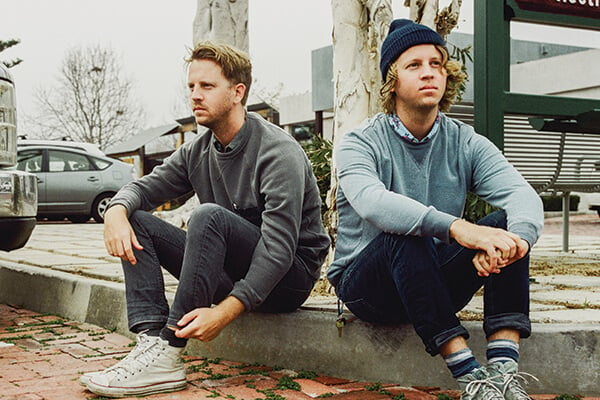 Cayucas recently retreated to Woodinville, Washington at rustic Bear Creek Studio to work with producer Ryan Hadlock on their latest Dancing At The Blue Lagoon [Secretly Canadian]. The goal was to capture the right combination of vintage vibes and modern technology to create a warm, natural ambience on their West Coast inspired, laid-back sound.

The band, comprised of brothers Zach and Ben Yudin, spent time working up demos at home to create a blueprint before travelling from SoCal to the Pacific Northwest, where Hadlock worked with a group of trusted Seattle area musicians that helped build on the Yudin brothers’ ideas – producing a panoramic post card of post Laurel Canyon-era songcraft.

There is a very acoustic feel to the recording. How did the process start?

It started with the acoustic version [“Dancing At The Blue Lagoon”]. My brother [Ben Yudin] and I had written out and recorded demos in my apartment.

So, you demo in your apartment. What kind of gear are you using?

I use Logic Pro. I have a Blue Bottle microphone and it’s just a place to record and edit. I’m not trying to make it off the demo. I’m just trying to write out all the parts so they sound pretty good and I know what to do before going into the studio.

So how does the demo process work between you two?

He would send me a demo with electric guitar. He’d write the song on guitar or piano. He wrote the main riff on guitar [“Dancing At The Blue Lagoon”] and I took it and added a vocal and the lyrics. That was pretty much it for the demo. We just kind of went back and forth until it was finished.

Do you run direct for the demos?

Yeah, then I do all the vocals and the lyrics. Do you use patches in Logic Pro?

I just use Logic Pro and whatever is available as a plug-in. I did a little bit of sampling on the demos but when we did the album everything was recorded live. There was no MIDI or anything. When I’m writing a demo and I want to do a violin and cello part, I end up recording that as MIDI information; that’s the way it works. But, when we go into the studio and record we just have a real violinist. She can play it really easily.

Do you feel like it saves time by having the structure on the demos before going into the studio?

Yeah, exactly, you save time. There is no harm in fleshing out the demos as much as possible but the gist is that it gives you a real clear focus on where the song is. We had one or two demos that were real basic – barebones – just like a guitar riff or something. Some things came together in the studio but for the most part, we like to have everything pretty much planned out.

You have a lot more complex song structures on the new recording.

Well, for example, one of the songs “Ditches” we wrote a very basic piano chord progression. When we were in the studio, we thought why don’t we get a really good pianist and just kind of add a little bit to it, make it sound just a little bit prettier.  We had this guy [Charles Wicklander] who our producer uses a lot – he came in and took the basic chord progression and added nice little fills. He was really good so that is what it evolved into.

How did you end up working with Ryan Hadlock to produce the album?

We talked to a handful of people and there was not like a personal connection, but we really liked The Lumineers album that he had done.

So you knew his production techniques.

Yeah, his production. We liked the sound.

Now did you work out of his studio?

So, you relocated to record. How long were you up there?

We did it all in three weeks.

Did you bring any musicians with you from LA?

It was just me and my brother. We did a lot of the instrumentation. Our friend Davey, who actually lives in Seattle, did all the drums for the album. He’s a really good drummer. He does percussion for Modest Mouse.  The three of us were the core people and then we brought in Matt Santos to add some bass to a few songs. The producer connected us with the cellist, horn players and pianists, too.

There are a lot of dynamics within the song order as well as within each song.

We went in there thinking without any boundaries. We sort of went where we wanted and found a way to record it.

What software and hardware was he working with?

Obviously, he’s using Pro Tools [HD]. He has a mix between vintage analog stuff and new [gear]. Like a new production room in an old setting. We let him do his thing. We really liked his ideas. I mean, we wrote out the string arrangements. We just had our friend play them. They were notated out but he did add his own little pizzazz to them.

What was the go-to microphone for vocals?

We did kind of an interesting set up for vocals. I use three different microphones for the voice.  Every vocal is tripled. It’s powerful when you triple it; it kind of puts more right on top really well.   I had the Neumann [87 or 47 per producer, Ryan Hadlock], a Shure SM7 and then the last one was the RCA mic, which is total vintage, the harshest of the three.

The SM7 kind of creates a fat upper mid-range, right?

The SM7 definitely has a lot of punch. Very raw is the best way to describe that, and it sounds great but the Neumann is just great; it sounds so good [on record].

What do you think was the key to this recording session?

The room. The space of the room really helps. It gives it a natural reverb. It’s a very big, wooden room and from the kick drum to the guitars, it just gives everything a nice reverb.