Bellingham’s Wild Throne is no stranger to the Pacific Northwest’s noise rock scene. Along with former labelmates Gaytheist and Deadkill, the band has been a key part of a growing rock revival in the Seattle/Portland area. This spring they dropped their latest EP, Blood Maker, and we spoke with guitarist/vocalist Josh Holland about producing a record with Ross Robinson (Korn, At the Drive-In, Blood Brothers), changing the band’s name for the sake of their career, and why their fans respond so well to vinyl.

When we last spoke, you were called Dog Shredder. What led to the name change?

It was something we had a window of opportunity to address and we just dealt with it while we still could. We were coming up on a tour far larger than what we were used to and about to put out a record far better than anything else we had done. The moniker was fun, but it eventually started to screw with the band that we were maturing into.

Have their been any sonic changes since the name change?

The music is still chaotic and a little out there, just much more focused and I’m singing a lot more now, which is new. I’ve always wanted to have more of a vocal presence for the band, whether that be from me or someone else at some point. Ross [Robinson], our producer on this one, really encouraged us to dive in with more vocals and it really worked well. It was tough, but I’m very proud of it.

Let’s get into your songwriting process. Were there any major differences this time out as opposed to your last record?

On our older stuff it was kind of like paint thrown at a canvas. We would have so many ideas at practice and we would throw everything out there as fast as we could play it. Now we experiment more with song structure and vocals and it’s been much more focused. I’ll bring in the raw structure of an idea…and then we size it all up together and it blossoms in the room with each of us finding our way through it. We keep high standards for what we want to put out there and we’re honest with each other about what rips and what doesn’t hold. We record lots of demos and pass them back and forth trying to find the best stuff. You’ve released a few EPs now as a group. Is there a conscious decision not to put out full-lengths? Or has it just happened organically?

Every time we’ve had opportunities to record and release something it’s always just happened that way. We’ve been wanting to a do super kick-ass full-length since day one, but resources and timing and other variables keep putting it off. It’s certainly not due to lack of material, though. We’ve got an album’s worth of new songs in the hopper, some of them we play live. It will get done; I think the time has finally come.

You mentioned you worked with producer Ross Robinson on the new record. Did you approach the studio any differently with him?

We approached this SO differently. Working with a producer was very new to us. Ross wanted us to get into the songs at depths we had never reached for. I think this is pretty well documented about his style in the studio. He wouldn’t let us go in and do a take of ANYTHING until we all collectively felt our purpose and intent with the songs. He tried to make every moment count. He’d tell me to stop trying so hard, to risk everything and play or sing terribly and just let go. And the more I did the better the takes would get. It was really, really amazing.

This EP is being released by Brutal Panda. What caused you to leave your previous label, Good to Die?

I wouldn’t say we left Good To Die. We’ve always felt a really cool family vibe there and a family that hopefully we’ll always be a part of. We just had a one record agreement and there wasn’t ever talk of a second release from either side. When the time came to do something new, Brutal Panda had been reaching out to us a lot and getting super stoked on the band. That enthusiasm won us over and it was a logical move forward for us. They’re great, super smart dudes and they’ve got a lot of connections in their network that have helped us get the word out to a larger population. 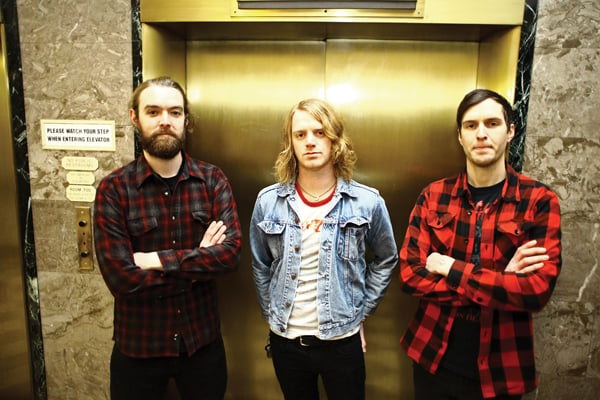 Aside from the label, are you handling other band business in a more DIY fashion or do you now have a team to help out with those aspects of your career?

Yeah, we’ve built up a really solid group of people that help us with our booking/legal/management needs. We are used to doing everything ourselves, so it’s really nice to keep the music and the performing as our main concern. We’ve worked really hard and been extremely fortunate to have had the opportunities that allow us to do that.

You guys are releasing this EP on vinyl in addition to digital. What do you think still attracts people to that format, and do you do anything specific to prepare for a vinyl release?

For this release we didn’t, but we have for the previous vinyl releases. The tests came out sounding fresh on wax so we didn’t need to tamper with it. The vinyl resurgence has been interesting. It’s a way to keep true fans of music tangibly connected to the bands they love, of course. The art has been devalued so harshly over the last ten years. The digital age has made everything arrive faster and freer and with that, it disappears just as fast. Vinyl is great for music, music makers, and music lovers and I hope it’s not just some kind of bubble that pops. I hope it sticks around.