Catching up with Fierce Bad Rabbit Four years in and four albums down, Fierce Bad Rabbit is debuting their latest record, The Maestro and the Elephant. Although sporting more of an indie feel, this LP features fierce guitars and catchy vocals that are likely to get stuck it your head and quickly make your music library the most popular among your friends. With only five members, this group is likely to give Arcade Fire a run for their money.

When did you start making music and what made you decide to take it to the next level?

I started at a young age. When I was younger, my Grandma taught all 13 of her grandchildren to play piano. Music was always around growing up; my mom and my uncles would all play at Christmas and Thanksgiving and slowly I started to pick up a guitar and play along with them. I learned with them as I went. Being around music as I grew up, it wasn’t ever a conscious decision of learning. Eventually, I realized it was something I liked to do.

As far as Fierce Bad Rabbit goes, it all started about four and a half years ago. I had a bunch of original stuff I wanted to try and write with a band. Fierce Bad Rabbit formed because we all played in bands around the area, and I knew a number of the other members from other bands because I’d just met them around town. I made a few phone calls and we got together and recorded the songs and people liked it. It was just a side thing that grew into something bigger. I didn’t necessarily know I wanted to work with them but had sort of put them all together slowly.

Tell me a bit about the band’s approach to writing.

Previously, we had the chords and the song structure all written, but now we write an entire song around a riff. We’ve never been successful by writing lyrics before. The lyrics are born out of the melodies and riffs. We tend to just hear something and play it over and over again until we find lyrics to match it.

It started out me just doing the songwriting, but once we started working together, we started writing together. It was more one-dimensional then, and since it’s grown into something more multidimensional and we have our own sound. We are still very focused in our writing, but certain things catch each of us, so we just sort of play off of each other.

What sort of gear does Fierce Bad Rabbit use? Do you guys use vintage stuff?

We like vintage gear, but it can have problems and you have to baby it. We have a Vox AC30; it’s a reissue but not really old. It’s a Custom Classic 2, and personally, I love that amp but it probably uses more watts than I need. I run that through a few pedals – I have a weird system that I’ve fallen into. I have a cheap delay pedal and a chorus pedal that I keep on low delay. It keeps a natural compression I like. 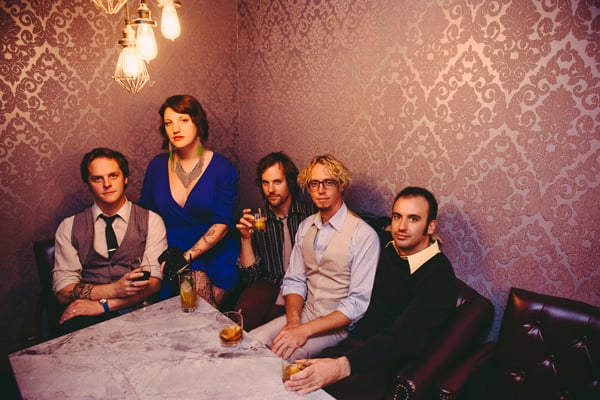 What is going to separate The Maestro and the Elephant from Fierce Bad Rabbit’s other albums?

The Maestro and the Elephant is kind of the new and the old all together. It had some jams on there that were old that we never did anything with, all the way to writing songs in the studio as we’re doing it; there was a lot of studio writing involved in the production of this album. Overall, it’s a mismatch of different techniques than we’ve had in the past.

Who do you think are the most influential artists to Fierce Bad Rabbit?

Personally, I love David Gilmour. He always produced riffs that were as catchy as the vocals, if not more. That’s something that I’ll always be on an endless quest for: a memorable melody on guitar.

Now we’re going to do a lightening round. Try and answer the first thing that comes to mind.

Favorite song of your own (any album): “Shine the Light”

Favorite song of all time: “Down By the Seaside”

Best producer of all time: Joe Chiccarelli: he did The Shins’ Wincing the Night Away.

photos by by Josh Neil