One of the first things we will do after recording our background vocals is to cut out all the unnecessary “air” (the space between actual singing parts) from the track. These usually do not contain anything that we want or need in our final mix and at times can even have pesky background noise that is not visually noticeable in the waveform (breathing, shuffling of lyric sheets, etc). If you’re pressed for time, you could patch in a gate plug-in, but it may miss extraneous coughing, paper shuffling, etc. 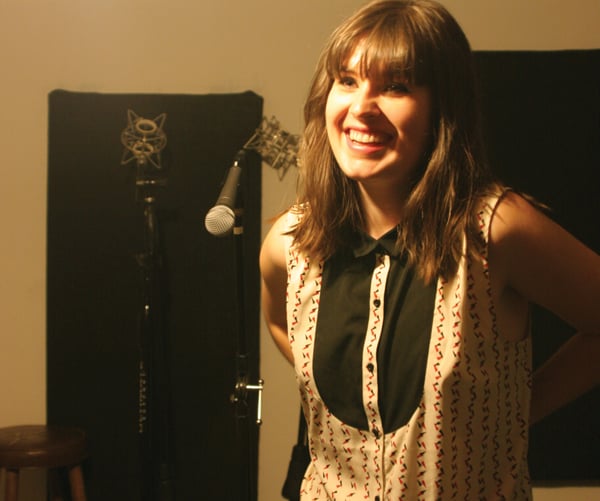 Next, solo the backing vocal take with the lead vocal at equal volumes and listen to each part VERY closely.  These have to be lined up precisely, so now is also the time to chop words and phrases on the backing track and move them until they are tight with the lead.  You should also decide if certain words aren’t needed – if so, you can mute them entirely or fade in/out words that don’t help but just muddy things up.  Open vowel sounds are pleasing, but harsh consonant sounds are not, so unless the backing vocalist’s performance took this into account, you will probably have some editing to do.  For example, if the vocal line is “Chillin’ with my baby,” you might want to fade in on the word “chillin’” to eliminate the harsh “ch” sound.

The dreaded phrase all vocalists hate to hear! As the producer/engineer, it is very important to use pitch correction on your background vocals. There are very few things more distracting in a mix than an off-key harmony. Once you’ve established what the key of the song is, you can easily apply a pitch correction plug-in to your vocal track set to that key.  If you don’t set a key for your pitch correction software, you’ll be forced to use chromatic tuning, which only pulls a note to the nearest half step and can often make the problem even worse.  Also be aware that many songs may change key during a bridge or chorus, so those vocal parts will have to be moved to another track with the pitch correction set to a different key than the rest of the song.

Occasionally you run in to a vocalist whose harmonies are so poor that even the software cannot fully correct it without turning the track into a comically garbled mess. In this situation you have a few choices: a) Fire you vocalists and have someone else record the part or b) Use a manual pitch correction plug-in. We like to use Roland’s V-Vocal, which allows you to see the pitch of the vocal take on a graph and manually click and drag parts of the waveform to the correct note. You can also draw in the waveform, which is great for straightening out wobbly vocal takes and creating more natural note transitions, whereas an automated pitch correction can sometimes sound robotic.

Now that we have tracked and trimmed the fat from our background vocals, it’s time to start mixing.  We usually start with dynamic processing (compression/limiting). Much like everything else in the world of recording, there is not one “set in stone” way to approach compression with background vocals. We suggest playing around with your compressor presets and see what fits. We find that a vintage LA-2A compressor preset is a good starting point for most backing tracks, as it has a way of smoothing out the performance. Play around with boosting the output gain somewhere in the +6 to +10dB range while adjusting the threshold to -6 to -18dB.

Now, solo both the lead and backing vocals together at the same volume and start EQing the backing vocals.  We usually like to roll off the low-end frequencies, starting around 150Hz, because the low-end of background vocal tracks have a tendency to muddy up the mix. From here we may boost some of the high-end frequencies a little to create a thinner, brighter overall sound.  The goal is to get the backing vocal to enhance the lead, so don’t be tempted to EQ the backing part by itself; we don’t really care how it sounds alone.

Once you’ve got the two working well together, bring the volume down on the backing part until it just sits below the lead and move on to panning. If the background vocal parts are harmonies that follow a lead vocal very closely, we will only slightly pan the background vocals, maybe 10-20% in either direction. The idea with a harmony part like this is to have it blend with the lead vocal, so you don’t really want to have it hard panned, as this will ruin the synchronicity of the lead and background parts. If we are dealing with a background vocal that does not mirror the lead vocal, then you might want to try hard panning the track. By doing this, your backing tracks will be less likely to clash with the lead.

When it comes to volume and reverb, you could take a wide variety of approaches. You generally want to make sure the levels of your background vocals are balanced enough so that they blend well with each other and the lead vocal. Reverb should be used to enhance the amalgamation of parts, so in the case of background vocals, we tend to put more of it into the mix than we do with the lead vocal, which we tend to leave more dry.

Don’t be afraid to give backing vocals a try on your next tune.  Many artists are hesitant to experiment because they associate harmonies with a certain musical era, but when done right, backing vocal tracks can make a song come alive.  We hope you’ll try these techniques on your next recording session!