We’re super pumped to be premiering the music video for “La Dah” from Texas singer/songwriter Cas Haley. Check it out below, and pick up Haley’s new LP, La Si Dah, available now on Easy Star Records.

When Cas Haley set out to make the follow-up to his successful 2010 release Connection, one thing drove him in the writing and planning for the sessions. “I kept thinking,” says the Paris, TX-based singer/songwriter, “if I died tomorrow, and my kids had only one musical statement through which to know me, what would I want that record to be?” The resulting record, La Si Dah, is packed with what makes Cas Haley who he is: personal lyrics, musical diversity, outstanding musicianship and authenticity. Adding to this unique vibe is the manner in which the recording sessions were financed; working with the crowd-sourcing website Pledge Music, Haley was able to raise money through his fans (many of whom are thanked in the record). 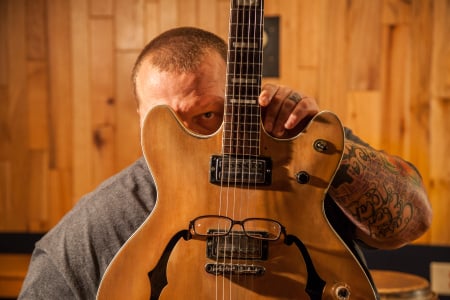 La Si Dah, out May 28, 2013 on Easy Star Records, was produced by Haley himself, with consultation on the recording by his good friend, the Grammy-Award Winning Producer/Engineer Rob Fraboni, best known for his work with Bob Dylan, The Eagles, Keith Richards and The Rolling Stones. When it came to the recording process, the above principles driving Cas led him to aim for a more authentic sound, in line with the honesty and integrity he tries to live by in his daily life. As Cas so passionately states, “Being in a world so heavily influenced by commercialism and the expectations of perfection paired with the technology and tools to synthesize that perfection, in my opinion, has zapped the very essence out of the majority of music today. The last two years I have been searching for the solution to this problem. With the guidance of my great friend and mentor Rob Fraboni, this album is my attempt to find the spirit of music.” La Si Dah’s pure sound and vibe was accomplished by using the recording techniques of Rob Fraboni. “The first thing we did was take away all elements of separation. All the instruments and most of the vocals were recorded in the same room at the same time with no isolation and no headphones. Fraboni is from the day when capturing the sound of the performance was the goal versus manipulating them,” Haley enthusiastically adds.

The 13 tracks on La Si Dah continue Cas’s ability to mine his own personal narrative for poignant and catchy songs. First single “La Dah,” came from a dream Cas had about his grandmother, where she helped him to forgive his father for things he had never done for Cas. (You can stream “La Dah” for free at https://soundcloud.com/caspromo/la-dah.) “Wait For Me,” a powerful ballad, reads like a personal love letter to his wife from the road. “Let Her Go,” a slow burner steeped in old R&B, came out of a weekend spent with his father, jamming together and discussing his parents’ marriage. The nyabinghi-drum inflected “Tally Tally” grew from ongoing conversations with his manager, where the two of them had to come to terms with their own personality differences to further Cas’s career goals. Just as important to the record are three instrumentals (“Jackson,” “Capricorn,” “Trash Day”) that help show off Cas’s natural abilities as a musician, since the focus on him is most often squarely on his powerful voice.

For Easy Star Records, a leader in independent reggae, La Si Dah is an exciting addition to their tastemaker catalog. Easy Star CEO Eric Smith says, “All of us at Easy Star were captivated by the songs Cas created for Connection and were so thankful to be a part of that album. But it has been especially gratifying to be able to continue that partnership with La Si Dah and witness first hand the beautiful evolution of Cas’ tremendous talent.” While the record is obviously not strictly a reggae recording (though it does feature some great straight-up reggae tracks in “Mama,” “Slow Down,” and “Crazy Good Woman”), Easy Star is still a great home for the release, considering it has always tried to connect reggae to a broader musical spectrum, from classic rock to salsa to Ethiopian jazz.

In the three years since the release of Connection, Cas Haley has kept busy with plenty of touring, as well as the release of a holiday EP (Gifts To Give). He continues his time on the road with a number of college shows as a solo acoustic act, followed by a number of club shows and festivals where he will team with his band members to perform much of the La Si Dah album. In July, he’ll make his first appearances in Europe, including a solo acoustic set at the Mighty Sounds Festival in the Czech Republic.