[Editor’s note – we recently chose two artists to test out the rugged, dynamic Electro-Voice ND series microphones (Ainjel Emme and Scarlet Canary). They documented their experiences on social media, and were kind enough to write up these final testimonials after performing and recording with the mics for a few weeks.]

For this review, I tested three new Electro-Voice ND series microphones: the ND76, ND44, and ND66.  I’m already a fan of the N/Dym series, so I was excited to see the progress Electro-Voice made on these new pieces.

First, I did a simple voiceover session.  I traditionally use an SM7B or RE-20, but the ND76 did the job quite nicely.  My vocals were lucid and balanced, requiring only a touch of compression.

Next, I streamed a performance on Facebook Live, employing the ND76 on vocals and ND44 on guitar.  The 76 was remarkably sensitive, capturing details I’m more accustomed to hearing from more expensive condenser mics.  Plosives were harder on this mic than your standard dynamic, but proper technique eliminates that issue (so no excuses!).  The 44 was surprisingly full-bodied on the acoustic guitar.  I was impressed by the warm, natural sound we were easily able to achieve.

My next test was a live video session.  I’m on the sound engineering team at an LA-based showcase series called Badass Bands, where we shoot videos of artists performing live in-studio.  This was a perfect opportunity to throw the NDs into the line of fire.

Our first act consisted of nine pieces in one room, with live monitors.  The second was a high-energy power trio.  Soloing the 76 on playback, we were pretty blown away—not only by the definition of the vocals, but by the isolation from the rest of the room.  The 44, again, proved versatile and more-than-capable on the bands’ guitar amps. 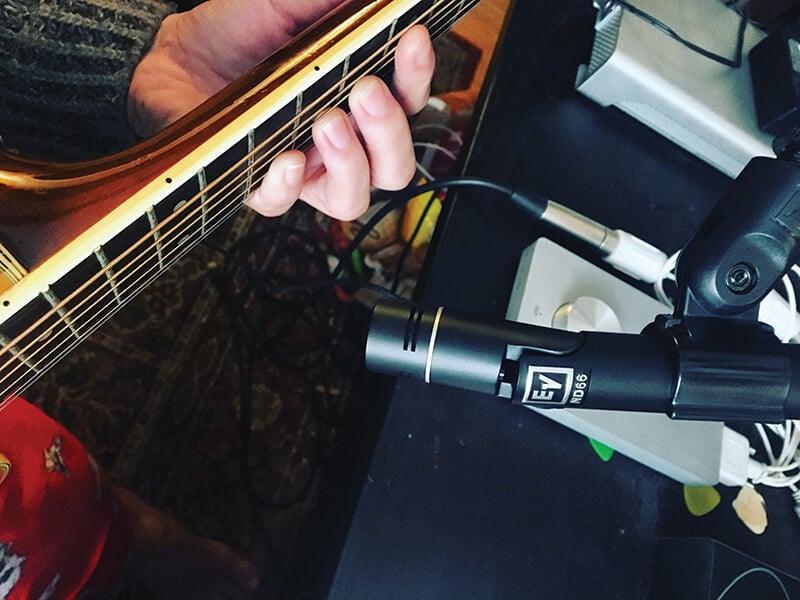 I sampled the 76 through my battery powered busking amp and concluded that the level of isolation on this mic is probably its key feature—virtually no street noise, far less propensity for feedback than other mics.  Lastly, I brought it to a local songwriters night.  After my acoustic set, I was approached by one of the other artists, who is now planning on purchasing one.  On stage, achieving solid pitch and diction seemed to be a bit more effortless than it is with other dynamics I’ve used.  I can see myself using this mic in most live performance settings, and even some studio applications.

Overall, I was very impressed with the ND series.  These are solid, quality tools that are built to last, work hard and offer pro quality at an affordable price. Ainjel Emme and the ND series from Electro-Voice

When you are a regionally touring band, it can be hard to find reliable and affordable equipment that will roll with the punches. When we were chosen to demo the Electro-Voice ND series mics by Performer, we were excited to test out some products that had been on our wish list for some time. Several of our friends in other touring bands praised EV’s durability and superior performance and we now have to agree with them. We used the vocal mics first. Our lead singer Hannah used the ND96 and our bass player Marcos used the ND76. Although both mics provided amazing sound, the ND96 is by far the star in this line. Hannah had this to say, “I can’t believe how clear and crisp the ND96 is. It captured all the facets of my voice, even my screams, on a really loud stage. I didn’t feel like I had to push to get a great performance. I just sang and the mic caught everything. I am in love.”

We used the instrument mics while tracking our upcoming album in studio with Rusty Sun Audio. Now to be fair here, we as a band know exactly as much as we need to know about tracking drums and that is: does it sound good? Cool – then it must be good! So, to properly review the instrument mics, we asked our producer, Nick Nordruft, to put them through their paces and let us know what he thought of them. We ended up trying all the mics and after lots of banging on stuff and adjusting, we tracked all the drums on the album with them. ND series works great on drums in the studio

Nick complimented their sounds saying, “They produce a clear and rich sound that, even dry, is huge.” He also commented on how easy the mics were to position to get the right fit: “the way the ND46, ND44 and ND66 pivot and lock is a game changer. That perfect sound is only a small button push away. No more fighting with stands — everything adjusts right there at the head of the mic.”

Whether you are looking for a vocal mic that captures every dynamic of your voice on a loud stage or instrument mics that don’t quit and adjust to fit any kit or cab, there is a mic in the ND series for you. Trust us. All of us here at Scarlet Canary are incredibly happy we got the chance to test out these mics and look forward to using (and abusing) them more on tour this year.