TOUR TEST: Sending the Audio-Technica AT2010 Condenser Mics on the Road

[Editor’s note – back in July we put out a call for product testers to win and demo the new Audio-Technica AT2010 condenser mics on tour. After all the entries were collected, we chose Boston-based singer/songwriter Munk Duane and California punks Zebrahead. Their final reviews appear below.]

I have been a big fan of Audio-Technica for many years. The AT4033 is a centerpiece for vocals and acoustic guitar in my studio and has appeared on five of my albums and countless tracks I’ve composed for network TV and film. I perform over 150 shows a year, in a very wide variety of settings, from super-quiet acoustic venues, to large package casino stages to full volume, turbo-charged, knockdown, drag-out pub stages. Needless to say, upon receiving the AT2010, I was in a good position to put it through the paces. Audio-Technica describes the AT2010 as follows: “The AT2010 is designed to bring the studio-quality articulation and intelligibility of Audio-Technica’s renowned 20 Series to the stage, for crystal-clear vocal performances. The AT2010 excels wherever articulate vocals are needed…”

“Articulate vocals” and “natural sonic characteristics” are descriptors of the Holy Grail of live performance microphones, a bold claim by Audio-Technica. From the first moment I felt the solid construction in my hand, to the first performance in which I auditioned the mic, I was impressed. Gig number one was a solo acoustic show in a very intimate environment. The crystal clarity I was hearing from my lighter attacks and falsetto actually coaxed a better vocal performance out of me. Gig number two took place in a louder pub environment [where I’d normally use a dynamic mic], in a duo setting, where I pushed my vocals a bit harder. The condenser mic held its own, continuing to allow me more dynamic control in my approach. Gigs three through seven, similar set-ups, same results.

Gig number eight gave the AT2010 its first real challenge…a pub so loud that the ambient sound of the room, with no music playing, averaged 95 dB (peaking at a whopping 100 dB). I had to push my two QSC K12s and KSub much, much harder than the previous shows and feedback from the mic was a tad difficult to mitigate. By the mid-point of the second set, I was forced to relent and break out my Audix OM-5, which is a king at handling high SPLs and resisting feedback. A/B’d with the AT2010, the quality of the OM-5 didn’t sound nearly as good to my ears, but the feedback problem was handled. For low-to-mid volume gigs, the AT2010 is a total home run. I’ve now performed 20 shows since the mic came into my possession and it has become a vital tool and a mainstay in my live performance set-up. You really can’t go wrong with this mic. New facets of nuance will begin to float effortlessly from your instrument. I am indebted to Performer and Audio-Technica for the gift of this quality tool, and can now see how condenser mics stack up on the road vs. the dynamic mics I’ve been used to. They make me sing better.

OWEN HARDMAN (FOH engineer for Zebrahead) on the AT2010

After winning a package of new AT2010s, I hit the road with my usual gig running front-of-house for the band Zebrahead overseas. I’ve been with those guys nearly a decade now and I’ve been through quite a few mics in that time, but I’m never one to turn down the challenge of something new – so I threw the new AT2010’s in my case and headed out for a run of mainland Europe, Russia, Belarus and the Ukraine.

Now, the mics I’m used to and the ones I’m happiest with to date are the Audio-Technica Artist Elite series – namely the 6100/4100s. I’ve been using these things with great results for years and have only ever had to replace one stolen mic; they are bomb proof. They’re a real solid build and they ‘feel good,’ ergonomically speaking, in your hand. I’ve always been able to cut through the mix with these mics and they are great at feedback rejection; you can really get a lot of level through those wedges before they set off. The hyper-cardioid pattern is tight on axis and that helps a bunch.

So, on pulling the 2010 out of the packaging I was pleased to see that the mic had the same appeal in form factor and handling, but also immediately noticed how much lighter than the 6100 it is. I’ve never thought to use condensers on vocals with Zebrahead, partly because I’ve always been happy with the AE stuff, but also because historically the band are pretty damn loud on stage and I’m a little apprehensive to put a condenser in the middle of all that.

It’s going to be difficult to do a direct comparison between these two mics as they are truly different animals with their respective applications. That said, I must comment on the sound of the AT2010 straight away; the folks at Audio-Technica will sell you this mic with the promise of bringing studio quality sound to the stage. The AT2010 does this incredibly well, as I believe much of the same tech has been tweaked from their 20 series studio mics and bundled into this live offering.

It really does not disappoint and one of the things you’ll notice immediately is the improved clarity to be expected from a condenser over a dynamic. The articulation you get from this microphone is superb, and you really start to hear previously hidden dynamics within the vocals (even during loud gigs). They give you plenty of level and where the 6100 makes its point on the harsh side the 2010 brings an added element of warmth to the mix whilst still finding its way through the backline. 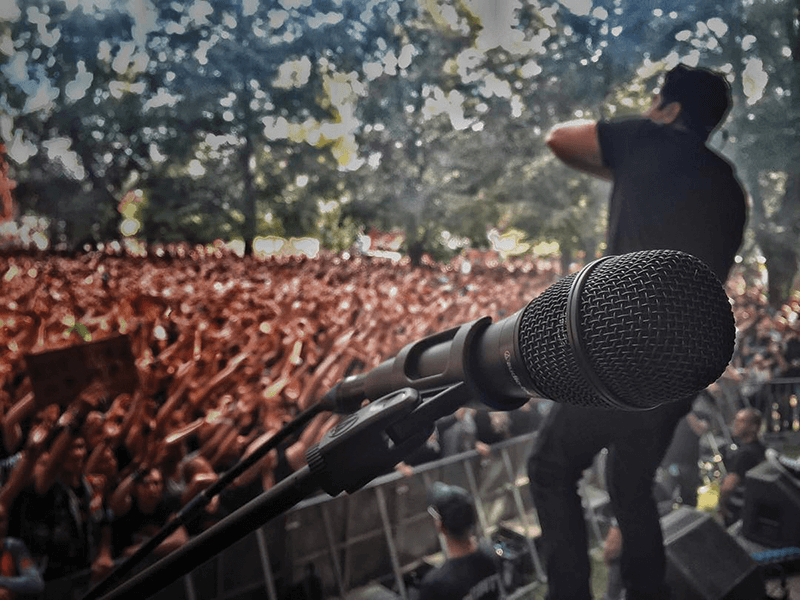 Zebrahead live in Europe with the AT2010 condenser microphones

I must admit I have been spoilt on this last tour with the spaces I’ve been able to use the 2010s in. All the environments have either been larger club sized venues or outdoor festivals, so I’ve had the space and the headroom to open them up. In addition, I’ve also finally convinced Zebrahead to get IEMs, so I have not had that age old problem of battling wedges.

I know for a fact that I can rely on the AE dynamic mics in loud spaces to give me what I need; I’ll reserve full judgment on the 2010 until I’ve really put it through its paces on some smaller noisy club shows…watch this space for that. I know we won these, but I also know how much they retail for ($99 USD) and for the price you are getting a lot of microphone. I would urge any vocalist (or group with multiple vocalists) looking for a great sounding live mic to go and get themselves one (or more) of these.

So I will definitely be using these mics again on our upcoming tour with Skindred – hopefully I’ll be able to push them that little bit harder and see what results we get on some different stages. I’ll have to get back to you on that, but nothing but praise from me up to this point.