Home / Home Recording / Music Production / Recording The Sonic Equivalent of a Bonfire: IN THE STUDIO WITH SHOOK TWINS

Recording The Sonic Equivalent of a Bonfire: IN THE STUDIO WITH SHOOK TWINS

At the time we confirmed our dates at the studio we only had seven songs for a new album.  So I think we had about five months to write four songs – which is quite miraculous for us since it usually takes about six months to write [just] one! It was a bit stressful trying to get those new songs worked out and fully-realized before we brought them into a legit studio like this one. 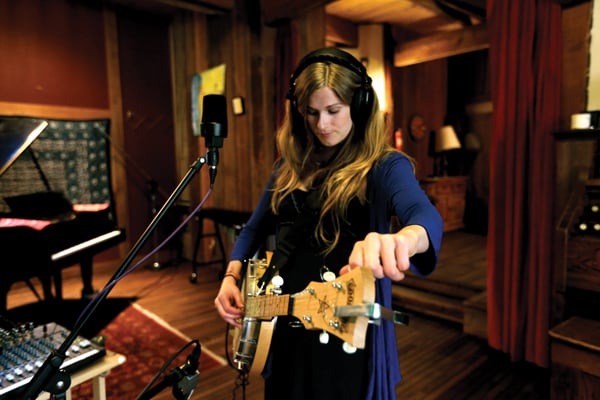 How did you choose Bear Creek Studio?

We wanted this record to sound full and big and rich and as live as possible (like friends around a magical bonfire!) while still being able to play to a click track.  Ryan [Hadlock, producer] helped us achieve this goal fully by having us play the whole song all together in separate rooms, so he could capture the bass and drums. Then he had us overdub all other instruments and vocals in the same big room later, so it really sounds like the fanciest, best and most interesting live performance ever.

Our last record was recorded in a smaller studio, so we had to track everything separately. Also, we didn’t have the band all there at the same time, so we actually started with guitar, banjo and vocals, then added bass and all the other percussion and fancy instrumentation on top.  We didn’t even record all the instruments in the same studio, so it was hard to make it sound [cohesive].

We got to use some of the studio’s amazing and expensive mics, which gives each song a great texture.  And the studio is filled with rad pedals, amps, guitars and keyboards that definitely made their way into the recordings, as well.  Laurie and Katelyn (the Twins) recorded their vocals at the same time in the same room (separate mics, but facing toward each other) and this was a unique thing for Ryan to do, but he said the Twins’ voices were so similar and they blended so well that it was actually easier for him to do that way. Live, full-band takes are for the bands that have played their songs the same way with the same people hundreds of times. And we wished we could have done it that way, because it’s so real, but our band fluctuates anywhere from 3-6 people on stage, so we couldn’t really nail a live take, unless we played it over and over all day long in the studio, which didn’t make sense…

We’re pretty sure the frogs from the little Bear Creek that runs behind the studio are gonna make it on the album. If they sign the release, that is…

A lot of really magical sounding layers with the violin and the electric guitar. It sounds so beautiful and we’ll have to get some looping and delay pedals to achieve that live.

The only thing that was difficult was getting the Golden Egg [shaker] to sound just right.

We laughed pretty much the whole time. We always do! And we watched the entire series of Arrested Development over the course of our studio sessions. So those AD quotes will always remind us of Bear Creek. “Her?”

Most of the band stuck around for the mixing.  It was a great process; we all just hung out around the studio while Ryan mixed on his analog board for a few hours in the control room. When he had a mix he was satisfied with, he would call us in for a group listen. Most times he hit it right on the nose and did it exactly how we would have if we had those techie skills. It seems the vision is unanimous; mastering will come later, and we are unsure who we will use at this time. We’re going to sit on it for a little while.  Ryan and our manager, Phil, will shop it to various labels to see if someone else shares the vision in all the right ways.

We are definitely going to press it to vinyl (with a digital download included) as well as on CD.