Home / Home Recording / Music Production / In the Studio with Plumerai

In the Studio with Plumerai

We initially wrote a handful of song ideas and then developed them on home demos before our spring tour.  Out of those demos, four songs arose and we started banging them out.  When the songs were complete, we added them to our live set and road-tested them. After that, we came back to Boston and holed up in a rehearsal spot to tweak and bang out any issues. We basically knew exactly what we wanted to accomplish before stepping foot into the studio and were able to streamline the production more efficiently as a result. We knew that we wanted to record to tape. Martin and James recorded analog to digital on a side project at a studio out in Brooklyn a few years ago and loved the warmth and feel of the drums from that session.  They felt it would translate well to the songs that Plumerai were writing. While we were aware of studios with the capability of recording to tape, they were more traditional Pro Tools studios that just happened to acquire a tape deck and patched it in to their digital setups. So through the power of Google, we did a bit of research and discovered Mystic Valley Studios out in Medford.  The thought of 100% analog production seemed to be exactly what we wanted and at a reasonable day rate.  Besides that, the songs were a bit more ’80s influenced, like The Cure’s Seventeen Seconds or The Stone Roses, so why not also use equipment from the same era?

We wanted a more concise and warmer sound than our previous records, which were more ambient and dense. Basically, we wanted a record that sounded alive. We accomplished this through the warmth of an analog recording on 2″ tape and used plenty of retro gear to compliment it.

Unlike a lot of engineers, Alex [Garcia-Rivera] mic’d the bass instead of running direct, so we were able to make full use of our Maganatone MP4 tube bass head running through an Ampeg cab and got a really punchy, warm bass tone and not just a dull tone to be tweaked during mixing. After recording digitally for so long, the tape and studio turns out to be an instrument itself.  The sound of the raw drums on tape were already fantastic.  In addition, we also made use of the studio’s stock of retro pedals in combination with our own tube preamps so that there wouldn’t be a disconnect or barrier wedged between the sounds of the rhythm section and the guitars.

During our last sessions, we were on a learning curve. It was our first record with Eliza and Mickey and our songwriting was still in a developmental stage.  You can tell by the variation between the song styles, that we were still trying to discover who we were.   With this record, we’ve figured out who we were as a band and set out to write songs that represented this. We always appreciate the live, full-band takes.  Something always feels special about being able to capture a great performance together. However, we’re a bit nit-picky when it comes down to the recording because we know that the slightly off-time guitar or the out-of-tune bass is detrimental to the recording.  So we basically try to capture the one great drum take, without compiling it from various takes and then go back and touch up the guitars and bass as needed.  Sometimes that’s full takes and sometimes it’s just a punch-in on the chorus.

As a four-piece, there are definitely challenges to playing the songs live they way we intend them to sound.  So in the studio, we’re able to overcome those limitations without requiring another band member. We can also use a wider palette of sounds within one song. Whereas playing live, we have to decide which is the most important part and we have to consider things such as if we play the melody line, will the bottom drop out of the song and sound empty?  Vocally, at our level, the studio allows Eliza to sing at a comfortable level without being overpowered by the amps and drums…so she has more flexibility.

Deciding on the one good take was tough. Sometimes, you feel like you nailed it but listening back you realize it wasn’t as great as it was in the moment. As a result, that initial tracking session was tough to decide which version of the song was The One we should develop into the completed recording.

Most of our hilarious band experiences are the result of a language barrier between our French vocalist and her American bandmates.

The mixing we handled in-house at Mystic Valley.  We definitely wanted to keep it analog and mix down to a reel.  We also didn’t want to get in the situation of dumping the tracks into Pro Tools to mix.  With analog studios being somewhat of a rarity, we decided to stay with Mystic Valley so we could be there for the process, and because the Alex proved to be an asset – so why not keep with a good thing? 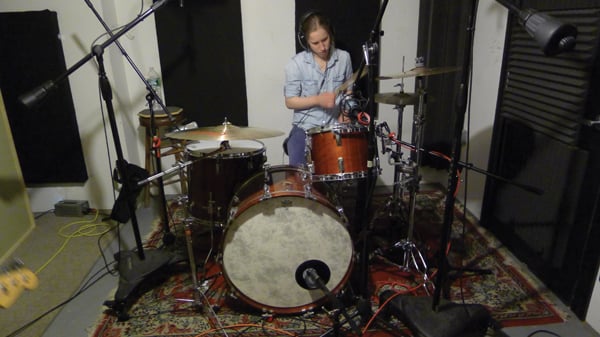 We’re definitely planning to release an EP this fall on vinyl and of course it’ll be available digitally on iTunes, Bandcamp and Amazon for our friends and fans without record players (and for our overseas fans who can’t afford the significantly increased U.S. Postal rates).

We’re going to handprint the covers with a GOCCO Print Kit.  We did this on our Marco Polo EP a couple years ago with amazing results.