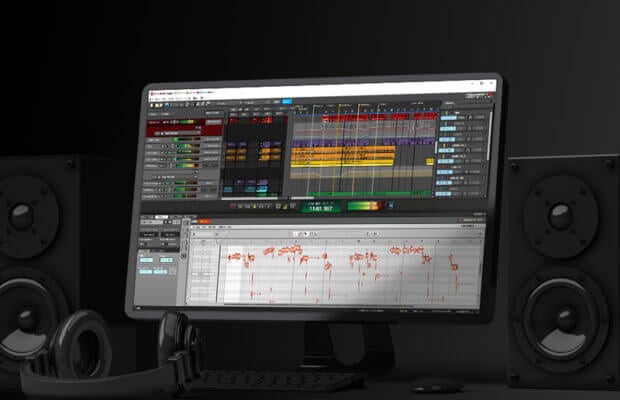 Performer reviews the Mixcraft 8 Pro Studio software from Acoustica. How did we like the low-cost Windows-based DAW, and how does it improve upon version 7? Read our full analysis below.

When we first checked out Mixcraft [read our review of version 7 here], the Windows-only DAW built primarily for the home recording market, we were pretty impressed with not only how easy it was to get setup, but also the powerful features that came bundled at the ridiculously low price point. After about two years on the market with version 7, Acoustica has released Mixcraft 8 [compare versions and buy now], available in two versions: Recording Studio for the home/bedroom user and Pro Studio for the more demanding, pro-level user. Both packages offer up a ridiculously tantalizing set of features, and at such low prices that for most people reading this, it probably makes sense just to go for the Pro Studio bundle since it’s just too good a deal to pass up.

So, what’s new? Well, lots, but here are some of the things that Acoustica has made special note of, and that we think are worth touching upon. For starters, the interface is very similar to previous versions (and let’s face it, to many DAWs you may have used), which is not a bad thing at all. You want new users to jump right in and feel that the program is intuitive. But there are some little tweaks along the way in version 8’s UI that just make it feel a bit more modern (and not so 2010). Light and dark themes are a nice touch here.

In addition, you’ve got support for VST3, which means Mixcraft 8 can keep up with your latest virtual instruments and plug-ins. But more importantly, it seems like the entire sound engine has been improved upon in the latest incarnation. What’s even better, and if you know us, you know why we love this, is that you’ve now got integrated support for Melodyne. We absolutely freakin’ love Melodyne, and the tight, seamless integration with Mixcraft 8 is a fantastic addition to version 8. Recording automation seems a bit easier this time around, and there appears to be more support in general for automated recording. Personally, I like that because panning and volume changes during a mix are something I don’t want to sit there and do by hand all the time, or try to fiddle with a control surface to get right. I’m the kind of person who likes to do it once and save for future use.

Additional bonus points go to the newly included synths (we’re totally into the Moog-like VI on-board in version 8) as well as some handy mastering tools (some of which come courtesy of industry leaders iZotope). All in all, Mixcraft 8 is a worthy update to a product we already heartily recommend for users on a budget who don’t want to sacrifice features in order to meet a price point. In fact, at under $100 and $200 (depending on which version you choose), we daresay this is one of the best values in the industry.

The only slight bummer, still, is that it designed to run on Windows. The folks at Acoustica tells us it works great on Macs running Bootcamp. But it would be great if Acoustica could also look into a Mac-native version, as well. If Cakewalk can do it (and they’ve held out for how many years now?!?), then it’s worth investigating. That’s all we’re saying. inexpensive DAW offers up a huge feature set for home recorders in an easy-to-use suite.