How often does this happen to you? You have a killer song idea, maybe just a snippet of a melody, and it’s been kicking around in your head long enough now to where you feel you must record it somewhere.  So, what do you do?

Do you open up Pro Tools or Logic? Maybe, but the snippet’s not really ready to be a track yet with set tempos and such.

Evernote? Sure, sometimes, but mostly for the lyrics; the audio save functions are so clunky.

Have you ever done the Quicktime Audio trick? But that was impossible when you were away from a computer, I needed to be able to record a clip at anytime, anywhere.  Shoot, I’m old enough to remember the days of having a mini-cassette recorder on me, or on my nightstand, to capture those moments instantly. And if you are wondering how well that worked, well I have about 150 cassettes of ideas that are damn near impossible to port into a digital files, so…basically a useless but fun memory.

For me, the answer for the past few years has been Voice Memo on the iPhone. In fact, many producers and songwriters I work with do this. It’s quick, mobile, and records fairly good quality for these purposes. This works, but I can’t tell you how many frustrated times I’ve seen “New Recording 8.” 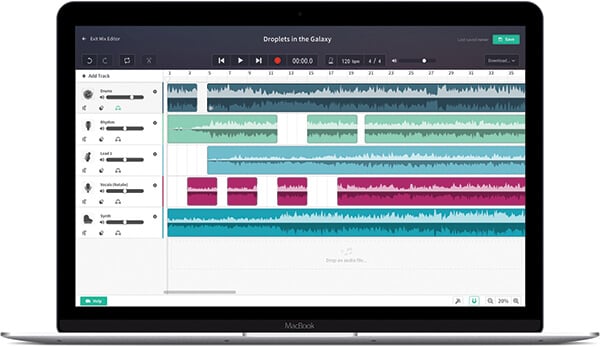 In all of these cases, there are major limitations.  First, simply categorizing and being able to archive or get these notes on computer has always been hell. For instance, you can record audio but can’t attach the lyric notes to the audio recording. Or on the flip side, you have tons of lyric notes hanging around, but no correlating audio.

Second, if you are co-writing or collaborating, it becomes even more difficult to share notes in the same way you can share sessions or tracks in a pro-audio environment. With the switch to 64-bit, there is even more friction between DAWs and plug-in stacks.

Introducing BandLab, the first cloud-based platform (iOS, Android, and Desktop) where musicians can capture their ideas and create/produce new songs with anyone, anywhere in the world.

BandLab focuses on three areas; let’s break them down.

It all starts with Idea Capture. This is where you can sing that little melody, make a few lyric notes, and store that sucker to work on for later. BandLab’s interface on web and mobile makes it very easy and intuitive to record, wipe, and record again, until you like it. You can even save multiple “takes” because BandLab offers unlimited storage; no exceptions.

After you have an idea captured, you go to the Mix Editor. This is somewhat of an amazing feature. You can really arrange, mix and tweak until your heart is content here.

The UI is very intuitive if you’ve ever used a multi-track DAW or software music editor. Additionally, you do not need to “sing” an idea capture, you can simply upload recordings, say a bass line, acoustic track, or beat, directly into the Mix Editor which accepts mp3, .wav, and .aac files. And you will find some limited loops and instrument pads here, as well. As the Mix Editor is on a platform, you can invite others to co-produce or add to tracks in the same environment. This can be very useful for song collaborations, especially in the pre-production phase.

And like seemingly every freaking startup, BandLab has introduced a way for community sharing. It’s called “Forking,” and it’s basically a way for other musicians, or even fans, to add to or create their own versions of your creations. You can have multiple people, strangers even, adding to “works in progress,” or by invite only to un-released tracks. Normally I am not a fan of this, and I’m sure many of you who have written a song with more than one or two people probably feel the same way. Let me just put my music publisher/licensor hat on for a quick sec. Please, please, please, get split sheets on all of these. Make sure all of those who are involved have signed off on exact publishing and writing shares. OK, rant finished.

My qualms aside, I can see how it’d be a cool way for your band or project to activate fan participation. It’s fairly easy to share the link to your mix, so it’d be easy to do a contest involving this platform, centered around your latest single or a song you are working on.

So, go try it at BandLab.com for yourself. It’s free to use, there is unlimited storage, and all features are available to everyone from signup. I think it can be a great tool to capture those ideas that great songs eventually come from.