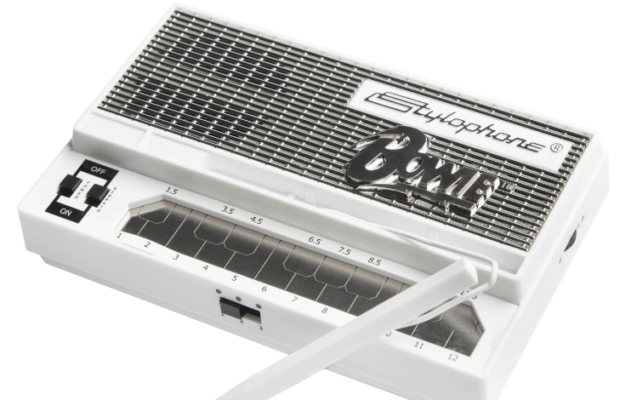 As much as we love David Bowie, and Bowie collectables, you could imagine our excitement when the Bowie Stylophone was sent to us for review.

Bowie famously used one of these kitschy synths on his 1969 record ‘Space Oddity,’ and to date, that’s really been the only claim to fame the Stylophone has had (other than the odd Kraftwerk single). Perhaps for good reason.

Truth be told, it’s really just a cheap plastic toy, not a serious synthesizer. Yes, it does make sounds, technically, but they aren’t pleasant or even easy to trigger. You’re forced to use a stylus to press down on a conductive membrane in order to play notes, all of which only generate the same style of sustained beep, and most of the time when you press down it either buzzes or doesn’t sound at all unless you apply just the perfect amount of pressure. Trying to jump between notes hardly ever has the desired effect, so you’re forced to do clunky glissandos in order to move intervals.

In short, it just doesn’t work all that well (or sound all that good).

And it’s not just limited to the Bowie-branded version. They’ve never really worked that well or produced any sounds that would inspire a new song part. Perhaps that’s why they don’t show up on many records. Honestly, we can’t imagine any scenario where a musician would write a part for a song using one of these without giving up due to frustration. It’s a gimmicky collectable, when you get down to it. As far as features go, you do get some pitch adjustment, vibrato, and octave select switches. But if you really, truly, must have that Stylophone sound, you might be better off programming an emulator using a MIDI controller.

Sorry, we wanted to like this, but we’ve gotta be honest. We can’t give it our full recommendation, unfortunately.