There are A LOT of small batch pedal builders out there, some making very complicated and over-the-top devices. It takes a lot to be unique, and simple at the same time. The new Coppersound Telegraph Stutter pedal is one of those items.

Technically, it’s not a pedal – it’s more of an outboard, manual kill switch. Yes, it uses the standard format of a pedal, and 1/4” connections. But sitting on top of a standard pedal enclosure is an old-timey telegraph switch, like you see in old war movies where transmissions were done by Morse code. The plastic finger plate doesn’t look like it could take the abuse, and Coppersound warns against using it with a foot. It’s meant to be used with a hand. Place it in a signal chain between an instrument and an amp, and pressing down on it kills the signal. There is a neat reversal switch that kills the signal, and pressing it engages the signal. It’s completely passive, meaning no power is needed. There are also a couple of adjustable set screws to control the travel of the finger plate, as well as its springiness.

It’s like a manual tremolo, just play along, and with a free hand, tap away! It’s kind of like how Les Paul players have done the stutter effect with their toggle switch, only there’s no chance of damaging the guitar’s switch. With a lot of gain, a fretting hand can easily press hard enough to get a note or chord to ring out, while the picking hand can operate the telegraph. The best placement is just before an amplifier, and after a pedalboard, killing the entire signal when depressed, however placing it before a delay unit can really make it do some wild things, like having a delay trail off, while killing the source signal. 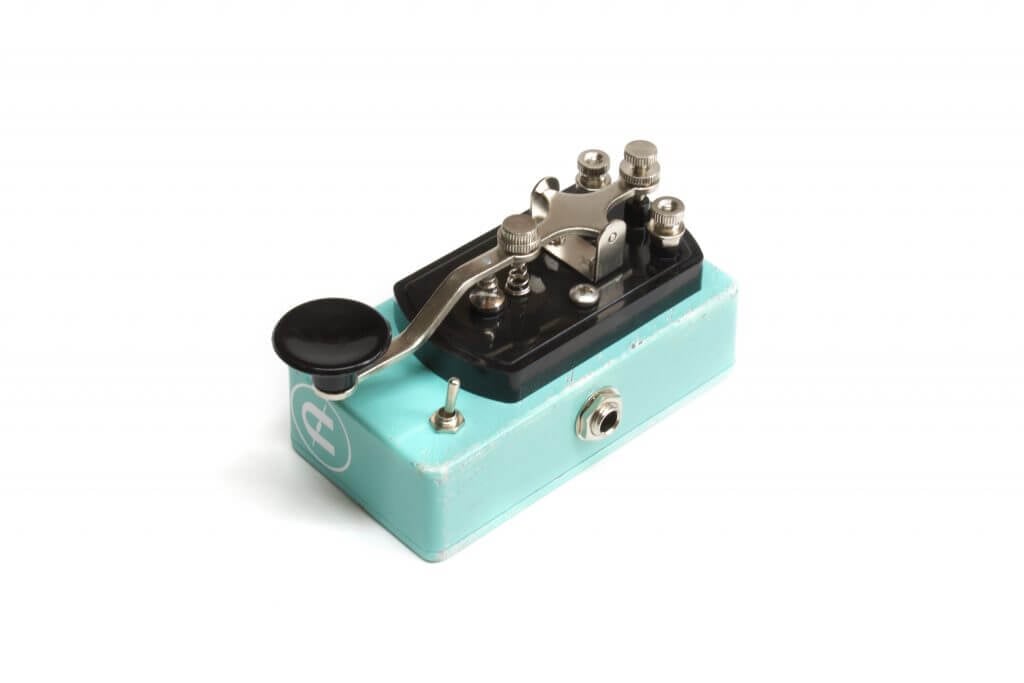 In the studio, cutting and slicing guitar parts like this could be tedious, but the ability to sync the pattern with a drummer, or against a rhythm can really open up some interesting sounds. Noise-rock bands that use echoes and feedback might like this as a way of carving up their signal. It opens up some interesting options for keyboard players too, giving synths the ability to get manually choppy and glitchy, without having to adjust tempos or any parameters in a DAW.

Now yes, there are some pedals already out there with footswitches that do the same thing, so why get a device that is kind of a pedal, but one you shouldn’t stomp on? Well, a non-fretting hand can often be more tied in rhythmically with the fretted hand, as opposed to a foot. It’s really an expressive tool that, while only having two modes of operation, can yield a variety of creative approaches.

The only downside is where to place this physically in a live rig; on top of an amp is best, but depending on where the amp is on stage, this might not be optimal, in relation to a pedalboard, or a microphone stand. A good option might be one of those trays that clamp on a mic stand, or even a smartphone/tablet clip holder.

might take some thinking to find a spot to keep it “handy” during live use.