Changing several pedals at once has gone from a tap dance routine, to a single button with the new Boss ES-5 Effects Switching System, but there’s a lot more it has going for it. It’s got five fx loops, a tuner out, external controls (for an amp’s channel switching, for example), expression pedal output, as well as MIDI connections. Each loop can also be set for buffered, or true bypass.

Our test pedal chain included a Boss Blues Driver, Boss Chorus, MXR Micro Flanger, EarthQuaker Night Wire Tremolo, and an Eventide H9 MAX, while our test amp was a Peavey Classic 50 2×12. The order of the loop in the signal chain is assignable to each patch, so there’s no need to put the pedals in any particular order. Putting the chorus before the tremolo, for one song, might sound better, but in another song, it might sound better after the tremolo. Setting up a patch with the Chorus and Blues Driver on was very simple, as well as any other combination of pedals we could imagine. The patches can be named, too, which is great; a song name is a great way to keep track of these settings. With the H9 Max connected to the MIDI ports, the ES-5 can change the presets on the H9, as well as place the H9 Max in the proper effect order for the particular sound. Nice! 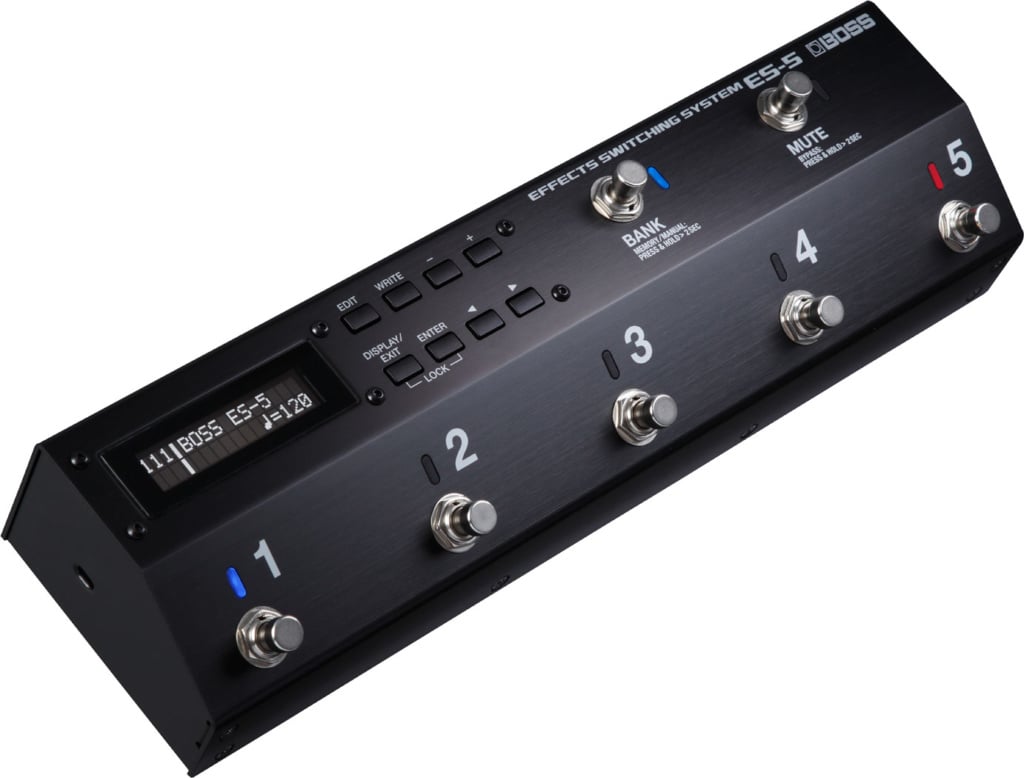 There’s also the ability to sync tap tempos either via MIDI, or even if there’s a Boss pedal like a DD7 that has an external 1/4” connection, it can be engaged through the ES-5. There’s also a parallel loop connection, for running multiple loops at the same time. A chorus and delay at the same time, for example, can really create some new sonic textures that are made simple with the ES-5. Jim Bybee of BOSS explains further:

“The parallel function is basically a simple internal mixer that allows you to run effect loop paths side-by-side (parallel) instead of sequentially (serial). Also, the same internal mixer is also used for the carryover function. When used with a delay pedal for example, this allows the sound to carryover (delay trails not cut off) when switching patches.”

There’s also a momentary feature: engaging a reverb or delay, for instance, for the end of a solo for just that last note. Press down and hold on that loop’s switch and it’s there. Release the switch, and it’s gone. Very easy.

The ES-5 turns any amp and pedalboard into one cohesive unit, with the added ability to connect it to an amp’s channel switching or any other footswitch that uses a standard 1/4″ TRS connection. Going from the Blues Driver with the H9 with a delay, with the amp on clean with no reverb, to the lead sound of the Peavey, reverb off, with the chorus on, was done in the touch of one button. It may sound confusing, but it really makes things much simpler. Tap dancing across a pedalboard has now become a thing of the past.

MINOR QUIBBLES OUT THE WINDOW

There was initially one minor quibble we had on the unit: looking down, the buttons on the pedal run from left to right, loops 1-5. On the back panel the inputs run 5-1. The interface does the same. We thought it might confuse things a bit, wondering why loop 1 isn’t on the same side as switch 1. For an explanation, we again turned to Jim Bybee:

“In application, this may not be such a big ‘con’ in most cases, [and] this design is actually in line with typical advanced switchers of this type. The loop switchers that have jacks and correlating switches right next to each other are passive switchers, which are simple on/off devices. Since the ES-5 offers advanced functionality like patch programming, freely assignable loop order and footswitches, etc., there’s no need for this (similar to our larger ES-8). Assuming the loops are used in sequential order (the default), the rear panel jacks provide left-to-right signal flow, from guitar in to final output. But the display order was designed to mirror the physical jack order, so the signal flow goes right-to-left to match. So, in a virtual sense, the display is providing the one-to-one correlation you’re asking for. (But of course, since you can change the loop order at will, this can go out the window in a hurry!) Since the unit’s footswitches can have multiple different functions, (switching patches, switching loops on/off, tap tempo, etc.), there doesn’t necessarily need to be any linear correlation with the rear loops. If the user wants to, there are some easy workarounds—if you want to always use the switches for on/off duty, you can simply re-label them (label-maker, tape) to match the rear jack order. Some people may also choose to label pedals to identify which is used in a particular loop.”

With a street price of $399, the ES-5 can give players looking to really get everything out of their pedalboard and amp rig the ability to take things to a whole new level with minimal fuss. For stage use, we can’t recommend it highly enough.