How to Partner With Local Breweries on Your Next Album Release

The Lights Out + Aeronaut team up to release the first ever album on a can of beer. Learn more about the process, and how YOUR band can partner with local breweries on album promotions.

If your band is like mine, beer is your hazy golden muse.

There’s a whole corner of your rehearsal space with empties piled so high, your old drummer might be living under them. When you see Iron Maiden Trooper, Motörhead Bastards Lager or Queen Bohemian Lager at the beer store, you might wish your band was famous enough to have its own brew.

But fame no longer has anything to do with it. With more than 4,700 breweries in the U.S., the beer business is exploding as quickly as the music industry seems to be shrinking.

There are probably a few independent breweries in your city, each out to make a name for themselves, like your band. Maybe there’s one whose attitude and approach to their craft meshes with yours. When my band The Lights Out was finishing T.R.I.P., our album about traveling through the multiverse, we approached a nearby brewery called Aeronaut, which was founded by scientists from Cornell and MIT. We chatted about brewing a beer inspired by our music, and releasing the new album on the can. They loved the idea, approached it like a science project and created a beer that could serve as liquid sustenance for a pan-dimensional traveler. T.R.I.P. became a unified concept: a beer to fuel a drinker’s trip through the multiverse, and an album as the soundtrack to that journey. The Lights Out performing live

GIVE IT TIME TO AGE

It takes time for a brewery to prototype, brew, can and design artwork for a new beer. Try to work at least one season ahead of when you hope to release the album. The Lights Out approached Aeronaut five months before the release, and even that was cutting it close.

HANDS OFF THEIR CANS

Shopping your album to a brewery instead of a record label means the brewery isn’t going to tell you what kind of music to write. Return the favor by not telling them what kind of beer to make. When we brought a rough cut of T.R.I.P. to Aeronaut, they asked what beer style we were considering. We suggested they brew whatever the album inspired them to create. Allow everyone to focus on what they do best, and trust each other to get it right.

Your first instinct might be to include a download code or URL on the beer label. But you can do better than that, by making album retrieval on-theme and generate online exposure. Print a social media call-to-action, where the drinker needs to post a specific hashtag to access the music. We used an app called OOOTwitter, originally designed as a Twitter out-of-office auto-responder. When a drinker tweeted a special hashtag to @thelightsout, we automatically responded with a message telling them what an alternate reflection of themselves was doing right now in a parallel reality, and a link to the album. The Lights Out + Aeronaut: T.R.I.P. Album

When you release music on something edible, it opens the door to food editors, in addition to the usual music editors. Food and beer writers spend their days interviewing chefs and brewers. The opportunity to interview a band gives them something new to chew on. They’re also less guided by personal preferences for specific music genres.

RAISE YOUR GLASSES TOGETHER

New albums are released every day. So are new beers. Jointly launching an album and a beer at the same time throws two separate worlds into the mash and draws on both audiences. When we released T.R.I.P. at a climbing gym called Brooklyn Boulders, music fans, hopheads and rock climbers all came together to hear a new album performed, see our wearable light show, taste a new beer and scale darkened walls wearing headlamps. It was an immersive sensory experience with sound, light, flavor and touch. 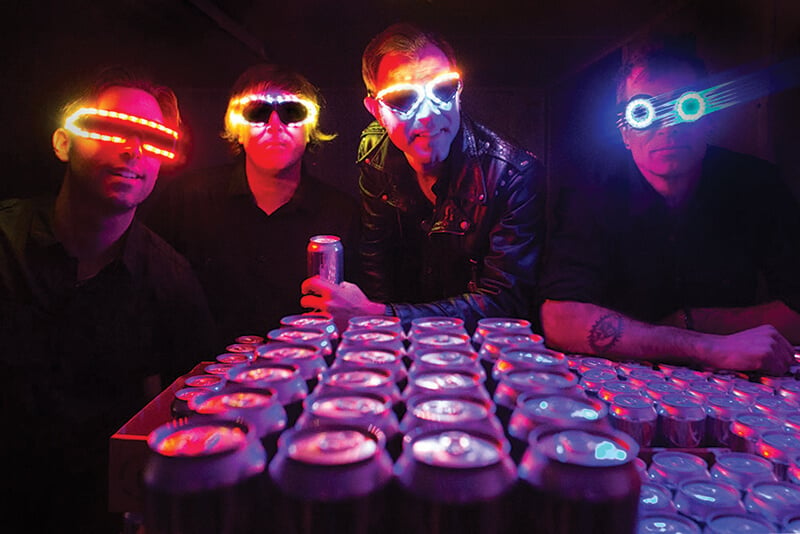 When a band/brewery partnership is done right, the band and brewery are exposed to each other’s fans, and the fans happily stumble home with their ears ringing.

Hey y’all, Ben Ricci here from Performer Magazine, butting in and the end of the article with a quick take on the actual album that’s been discussed. Now, of course, releasing your album on a can of beer is a pretty cool (and unique) way to cross-promote your music. But it doesn’t make a lick of difference if the music is no good. And I’m here to tell you, this album flat-out rules. From the opening title track, with echoes of Celtic punk (believe it or not), its Real McKenzies vibe is a killer way to jump-start an infectious, rocking good LP (or, beer can, as it were). The drums, bass and saturated guitars are in lock-step from the drop, and the pounding, driving rhythm is a great way to get in the groove. Sing-along choruses (Layin’ Down The Law) and bouncy, accusatory pop tracks (Lies) make for a great mix. One of the greatest sins an album can commit is being boring, and T.R.I.P. keeps you on your toes (without feeling manic or non-cohesive). Give the record a listen (and a sip) at https://thelightsout.bandcamp.com or on a beer can near you!

Adam Ritchie is the guitarist for The Lights Out and the owner of Aritchbrand. Hear his band at thelightsout.com and see his marketing work at aritchbrand.com.