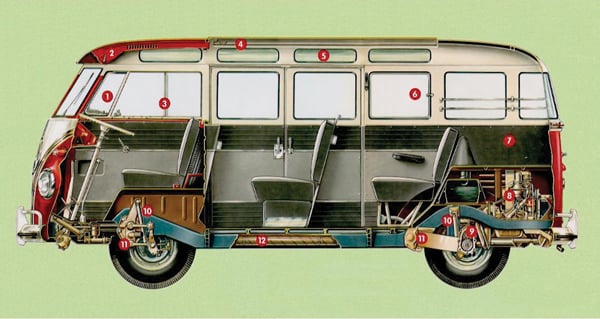 Inside the VW bus

1. Be energetic on stage, sure, but don’t take foolish risks.

That means your lead singer should probably not be swinging from the rafters like it’s a 1991 Pearl Jam video, even thought that’s totally rock n roll and badass. Injuries mean dollars, and the venue is probably going to be furious if you hurt yourselves on their stage. You’ll be in for nothing but trouble trying to land future gigs, and don’t be surprised if word travels and other gigs you’ve already booked get cancelled on you. 2. Be even more careful with those you invite on stage, and especially crowd interactions.

Worse than hurting yourself is hurting others. So think twice about inviting any non-band members or non-venue personnel on stage during your performance. If they slip and fall because of your negligence and/or your encouragement to stage dive leads to injury, guess who’s going to have the finger of blame pointed at them? That’s not only a terrible blow for you legally and financially, but think of the public image hit you take if you’re associated with contributing to a fan’s injury. No one wants that, so be smart up there. Interact with the crowd, but maybe keep it to a verbal thing, yeah? [To further clarify, K&K states “the general liability policy is to protect [entertainers] from injuries and damage to ‘other people and/or their property.’ Any reference we (Performer) make to injury to the performer  wouldn’t be covered by a typical policy. Something to be aware of]

To put it bluntly, venues don’t like damage. So if you or your road crew has, how shall we say, pre-gamed with a few adult beverages? You might be setting yourself up for a property damage claim. Load in safely (and soberly), and that might mean investing in some casters or dollies for amps, wedge monitors, PA speakers, drums and large cabs that might otherwise be awkward to carry. New York Case Company is our go-to recommendation for high-quality, road-worthy cases that will not only keep your gear intact, but also help your crew load it in without banging up walls, floors and entranceways. Hatfield notes, “If a venue claims you damaged their floor loading in, your liability coverage will cover claims within the limits of the policy.” But let’s not allow it to get to that point, shall we?

If you’re playing a show with multiple bands, make sure you or someone associated with your act keeps a good eye on your gear, both while you’re on stage and while you’re off. The last thing you want is a dangerous, loose cable tripping someone up and causing them harm while you play. Or a poorly leaned/stacked amp, speakers or drums tipping over and crushing some poor concertgoer’s foot. Set up your gear safely, store unused gear backstage or securely in your tour vehicle (with someone guarding it while you’re performing), and keep all cables tightly run, coiled and/or out of common footpaths. The venue or festival stage manager should be able and very willing to help with cable management. [Further clarification from our friends at K&K reminds us that “the Liability policy doesn’t cover damage to the entertainer’s stuff…only other people’s stuff that isn’t in their care, custody or control. An important distinction to keep in mind out there.]

5. Duct tape is NOT a miracle cure for electrical issues.

We’ve seen far too many power cables coming off bass and guitar amps that have been MacGyver’ed with all sorts of electrical tape and duct tape to keep the leads intact. You’re just asking for trouble with these quick fixes, especially when you see the wall outlets start smoking in the club (and it’s not just your music that’s on fire). Get electrical issues in your components repaired by reputable technicians. Just because duct tape can hold the cord together for a few more gigs, doesn’t mean it should. Because guess who’s gonna be held liable when the club gets the big bill from their electrician? Yep, you. We asked Hatfield again, and she recommends this: “When choosing an insurance provider, always ask about the financial stability of the carrier; a high rating (A or better) by an independent rating company such as A.M. Best Company is the safest choice.  Also, choosing a carrier that is ‘admitted’ (licensed) is preferable because choosing an insurance company that is non-admitted (called surplus lines) may require you to pay extra fees or taxes.”

She concludes, “Of course, experience is also a factor.  Organizations familiar with the unique risks associated with the entertainment industry will be able to accurately price coverage and more importantly, provide prompt and reliable claims handling and resolution services.  You may also want to look for convenient services such as the ability to apply and purchase coverage online, as opposed to completing a paper application that must be mailed and approved before coverage is in force.”