How to Mix Live Sound How do the Yamaha HPH-MT8 Studio Monitor Headphones stack up against their lower-priced MT5 lineup mates? Last month we reviewed out the $99 HPH-MT5 headphones from Yamaha, and at that price point, were pretty... The Yamaha HPH-MT5 Studio Monitor Headphones have earned our editor’s pick as the... 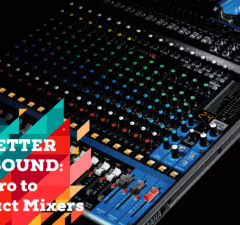 [VIDEO] Get Better Sound: An Intro to Live Mixers

We’ve put together a short video to supplement our recent 4-Part series... Looking for some tips to elevate your stage sound, or even make your... Welcome to the fourth and final installment in our series on how...