Quick Recap: The Used at Boston’s House of Blues At Santa Ana’s The Observatory Orange County earlier this month

The Bert McCracken that appeared before us in 2002 fronting a band called The Used possessed a formal restlessness that ironically was his greatest asset and biggest flaw. When the consistently disheveled and often emaciated vocalist unleashed their self-titled debut album that same year, listeners quickly realized it was the most twisted alt rock party they’ve ever been to. McCracken’s rough edged vocals were sandwiched between massive drums and grinder guitar riffs; lyrics bordered on being either sentimental or straight up irascible. Later efforts by The Used (with the exception of In Love and Death) were never entirely accepted by even the most devoted fans. But as the foursome dusted off their collection of brassy manifestos for a Boston audience, they were as ornery and openhearted as ever.

The throaty “Maybe Memories” served as an anticipated opener and exacerbated the kind of energy that warranted sheer awe. In Love and Death cuts “Take It Away,” “Listening,” “I Caught Fire” and “All That I’ve Got” were received with undivided attentiveness. Other familiar favorites like “The Taste of Ink,” “A Box Full of Sharp Objects” and “Pretty Handsome Awkward” were ripe with elastic rhythms and the kind of swirling guitar that is elusive when experienced live. The most refreshing part of the evening was McCracken’s collective resilience that still stands in all of its glory nearly two decades after The Used had formed. 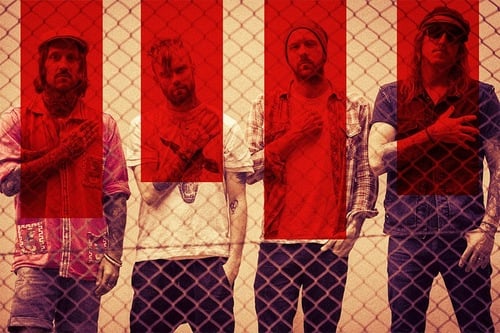 “Revolution” wasn’t just a song from their latest album Imaginary Enemy released last year—it is a notion that resonated so deeply with the band that it spiraled into a Rage Against The Machine tribute toward the end of their set. McCracken’s furious panting coupled with defiant guitar snarls made onlookers crawl out of their skin and straight into the mosh pit (a mere side effect of premeditated madness). Attempts at musical worldliness can often feel like stylistic tourism. But as The Used seeped into riot-ready classics like “Killing in the Name” and “Bulls on Parade,” it was clear that their brief venture paid off: they ignited a little vexation in all of us.