I first fell in love with Beach Slang two years ago during their CMJ Music Marathon showcase; I blindly stumbled into their set while hopping around the streets of Brooklyn in search of a band to hold my attention for longer than 30 seconds. That’s exactly what Beach Slang did and what surprised me more than their energy was the reception they received from fellow festival goers. As frontman James Alex writhed on his knees screaming out some of his most poignant lyrics to date (“You are how The Smiths sound when they’re falling in love” being my absolute favorite), fans were serving his passion and intensity right back to him in the form of luminous howling and garbled lines. Beach Slang’s sound is magnificently wayward and Alex’s punk rock instincts are most lethal when they are fully realized.

Their 2014 EPs Cheap Thrills on a Dead End Street and Who Would Want Anything So Broken? excelled at sublime soundscapes while their debut album that was released the following year (The Things We Do To Find People Who Feel Like Us) was a daring extension of their punk pop reverie. Their last few shows that I saw–both last year–weren’t necessarily lackluster but insanely bordered on the edge of chaos. While Beach Slang trudged through their set list, it was shaky at best and overindulgent at worst. Alex drunkenly fumbled through songs; he also forgot lyrics and told incoherent stories as everyone in attendance looked on in shock and disbelief. On the heels of vicious breakup rumors instigated by Alex himself last month during a show in Utah, it would seem that Beach Slang were on their last proverbial leg. But this past Thursday, the Philadelphia natives brought their taut turbulence to The Sinclair in Boston for a performance that was less about boozing then it was reeling in pensive prog-rock romanticism. 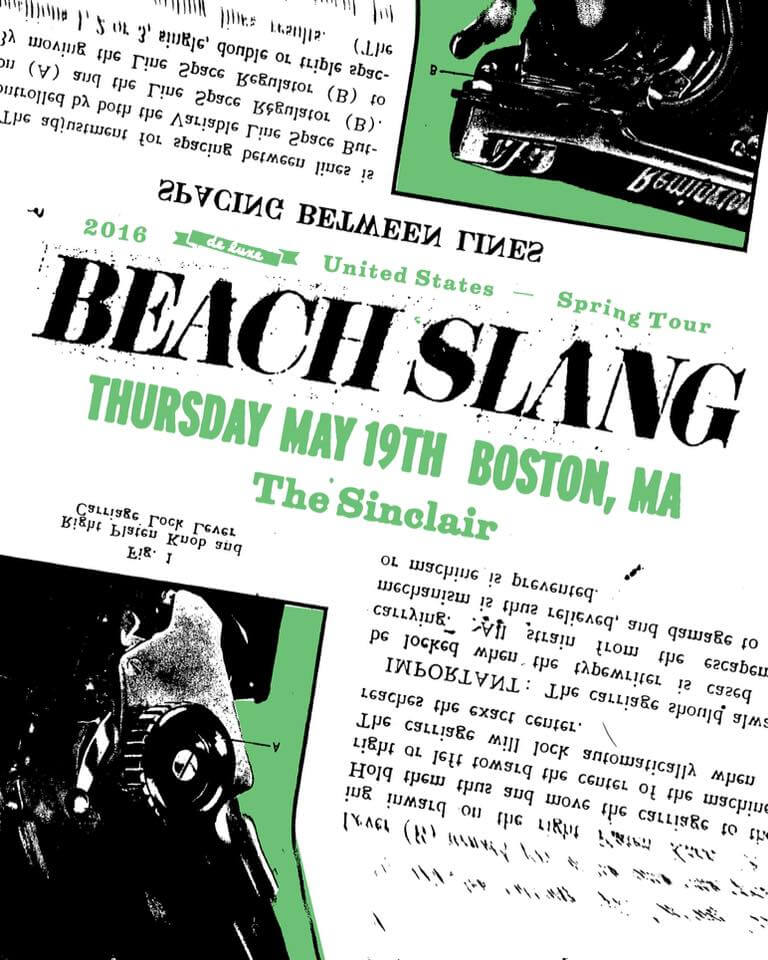 “Hey, we’re Beach Slang and we’re here to punch you right in the heart,” Alex casually declared during the beginning of their set. Songs like “Ride The Wild Haze,” “All Fuzzed Out,” and “Dirty Cigarettes” evoked an elusive evanescence but weren’t the highlights of the evening–the cover songs that they chose to execute were. The band left no musical stone unturned and nothing was off limits. Everything from The Replacements’ “Can’t Hardly Wait” to Nirvana’s “Territorial Pissings” to Rick Springfield’s “Jessie’s Girl” was less about escape than exploration. Although this wasn’t the breakthrough performance I witnessed in 2014 at CMJ, it was definitely way more gratifying and jovial than I anticipated. Maybe it had something to do with Alex’s latest change of vice? “I’m a vodka fellow these days,” he remarked in between songs. “I’m trying to be healthier.”