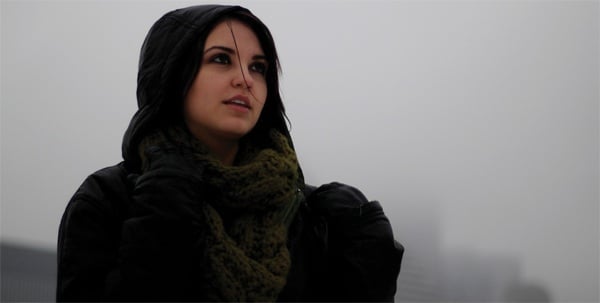 Fusing Thematically Opposite EPs Into a Cohesive Album

Amidst French films and a healthy dose of escapism arose Vague-à-bonde, Nicole Brenny’s solo endeavor, which is now aptly running amok in the pop-electronic realm but always with a sensibility and authorial intent grounding the project. Growing up cloistered in the Midwest, Brenny found herself in the stillness of small town living; what would spell hellish boredom for some, she instead directed into free studio hours, writing music and recording on her computer’s basic sound software. Now, after moving through an electro collaboration with Mark Mallman (Waxx Maxx), guest recording with Gigamesh, and relocating to Minneapolis, Brenny has self-produced a debut album under her Euro-cized moniker.

Entitled Involution/Evolution, the new album treads various textural and lyrical planes – working in and out of 808s and dabs of glitch are vapor-like vocals, airy yet rich, to deliver her content. Good-natured synth lends some tasteful misdirection in the track “MV,” as Brenny’s words consider the fleeting nature of experience, like sneaking some existential theory inside a comic book. Vague-à-bonde, as the debut title suggests, handles some heavier dualisms: internal processing versus outward expression, or dismal perceptions meeting vibrant proclamations, to name a few. “Originally the album was supposed to be two EPs and one was supposed to be darker,” says Brenny. “[That] would deal with the feelings of involution – loss and regret – and then evolution is expanding beyond yourself; it’s about opportunity and growth, so the second EP would have been songs that were more hopeful and pop inspired…less experimental and dark.”

After further consideration of her split record, Brenny settled on fusing the two ideas into one: “It’s a concept of turning something that’s ethereal into something of matter and weight – and also the opposite,” she explains, pledging to the unity of polar ideologies. Effectively, Vague-à-bonde has soldered poetic contemplation into the accessibility of electronic pop – a move of most delicate roguery.