Home / New Music and Video / Interviews and Features / AN INSIDE LOOK: VANCE GILBERT

AN INSIDE LOOK: VANCE GILBERT 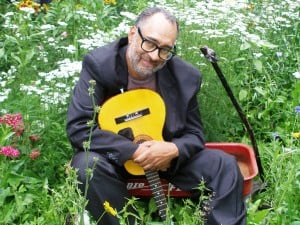 Standing on stage on a hot Atlanta evening and thanking your audience of 4,000 + for their grand applause is what any performer might usually enjoy, and some may only dream of. But to have the great Anita Baker, whom your opening for on that particular night, whisper to you from behind the backstage curtain, “Go ahead, play one more… you were fantastic!” is not something that many can boast on their resume. But one who has, has all the “stuff” to back up that claim, and yet remains as humble as one can get.

Vance Gilbert is as modest and as genuine as they come. A man of many talents, including his charm, quick-wittedness, and candor is a poet and skillful lyricist who finds himself right where he wants to be—in the middle of his own story, and writing its soundtrack one note at a time.

Gilbert, a Philadelphia native, grew up surrounded by an abundance of musical influence. Having no particular favorites, he found himself absorbing the many talents of the golden age of 60s-70s Americana; whether American Bandstand or the “Philly Soul,” he has a passion and deep respect for the variety of musicians that he was exposed to discovered from such an early age. He embraced their sounds, and what they offered. “Philly radio was amazing, and made me want to be like everyone I heard,” Gilbert says. The different worlds and the effectiveness of their music captured and intrigued him with influences ranging from John Coltrane, to John Lennon and The Beatles to Joe Tex—and everything in between. “To hear the groove of ZZ Top, to Earth, Wind & Fire… to the vocal quality of Patsy cline, and Andrea Bocelli…” Gilbert adds, showing his deep appreciation and respect.

Gilbert starting playing the guitar in his college days; first picking up a “no name” 12-string acoustic… He reminisces with his devilish grin, “I sawed off the top six tuning pegs making a homemade guitar…” Taking very few lessons, he was determined to teach himself to play the guitar, and develop his song writing. In 1989 he began his musical voyage breaking in by performing multicultural arts in the public school system as a self-proclaimed “arts gun for hire” assisting with curriculum support via art, puppets, song, and as special performer/story teller.

As a determined and humble musician working his way toward his goals, Gilbert eventually quit children’s theatre to make an attempt at performing. After learning the great American songs to gain a vast repertoire, and begin the challenge, he set out to take on that new venture. “I was my own cover band… I went out to do the ‘acoustic thing,’” Gilbert says, “I’d go out playing in wedding bands, to sitting in with jazz bands…” He’d often play “cocktail hours” in other venues such as lounges in hotels, “I still needed to learn.”

In creating his own style, Gilbert is a natural entertainer. His charming and at times humorous personality is just one of his many attributes, likely picking up his bits of comedy and sharpening his already clever, wit from his days of touring as the opening act for comedy icon George Carlin. But on the serious side, Gilbert takes time to keep learning as a musician, maintaining a higher expectation of himself. From playing coffee houses, free festivals, to venues that range from 40-4000, and having the privilege to open for legends such as Aretha Franklin, and others, Gilbert strives to perfect his talent. “The way I see it: The challenge is getting may ass kicked while I’m doing it, setting the bar, making a higher standard, and trying to come up with something better each time,” Gilbert says.

To date, Gilbert has a collection that spans 10 albums, and a DVD, with another project in the making. He does not restrict himself, but is somewhat careful not to become just a “story teller” but as good of a songwriter as he can be, holding a higher expectation of himself. Treating the songs with care, and to keep the legacy of the story alive, “The lyric in the song writing leaves the legacy,” Gilbert explains, “A performance will come and go in time… these shows, and different performances wither away, but the song itself is the core to everything and has a lasting meaning forever.”

Gilbert enjoys every moment of it, always looking for the challenge and taking on what comes to him, and realizing how lucky he is to have an opportunity to experience it. Although he has seen his hard work produce a positive outcome he enjoys it, and enjoys entertaining the many who have kept returning to see him entertain them. Trying to please everyone and stay true to his act, and finds it through writing songs. “Audiences are always goin to have to figure out how to categorize me… “I want to stay relevant somehow. I’m proud that I am able to make money, (my living), making music… I have no plan to stop, I’m gonna keep going until I can’t stand, and when I can’t, I’ll keep going until I can’t sit, and then… I’ll keep going until I can’t anymore…