Forecastle Festival 2015: Consider Yourself on Notice!

That’s a debated Hemingway’esque philosophy to writing, and pretty much the context and tactic I used to write this preview under, so consider yourself forewarned, to some extent.

Speaking of writing under the influence, and in honor of Louisville-native Hunter S. Thompson, I figured I’d adopt a tried-and-true gonzo spirit for my 7th edition of coverage of Louisville’s Forecastle Festival, taking place this Friday, July 17 thru Sunday, July 19 at Waterfront Park in Louisville, Kentucky.

Now in it’s 14th year, Forecastle Festival takes place over what would’ve been Thompson’s 77th birthday on July 18, and there should be plenty of reminders throughout the festival of this man’s contributions to the world of journalism and Louisville culture.

Originating in 2002 as a humble grassroots neighborhood celebration of music, activism and culture, Forecastle Festival has now morphed into a corporate-controlled, mammoth-sized festival that has all the usual bells and whistles of mega festivals alike: big-name artists, big-dollar sponsors, big-time ticket prices, big-congregations of festivalgoers, and big-hoorah good times. You get what you pay for, I suppose.

As for the big-name artists, Forecastle-regulars and Louisville-natives, My Morning Jacket, will headline along with British-crooner Sam Smith, and hippie jam band-favorite Widespread Panic. Rounding out the other big-name Kentucky artists, you’ve got Cage The Elephant and Houndmouth set to perform, along with a host of other lesser and better known artists of the like. A full schedule of all performing artists, of course, can be found at Lineup.ForecastleFest.com.

Carrying on with its activism element for existence, Forecastle made one of their biggest activism strides to date by announcing this year’s festival will run on a 100% pollution free electricity. For every kWh of electricity used, a kWh will be produced and put on the grid by a pollution-free, renewable source, according to the press release.

“Forecastle Festival was built on the premise of environmental responsibility and for years we’ve worked to be as sustainable as possible through conservation, recycling, composting and the use biodiesel fuel,” said Forecastle Founder and Captain, JK McKnight. “The partnership is a huge leap forward, positioning us as one of the most sustainable, ecologically-focused events in the nation.”

So, ironically, one of the nation’s cleanest and smallest carbon footprint festivals will take place on the banks of one of the nation’s dirtiest rivers. Maybe some of that activism can be channeled into a future plan to do something to clean up the Ohio River. Moving on…

Can’t we all just get along, man?

The answer to that question through the Forecastle lens, is a resounding “Yes, man! We can!.” 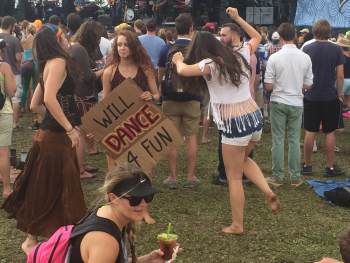 Of all the years I’ve attended this festival, not once have I ever witnessed so much as even verbal dispute, let alone a physical one, amongst festivalgoers. Everyone really does just get along no matter how much fear and loathing takes place.

In a day and age where news headlines rarely report on thousands and thousands of people flocking to a shared space to just get along, this really is something to be proud of.

Even the local police and law enforcement just usually end up sitting around on their fancy four wheelers, just watching, not having to even worry about getting their uniforms dirty. And even being seemingly tolerant to those who are obviously under the influence of whatever-the-fuck. Imagine that.

Other fairly predictable and typical Forecastle features that will most likely take place this weekend:

So, in the immortal words of Hunter S. Thompson, and the final suggestion I made in my 2014 Forecastle Festival review, just “buy the ticket, take the ride.”

Like this? Share this!
Facebook
Twitter
Tumblr
*Jason Ashcraft is a freelance contributor for Performer Magazine, based out of Louisville, Kentucky and Nashville, Tennessee. You can read more random readings from him via his blog: louisvillescuttlebutt.wordpress.com
Related Items
← Previous Story Crystal Bright Teaches Us Why The Accordion Rules Supreme
Next Story → Quick Recap: Ghostface Killah and Raekwon at Boston’s Paradise Rock Club