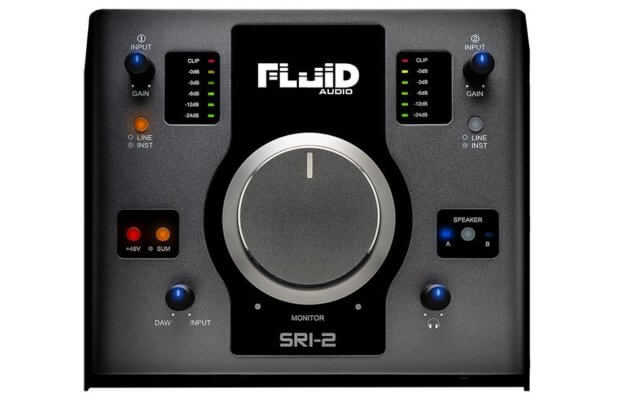 Small format interfaces are great, but the gain in desktop real estate sometimes means a loss in features or functionality, or porting over processing back to the DAW. Fluid Audio keeps things small, but maintains practical features with great sound in their new 2-channel SRI-2 interface.

First off this thing has some heft to it. A lot of smaller 2-channel interfaces can easily get pulled around a desk space with a tug of a headphone cable. Not here; its heavy aluminum chassis feels super sturdy. The first item that’s noticeable is the big monitor knob, with its super smooth feel and response. With a pair of combo XLR/1/4” connections on the front, each input has its own gain control, VU level meter, and is selectable between instrument and line level.

The Fluid Audio SRI-2 interface gets power from the USB connection, which in turn has enough juice to support phantom power for your condenser mics.  There is a SUM function, which means it normally routes input 1 to the left

output, and input 2 to the right side. Hit the Sum button, and it centers them, creating a mono soundscape. When it’s running signal in a mixing situation, it functions like a standard stereo output. Speaking of outputs, there are two sets of 1/4” speaker outputs. The front panel also has a selectable button that lets you toggle between them. A standard 1/4” headphone connection with its own level control is also available.

Now it does come with a copy of Cubase LE, but it works great with pretty much everything from GarageBand to Pro Tools. We had no issues using it with Studio One 4, our office DAW of choice. Right out of the box, it connected to our Mac with no issues and no need for additional software or drivers. It also comes with a copy of Cubase for iOS as well. However, it will need to get power from a separate power connection for connection to an iPad or iPhone. We didn’t get a cable to support it, but we found one in our ever-growing box of cables, and it connected easily to both the stock GarageBand app and Cubase on our iPad.

Like most other interfaces, latency is covered by the unit itself, not the DAW. A great feature on this unit is the DAW/INPUT mix control. It balances the output from what’s being recorded into the unit, and the DAW playback. It works great splitting the signal between the headphones; the SUM control interacts with this feature as well, as it can make it a mono signal output for a better image if need be. Overall, it opens up a lot of possibilities for really low, almost zero, latency tracking situations.

Audio quality was great, the mic pre’s are good, and don’t color things in any unnatural way. Plugging in guitars direct presented no issues, and it worked nicely with some of our fave mics like our trusty SM57’s and our new fave, Blue’s Ember.

What makes it really special is the ability to hook up two separate sets of monitors and toggle between them to check mixes. Truth be told, this is a feature that’s usually not found on interfaces in this class, and it’s really something that SHOULD be standard.

The new interface from Fluid checks all the boxes, with great preamps and a simple layout that’s functional without being intimidating. iOS connectivity makes portable recording super easy and it’s also not any more expensive than most 2-channel interfaces on the market. The ability to connect a second set of speakers makes your DAW a more powerful mixing suite, which is why we’d recommend this unit for the budget-conscious home studio user.