ZIG ZAGS On Their Heavy Metal Philosophy: Finding Perfection in the Imperfect

The environment you find yourself in influences your interpretation of day-to-day activities, your general outlook on life and it molds your personality. Some combination of characteristics can make or break you. In their latest album, Running Out Of Red, Jed Maheu of Zig Zags has certainly embraced everything life has thrown his way.

Growing up in a trailer park, surrounded by kids from Southeast Asia, Maheu developed an interest in music and skateboarding around age 8. By age 13, he started playing music. Because of the style of the people around him and the music they listened to, Maheu had an early introduction to heavy metal.

“The teenagers that I saw on BMX bikes, the fighting, the cars they were driving, broken down muscle cars laying around and hanging out with the older kids who gave me cassette tapes when I was really young” all influenced his musical vision. But it was much more than the environment and the music that made Maheu drive an hour and half to buy his first guitar. Maheu notes, “When you’re a kid and you see an album cover, you make up stories. You make so many assumptions.” When he made the move to LA, the music scene was mostly indie folk and alt-country.  He met all of those types of artists and started playing music with different types of people because he wanted to be in a band. “I wanted to start the band I wanted to see when I was 13,” says Maheu.

Hence, Zig Zags was born and Maheu plays face-melting guitar riffs with a punk rock attitude, perfectly fitting his personality. Growing up he really liked the sound of heavy metal music but when he started going to shows, he didn’t feel very connected with the scene. Looking back on things, he attributes it maybe with something having to do with the style and fashion; people at the shows looked like heavy metal and he did not.

He has an attraction to punk rock because of the sentiment. Punk rock lyrics talk about things that are real and not so far away. “I was frustrated between punk and hardcore because I didn’t know where to take it; I had to find the balance. When I allowed myself to not be embarrassed by heavy metal, I learned better techniques and focused more on playing guitar,” says Maheu. Zig Zags is a punk rock band and Maheu asserts that he will always be a punk rocker first and foremost, but incorporates the fun of heavy metal and its high level of technique. 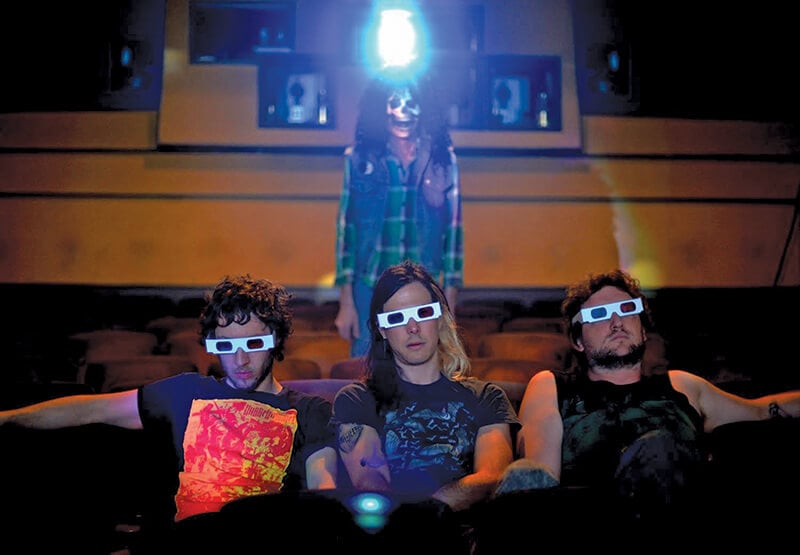 Maheu is drawn to songs that have many layers and ones that have weird little extra notes thrown in here and there. In terms of his creation process, he deconstructs music and smashes it down to a minimalist sound. His strength is his youthful energy and simplicity; not overthinking things is key. Zig Zags’ songwriting process is deliberate. Maheu will record guitar riffs and then collaborates with drummer Dane Arnold until they have a structure of a song. It’s then shown to the bassist Caleb Miller and the band starts rehearing it. They evaluate and decide which parts they like and don’t like. They start peeling it back and only keep the necessary parts of the track. They take the length of the song into consideration, not wanting it to be too long which would risk making it boring and also risk showing off. Maheu wants the music to be “totally enjoyable until the end. I don’t want any filter. It’s a very deliberate process but I play loose. I’d rather hit bum notes than have the solo perfect.” Sometimes we find perfection in the imperfections.

So many weird things happened in between Zig Zags albums but Maheu says they had to keep going, had to keep pushing. They went on tour, lost and gained members and cancelled a tour, so it was nothing short of drama. The theme of Running Out Of Red was structured panic. The album came out of a year of working, dissecting and a running list of songs and recording.

Running Out Of Red is twelve tracks of pure face-melting, punk/metal anthems. They are layered with trippy chords, riffs and strong vocals. Despite Maheu saying that the creative process was deliberate, the songs come across with ease. Their punk rock attitude lets them throw themselves into their playing and leave it all out there and their heavy metal influences come through in the technicality of it all. The rhythmic drumming complements the guitars’ fleshed out melodies. Maheu says that the goal was to strip everything down; they were able to find the balance between not showing off and totally showcasing how badass they are. As someone who didn’t feel welcome in the heavy metal scene, Zig Zags has created an environment where metal and punk fans can come together and head-bang in unison.

Tour life also feels like structured panic, more or less. The rush of feeling like a kid again, sneaking out of your parents’ house, going out and knowing that anything can happen. That is to say, the punk and metal mentality comes into play on tour, too. “Well, I’m in this van and we have to go from one place to another, I have bills to play, shit going on, but oh well. I can’t do anything about it [because I’m in a van], so I relax and focus on having fun,” says Maheu.

When you’re a kid, especially when Maheu was a kid, you feel pressure to conform and to do well; Maheu knew he had to get out of his small town to hit it big. He reflects, “I realize now that when I was a kid, I had to figure out how to have good grades and now I want to focus on what I want to do rather than what I need to do.” At this point, there is no security in anything, so you might as well do epic shit. Running Out of Red