RECORDS THAT CHANGED MY LIFE with Taylor Northern RECORDS THAT CHANGED MY LIFE

My name is Taylor Northern and I am the guitarist for the band Gryffin; I also have a solo project called the Artful Dodger. I’ve been playing guitar and bass for 15 years and first started out as a percussionist before moving to strings in high school. I think the first time I realized music was my passion was in the fifth grade. I got to see Smashing Pumpkins perform at the Omni in Atlanta when Mellon Collie and the Infinite Sadness dropped. I was only ten years and that night, my tiny kid brain was blown to smithereens.

It was really tough compiling this list of only five records, but the albums I’ve chosen are more offbeat and lesser-known gems that have provided me with light and inspiration throughout my teen and young adult years. 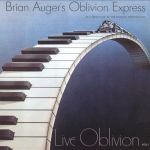 My friend introduced me to this album a few years back and I fell in love with it. Brian Auger and the Oblivion Express were at their peak, performance-wise, on this record – it’s full of warm and lush chord melodies, a driving and powerful rhythm section and the guitar perfectly complements the keyboard and that’s so important, yet rare to hear in groups with piano and guitar. Auger plays some of the most motivational and expressive piano solos I’ve ever heard; this record is like his personal sermon to the crowd. He preaches with the keys all while blending together jazz, blues and funk into one delicious gumbo stew like a master chef. This record truly propelled me into utter oblivion. I was heavy into “math rock” in college – math rock was post-punk that used even odder time signatures and grooves. I dug it because it was weirder than At the Drive In and there were all kinds of monumental post-punk anthems hiding in the measures of those songs. I used to go to the 40 Watt Club and see Cinemechanica perform, and they were bona fide math rock professors; every concert was like a post-punk and abstract jazz lesson rolled into one. Mike Albanese is still one of my favorite rock drummers. I’m really grateful those guys recorded this record. Martial Arts is their masterpiece. It’s a beautiful body of work, like staring at a magnificent piece of architecture similar to Antoni Gaudi’s Park Guell or the Guggenheim Museum. Martial Arts unleashes the dragon and you’ll never forget it.

Dojo Collective
In the Land of Wanderers
(2012) The Dojo Collective was a 10-piece band that I recorded and performed with from 2011-12. I really enjoyed making this record because it was my first real experience recording in a large studio and all of us were in sync. We were so driven and on the same page in terms of making it the best record we could make. In retrospect, I think the Dojo Collective was truly unique in that all of its parts and components came together at the right time and without warning…it was as if some God-like presence had summoned us. We were merely actors in a divine play and I’m very proud to have been a part of that experience. Miles Davis revolutionized jazz when he released Bitches Brew in 1969. It was a whole different brand of jazz dubbed “fusion.” However, I’ve chosen Hancock’s Sextant because I feel Herbie really helped to make jazz fusion digestible and accessible to mainstream audiences, especially with the Headhunters. Sextant is his last bizarre record and it’s like taking a tour through the nether regions of space. On “Hidden Shadows,” when the rhythm section and saxophone first drop, they mesmerize the listener and then Hancock’s infamous Rhodes creeps up like hidden shadows and drags them into a sonic abyss. I still don’t know how they wrote and arranged this material, but it’s one of the most complex musical statements I’ve ever heard. Sextant is akin to a group of majestic celestial bodies that emerge only when you play it; every time the needle hits the record, the listener is entranced by this beautiful and mysterious universe. So Led Zeppelin is not exactly obscure, but I had to include them because they’re my favorite rock band of all time. I really wanted to include Led Zeppelin I-IV and Houses of the Holy, but there’s not enough space to write about all the LZ records I love and embrace. What can I say? I was 14 years old and saw The Song Remains the Same on film, and I wanted to be Jimmy Page and John Bonham, John Paul Jones and Robert Plant blew my mind. I watched the film every single day my freshman year of high school and then found out it was an album, whoa! This record is forever ingrained in my DNA and I’m extremely thankful for the other doors this music opened for me – everything from Cream and Jeff Beck to Black Sabbath and Bert Jansch, Celtic folk music and jazz like Wes Montgomery and Miles Davis. Zeppelin did it all in spades and they’re the best rock band of all time; that song remains the same.

What records inspired you to become a musician? Let us know and you can be featured in a future column. Email [email protected] for more info.