They don’t quite make them like Lenny Kravitz anymore. One minute, the man grinds acid funk riffs mordantly; the next his velvety croon saturates every inch of his ragged guitar blasting. Kravitz’s exacting musicianship was in full force at Boston’s Blue Hills Bank Pavilion this past Saturday in honor of Strut, his tenth studio album. Strut, like most of his previous records, relies on production that is vivid, trippy, and abrasive; twists of eccentricity give way to soulful and sublime arrangements. Kravitz’s catalogue of strummy sing-a-longs sailed high–and were perfectly eclipsed by opener Andra Day’s pulsating performance. Day’s style–a sprawling evocation of devotional R&B and spirit-channeling soul music–mesmerized onlookers with its brassy simplicity and chic execution. Her debut album, Cheers to the Fall, is ripe with unfurling melodies that howl, seduce, ache, and surge at the same time. Day’s live prowess is just as urgent, as demonstrated from her playful cover of Eminem’s “Lose Yourself” to her own anthem of empowerment “Rise Up.” She was truly breathtaking in every sense of the word. 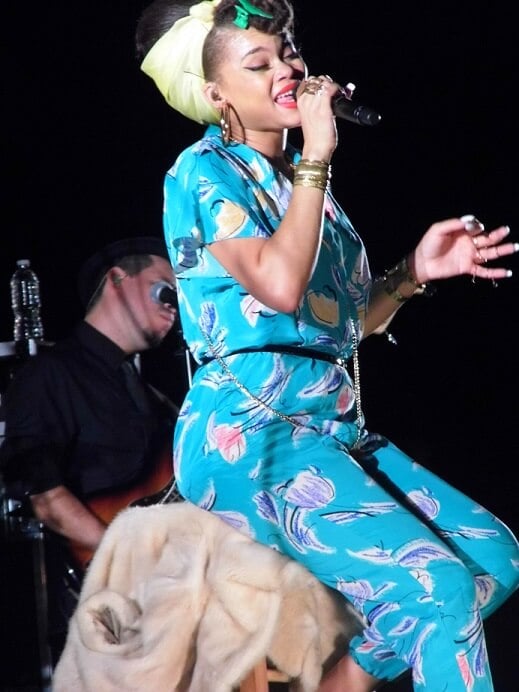 It didn’t take much during Kravitz’s set for the crowd to lose their collective minds–all the man had to simply do was walk on stage in order for that to happen. From newer songs like “Frankenstein” to older gems like “Fly Away” and “It Ain’t Over Til’ It’s Over,” everyone in attendance were on their feet swaying, wistfully nodding, and vying for a chance to get closer to the stage. When Kravitz bravely ventured into the audience toward the end of his set, the clamoring reached epic proportions. Despite being literally pulled in every direction possible, his cocksure energy was practically crawling out of his skin. As he returned to his stage to finish up the show, sweaty yet still invigorated, Kravitz proved that he wears his 25 years in the music industry very well.