Home / New Music and Video / Interviews and Features / The SANGers Room: A New Movement in the South

The SANGers Room: A New Movement in the South 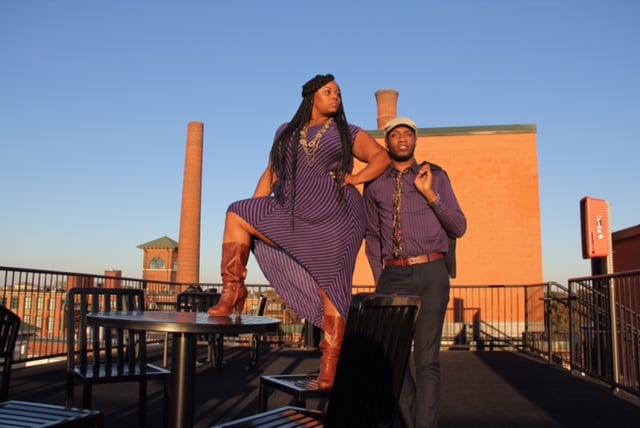 The #SangersRoom was created by Deanna Dixon and Mitch Moffett early November 2013 after their lack of enthusiasm regarding the Atlanta Open Mic scenes.  They decided to create something different that could bring some of the most skilled vocalists all under one roof, sharing in their gifts through campfire style sing-a-longs.  This vision was fueled mostly from their love for impromptu singing sessions with their closest friends in the city.  They figured, if they could bring all of these SANGers together under one roof, the response and attention could be massive.  As they imagined, this concept has taken on a life of its own, and attracted some of the BEST singers to the #SangersRoom.

The purpose behind this concept was not only to unite artist together, but also to cross-market talent through social media.  Using instagram, facebook, twitter, and Youtube as a platform to showcase these electrifying sessions have proven to be game-changing.  As they continue to develop this movement, their ultimate plan is to use the #SangersRoom as a platform to market the hottest talent and create a networking vehicle to open doors that might’ve taken years to cross through without the #SangersRoom as their driving force.   Dixon and Mitch are working diligently to impact the Atlanta music scene in a way that has never been done before, through togetherness, networking, and showcasing vocals that can only be defined in one way………………as SANGing!

What inspired you to create “The Sangers Room”?

Inspiration for the #SangersRoom sparked from Mitch and My love for impromptu, unplugged jam sessions with our friends. We wanted to create a platform to bring all of our  “sanging” friends together to meet and network. The event that sparked the fire in us to finally plan our first jam session was a singing engagementat Studio 630.  Mitch was asked to perform at this new venue, and to our surprise, little to no one showed up for this event.  In spite of the sparse attendance, this venue inspired us to start the #SangersRoom in hopes to eventually move our event to this new space.We knew that if we started telling our friends about these jam sessions, we could easily pack out that venue.

What do you hope to accomplish?

The #SangersRoom wants to break the stereotypical barriers that have been created by the competitive nature of the industry, and show the world that artists can come together to uplift, inspire, and push each other’s artistry to the next level through displaying the highest  level of professionalism and skill.

Who are your influences as a singer/songwriter/ musician?

Mitch and I may answer this question differently, considering his musical background has  been heavily influenced by his classical and musical training at Morehouse College.  However, my influence came directly from my deep church roots.  I have learned most of what I know from singing and watching my mother in the church. In addition to this, Brandy Norwood has made a major impact on the way that i finesse lyrics, melodies, and my tonality in songs.

What do you think are the most important skills in succeeding as a singer/songwriter/ musician?

The most important skills to be successful, is preparation and professionalism.  In a city like
Atlanta, a lot of the people here are musically talented, but not all put in the time and effort
to perfect their skills.  In addition, to this, you have to work hard and be professional at all
times.

How long have you all known each other? How did you meet?

Mitch and I met earlier this year at a performance at Acoustix Jazz. He knew of me through Youtube, and we immediately connected through the music that night, we exchanged phone numbers and became fast friends.

How did you come up with the name?

It’s funny, because we started planning our first vocal jam session, and I (Deanna) started throwing out names, and the one that Mitch liked the most was “the Singersroom,” however he said we should modify it the SANGersRoom to reflect the caliber of talent that would be displayed at these jam sessions.  The rest is history.

What are your immediate music career goals?

Deanna: I would love to become a well-respected songwriter and vocal producer, turn the #SangersRoom concept into a nationally syndicated television show.

What are your long-term career goals?

Deanna: My long-term career goals include acting, singing/writing internationally, and creating avenues for other artists to be heard by the world.  That is something I am truly passionate about.

How would you define the word “success”?

Success is defined by your ability to leave behind a legacy that you and your family can be proud of. Mitch and I are working hard to use our musical influence to make an impact here in Atlanta.

What singing techniques are used during your meetings?

The whole concept behind our jam sessions is to develop our songwriting skills, improvisational skills, and preparation when faced with outside disruptions. So we have created games and freestyles that allow us and the other vocalists to put their skills to the test.

What type of vocalist do you encourage to attend the sessions? Why?

We do not discourage any singers to come, but the true concept behind our sessions is bringing the “cream of the crop” to come together and showcase their skills. We are looking for the SANGERS!! Hence the name…

What advice would you give to up and coming vocalists?

Don’t be afraid to be scrutinized, challenged, and sing in front of others that you might be intimidated by.  All of your experiences help to prepare you and grow as an artist.  WE are all developing, no matter how great you may think someone might be; they are still working to perfect and improve their craft.

How have your skills as a vocalist evolved since you first began singing?

Personally, I have learned how to overcome my nervousness when performing.  I used to shake like a leaf prior to and during my vocal performances.  I now have breathing exercises that help to calm my nerves prior to my performances.

What’s next for you all?

The next big thing for the #SangersRoom would be to turn this idea into a nationally syndicated television show, and create workshops that will help to develop other artists that might not feel as confident in their skills.  The sky is truly the limit!